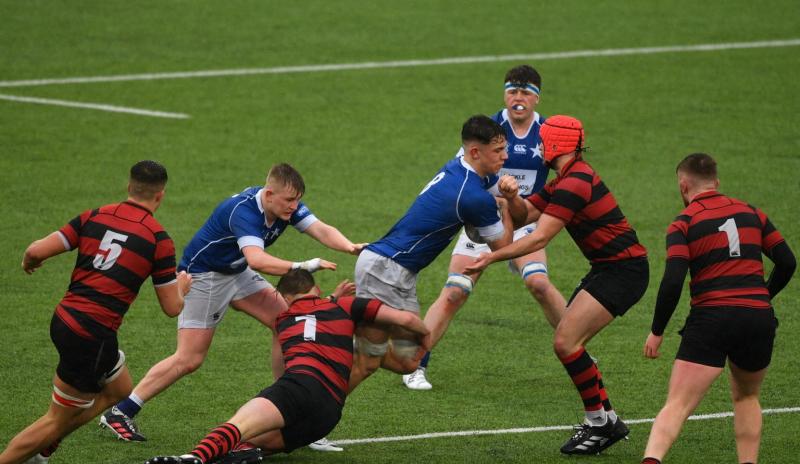 Trailing to two Sean Naughton penalties at the break, Mary’s turned in a more impressive showing in the second 35 to make sure of their place.

They threw caution to the wind and rain early on and looked to Evan Moynihan’s offload to set prop Andrew Sparrow free in a sign of their intention to keep ball-in-hand.

Kilkenny wing Dean Symes shook the ball out of full-back John Brennan’s hands and the Marble City kids had the big boots of half-backs Charlie Kennedy and Sean Naughton to chase after.

From a Kennedy bomb, lock Mark Stanley was able to force a penalty for Naughton to go close from a kick on halfway.

When Luc Manselli drove up the guts, Stephen Smyth glued onto the ball for a penalty. St Mary’s, over-eager to push up, advanced ahead of the kicker for Naughton to split the posts in the 13th minute.

The penalty count was mounting for St Mary’s, Stanley snatching another at the breakdown before Kilkenny’s lineout malfunctioned again.

Zach Furlong’s quick tap was recycled and Naughton sent a tumbling kick through for Stanley to poke to the posts where wing Stephen Kennedy covered brilliantly.

Kilkenny were on the front-foot, centre Harry Rogers’ leg drive gobbling up ground until Louis McGauran ripped the ball away in the shadow of the posts.

But, St Mary’s insisted on running out of trouble, Smyth clamping down for a penalty at the breakdown and Naughton doubling the lead in the 22nd minute.

Finally, the Rathmines school went direct, Manselli putting the head down and McGauran streaking between defenders before captain Rogers got in under the ball to prevent a try.

Another nasty dribbler from Naughton was followed by a high ball from Kennedy which Brennan gathered.

When Kilkenny refused to engage at a maul, St Mary’s took advantage to make easy metres and hands in the ruck offered a shot at three points which they spurned for a maul that broke down on half-time.

In a change of strategy, Conor Tracey launched a garryowen, forcing a knock-on for a scrum.

Then, No 8 McGauran stole a loose ball to spark an attack, hooker Mark McHugh unable to ground the ball over the line.

O’Brien and replacement Conor Tracey broke tackles to earn a penalty which Gilbourne could not convert.

However, the game was being played out in Kilkenny’s half, Sam Dudley’s high tackle offering a shot at the posts for Tracey to halve the deficit in the 51st minute.

Now, it was Kilkenny making the errors, the greasy ball slipping forward for knock-ons, and Tracey’s lofted balls were a problem.

Replacement Peter O’Beirne picked off an interception to get in behind Kilkenny, the forwards taking over for lock Tom McEniff to carry, Sparrow to do the same and loosehead Fionn King to secure the try for Tracey to convert for 10-6 in the 59th minute.

The onus was now on Kilkenny to turn it around, Lucca Jennings seeing yellow for illegal work at the ruck.

The extra man and the advantage of a lineout throw inside the 22 put Rogers on the ball and the runners arrived to force a penalty for Naughton to make it a one-point game in the 63rd minute.

Straight away, Kilkenny lock Stanley was penalised at a ruck, but Tracey’s kick sailed just left of the upright.

Nonetheless, St Mary’s were in the right area of the field and had no intention of giving it up.

McGauran and Sparrow made vital yards to go close, centre Ross Moore batted away tackles to keep Kilkenny pinned down and O’Brien eventually drove low for the clinching try, converted by Tracey at the final whistle.