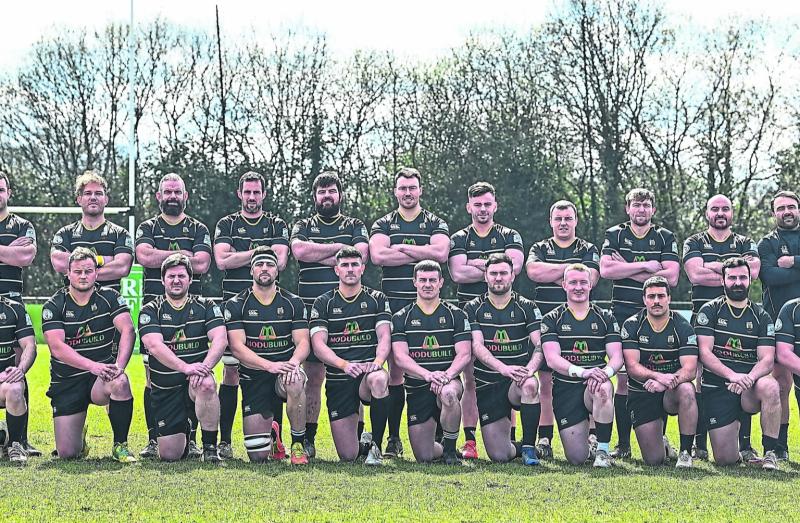 The Kilkenny team who beat Dundalk to earn their place in the Provincial Towns Cup final. They will face old foes Ashbourne in the decider this Sunday in Cill Dara RFC at 3pm Picture: David Fitzgerald

With the Towns Cup final, the last game of the season for Kilkenny, taking centre stage on Easter Sunday, it’s time to reflect on the season while looking forward to what promises to be an eventful final against old rivals Ashbourne.

The coaching team of David O’Connor and Steve Ashmore assembled a talented squad; the addition of past Kilkenny College pupil Roy Stanley and Finland international Jake Pratley were welcome additions and supplemented the existing player base.

The team boasts some of the most talented junior players in the province, including hooker Ben Devlin, second row, Wes Carter and the exceptional Gary Dunne at No 8. In the back line, club captain Jake McDonald is the envy of all sides, while the backline is bolstered by the ever-steady Liam Caddy and Podge Mahon. In Joe Manuel there is a physical presence which is of significant benefit to the team’s chances.

Kilkenny’s league form was bumpy, but significant injuries at crucial times did little to help their case. From November to January they were without 11 members of their first squad. They recorded just one win in that period, a hard-earned victory over Gorey in Foulkstown.

The turn of the year saw the side become embroiled in a relegation battle alongside Gorey, Dundalk, Suttonians and Sunday’s opposition, Ashbourne. A heavy loss at home to Monkstown was followed by an encouraging performance against Bective Rangers. The return of talisman Gary Dunne from injury, coupled with many other fitness boosts saw the side gain in confidence and believe that they could turn things around. In the penultimate game of the season, they salvaged a last minute 17-17 draw to relegate Dundalk, courtesy of a spectacular touchline conversion by Hugh Corkery.

In the final home game of the season, they beat Ashbourne, picking up a four-try bonus point. This saw the team finish seventh in the league, enough to avoid automatic relegation and enter a promotion/ relegation playoff against Wicklow. Played in Carlow, Kilkenny blew the opposition away to retain their status in the premier division of Leinster junior rugby.

Following the conclusion of the league campaign, all attention turned to the Towns Cup. A bye in the opening round was followed by a tough away tie against Edenderry in the second round.

Edenderry made life difficult for Kilkenny, who trailed at half-time, but they chipped away at the deficit to earn a 34-20 win on the road.

Victory set up a local derby against Carlow. In an error-strewn performance, where their discipline was poor, Kilkenny allowed Carlow every opportunity to dominate the contest. However, Kilkenny made their chances count and an early second half try by David O’Connor, before a Carlow onslaught, was enough to see the Cat’s name in the pot for the semi-final draw.

In the semi-final Kilkenny were drawn against a familiar opposition, in the form of Dundalk, the same side that Kilkenny relegated just weeks before. Knowing the physical proposition posed by Dundalk, David O’Connor opted to select four forwards and one back on the bench. This enabled Kilkenny to carry the experienced and physical trio of Martin Leahy, Joe Moynihan and Simon O’Hara in reserve.

Kilkenny demolished Dundalk in the opening 20 minutes, but again, complacency and errors afforded the Louthmen several opportunities to stage a comeback. They did and pushed Kilkenny to the 85 minutes, with Kilkenny holding them up over the line to finish the affair.

And so for Sunday’s final, which is a repeat of the 2014 decider, where the Meathmen stole victory by a narrow margin. Many of the Kilkenny team from 2014 and the beaten 2015 team are still central players in the current team - Martin Leahy, Joe Manuel, David O’Connor, Podge Mahon, Liam Caddy and Wes Carter will all be hoping that it’s third time lucky to collect a much-coveted medal.

If Kilkenny are to claim the honours they will be relying heavily on their dynamic backrow, players of Gary Dunne, Shane O’Riordan, Roy Stanley and David O’Connor to dominate. Their second rows of Liam Phelan, Andrew Warner, Simon O’Hara, and Wes Carter are all very different players, but all bring a lot of intelligence and work rate that will be most important.

The biggest challenge for Kilkenny will be in the front row. Ashbourne posed a physical and experienced trio, including Leinster junior stalwart Alan Wall, but there is no doubt that Conor Dempsey, Ben Devlin, Martin Leahy, Drew Phelan and Joe Moynihan will relish the challenge. The Kilkenny backline is electric, with the blossoming combination of Pratley and McDonald, at halfback, if Kilkenny can create a tidy platform there is no doubting the damage that can be achieved. Centres Joe Manuel will make yards and Podge Mahon will exploit the smallest of gaps to punish any side, while Aiden McDonald, who played on the wing and scored a super try in the semi-final, is a talented operator.

Kilkenny’s back three options are excellent, Liam Caddy’s experience, organisation and leadership in the No15 jersey is essential to Kilkenny’s chances.

Winger Hugh Corkery has been a vital player for Kilkenny this year; his versatility and his kicking prowess has been central to the recent revival in form. Jack Walsh is a talented and powerful runner and his big boot will be useful in pinning any option back, while Lyndon Brannigan’s defensive exploits have been very important to the side’s efforts and does not lack in workrate and endeavour for the team.

It has been 20 years since Kilkenny last brought the Towns Cup back to Foulkstown, and if they are to bring it back this year, they will need exemplary discipline. Two players - 2014 captain Joe Manuel and Jake McDonald - will both be looking to follow in their fathers’ footsteps to win the coveted competition.

This could be Kilkenny’s year. They will not fear Ashbourne and will give their all to claim Ireland’s oldest rugby trophy.