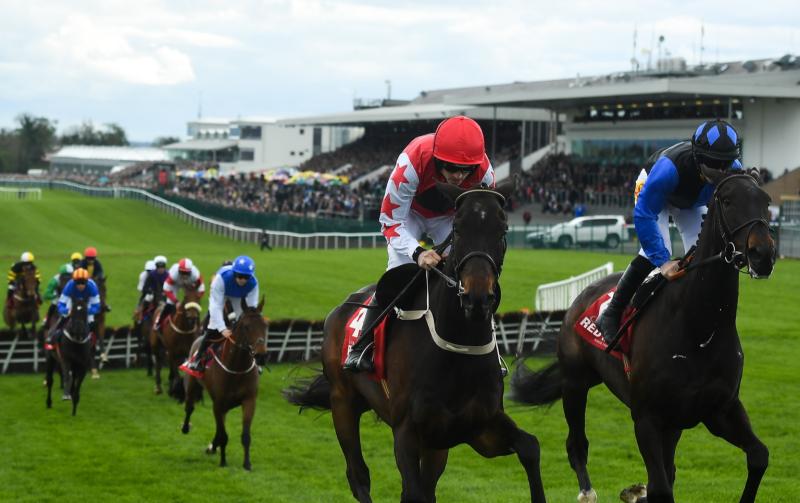 Crowds will return to the Puchestown Festival for the first time since 2019.

The 2022 Punchestown Festival is being billed as ‘The Great Comeback’ as the grandstands are set to fill up to witness Ireland’s biggest racing meeting for the first time since 2019.

But it's not just the public that will be packing into the famed Kildare auditorium of jump racing to reacquaint themselves with the five-day festival from Tuesday April 26th to Saturday April 30th, as equine stars such as Clan Des Obeaux, Allaho, Minella Indo, Energumene, Chacun Pour Soi, Klassical Dream and Paisley Park are just some of the household equine names also returning to Punchestown.

Today marked the forfeit stage for the opening three days of the Punchestown Festival and the Closutton clash of Willie’s Mullins’ leading two-mile chasers Energumene and Chacun Pour Soi is well and truly on in the William Hill Champion Chase, with Joseph O’Brien potentially throwing a spanner in the works with recent Aintree winner Fakir D’oudairies getting an entry although the trainer admitted a return to three miles might be on the agenda for him.

Envoi Allen and Captain Guinness may represent Henry de Bromhead, while Andy Dufresne is in the mix as well as Allaho although the latter is also more likely for Wednesday’s vintage renewal of the Ladbrokes Punchestown Gold Cup.

Paul Nicholls is no stranger to Punchestown success and for the second year running will try to do the Aintree/Punchestown double with Clan Des Obeaux who heads the entries for the Ladbrokes Punchestown Gold Cup alongside the winners of three Cheltenham Gold Cup’s, Al Boum Photo and Minella indo.

Nicholls said on Thursday: “I’m really looking forward to next week. We’re always made very welcome. We love it and in the future, maybe we’ll have even more to come. If we have the right ones, we’ll be there.

“It’s about running the right horses in the right races. We thought that the Ladbrokes Gold Cup would suit Clan and that’s why we’re coming back again this year. It’s gonna be a tough old race if Allaho runs and he had a harder race at Aintree than last year but it was a career best in many ways.

“But this race suits him, the track suits him and the way he ran last year shows it suits him and you’ve got to target those races for him.”

Nicholls added: “It’s a waste of time running him around Cheltenham. He hates it, as Silviniaco Conti did but you’ve got to run them in the right races, as we did bringing two horses to Punchestown last year and they both won.”

Speaking about Fakir D’oudairies, who is among the 13 in Wednesday’s feature race as well, Joseph O’Brien said options would be kept open for now.

“Fakir is an intended runner in one of the Grade 1s, probably more likely the Ladbrokes Gold Cup over three miles than the William Hill Champion Chase over two but we’re keeping our options open,” O’Brien said.

“He has been good since winning at Aintree. We decided to sidestep Cheltenham in favour of the Melling Chase and that decision paid off and I thought he did it well.

“He has come out of the race well and we’re looking forward to lining up at the Punchestown Festival now.”

On Thursday the feature event is the Ladbrokes Champion Stayers Hurdle, a race Patrick Mullins commented on yesterday by saying he would be disappointed if Klassical Dream couldn't claim back-to-back renewals. Paisley Park is a fascinating inclusion for trainer Emma Lavelle and owner Andrew Gemmell, however.

Mullins said on Wednesday: “We got the good start in Leopardstown and (at Cheltenham) Klassical started backing up backwards and Paul ended up jumping off last and we are 10 lengths behind Flooring Porter straight away so was that just the swing. I was a little bit disappointed with how weakly he finished. He travelled up there very well but I don’t think that was him at his best and I’d be disappointed if he couldn’t win next week at Punchestown.”

Among his 12 potential rivals are Cheltenham Festival winner Commander Of Fleet and Aintree victor Sire Du Berlais, both for Gordon Elliott who looks to hold his strongest hand in this championship race.

“Both horses are in good form and have come out of Cheltenham and Aintree well so we’ll hopefully let them take their chance,” Elliott said.

In the novice hurdle ranks over the opening three days, champion trainer Willie Mullins will characteristically keep his cards close to his chest for now as he is responsible for eight (Bring On The Night, Dysart Dynamo, El Fabiolo, Gibraltar, Ha D’or, Kilcruit, Sir Gerhard and State Man) of the 15 entries in the Bective Stud Champion Novice Hurdle and six (Bronn, Classic Getaway, Kilcruit, Minella Cocooner, Ramillies and The Nice Guy) of the 17 that stood their ground in Wednesday’s Irish Mirror Novice Hurdle.