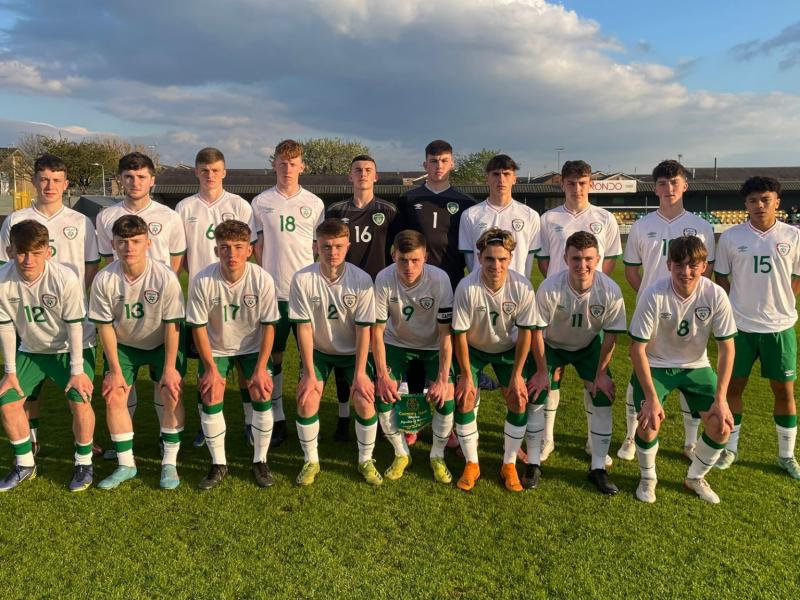 The Republic of Ireland Schools Team

The Republic of Ireland Schools lost out to a second half brace as the hosts lifted the inspiresport Centenary Shield in Caernarfon FC last night (Thursday, April 21) following a 41 year absence.

Goals from Jake MORRIS and Roan PIPER inside a ten minute period were enough to see Marc Williams’ side pass the Irish test as winner took all in the final game of the 2022 series.

Wales only needed the draw going into the final game while Ireland required a win.

The Republic of Ireland will rue missed opportunities in the first half as they craved out a number of opportunities early on but just couldn’t convert in front of goal.

Welsh defender Louis Holden nearly poked the ball into his own net in the fourth minute attempting to clear a dangerous cross from Michael Raggett following a delightful long ball from Eanna Clancy.

With 12 minutes on the clock, the lively Raggett (St. Kieran’s College, Kilkenny) had a wonderful opportunity to put his side ahead following good work down the right flank by Leon Ayinde (Coláiste an Spioraid Naoimh, Cork), but his effort went just wide of the front post.

Lennon Gill and Kieran Cruise had half chances in the box midway through the half but their final product lacked power and the busy Ifan Knott between the Welsh posts averted their attempts.

Despite the Irish possession, it was scoreless at the break.

Again it was Gill and Raggett that required Knott into some fine goalkeeping early in the second period.

A body blow for the visitors as Wales scored on 67 minutes with Jake MORRIS converting from close range.

Their tally was doubled ten minutes later when Roan PIPER popped up to ensure the silverware would remain in the Welsh town.

Zach Dunne (Presentation Brothers College, Cork) forced Knott into another great save with only a minute left in the game. It just wasn’t meant to be for the traveling Irish as the Welsh saw out the game with a clean sheet.

A historic victory for the Welsh side as they last captured the title back in 1981.