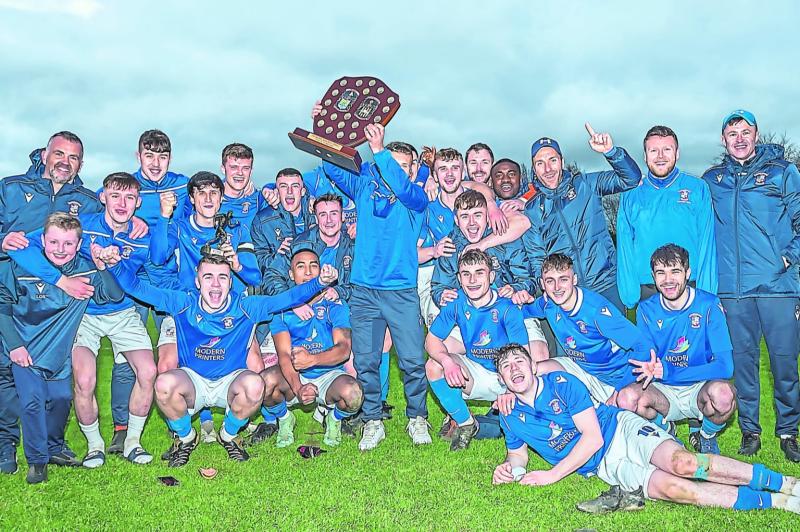 The first major silverware of the junior soccer season in Kilkenny was handed out last Saturday as Freebooters and Thomastown locked horns in the Pat Maher Shield final.

Both sides have been competing behind Evergreen near the top of the St Canice’s Credit Union Premier Division and with the league leaders all but champions in name, the Pat Maher Shield Final offered the chance for some early season success.

It turned out to be a cracking game as the teams shared five goals with the Kilkenny city side coming from 2-0 down to claim a miraculous 3-2 victory.

Thomastown started the better though and within 20 minutes they opened the scoring when Nathan Sherry latched onto a corner from Rory Monks to head to the net.

The advantage was then doubled a couple of minutes later when Monks made it two assists when his well guided free-kick found Steven Connolly who like Sherry found the space to place a header into the Freebooters goal.

Freebooters were very much on the back foot at this stage but they did manage to get a goal back just before the interval when Paddy Cahill curled a free kick home and by the half-time whistle, it was all to play for.

That goal seemed to deter Thomastown who had a big crowd in attendance and by the hour mark, things were all square when a mix up in the United Park outfit’s defence allowed Jamie Holden to pounce and level up matters at 2-2.

Both sides then went all out to try and find a winner and while Thomastown did have their chances, they were rocked when Zach Bay Hammond netted the winner for Freebooters. His free runnning style allowed him to make some space and he fired a shot into the bottom corner.

Thomastown did their best to try and find a goal that would have forced extra-time but Freebooters held out to secure the title.

’Booters will be hoping it’s the beginning of a successful period for the club as they still remain in two other cup competitions.

The city side are already into the quarter-finals of the McCalmont Cup while they are in Leinster Junior Cup action this weekend against Carlow’s New Oak Boys.

Thomastown, on the other hand, will see last Saturday’s result as a real missed opportunity and their main focus will now be on the McCalmont Cup last eight when they play host to Fort Rangers after their league ambitions petered out over recent weeks.

As well as the Shield final, there was also a couple of crucial league games over the Easter weekend including Evergreen’s trip to Graiguenamanagh to take on Highview Athletic in the sole clash in the St Canices Credit Union Premier Division.

As expected Evergreen maintained their incredible unbeaten run as they made it 11 wins in 12 games in a 4-0 victory.

Lee Delaney, Mikey Drennan and a double from Tommy Earls sealed the win.

There was also action in the LFA O’Neills Junior Plate where Castlewarren Celtic lost to Leixlip.