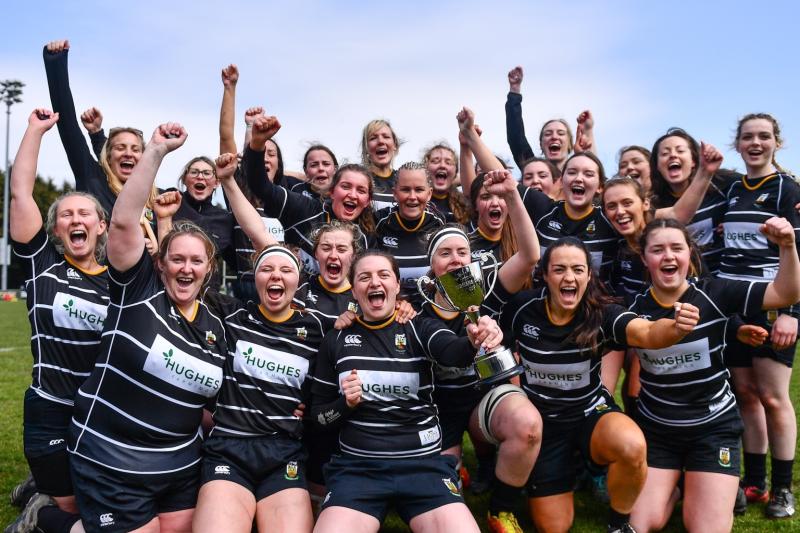 The Kilkenny players celebrate with the cup after defeating Tallaght at Old Belvedere on Saturday. Pic: Ben McShane/Sportsfile

A hat-trick by captain Emer Kelly meant Kilkenny’s name was etched into the record books as the inaugural winners of the Leinster League Division 5 final.

These two showed no signs of sluggishness from the mid-morning kick-off, even though nerves played a part in a shaky opening quarter.

It was understandable as both sets of players looked to settle into simple patterns, Kilkenny moving the ball into space, while Tallaght preferred a more direct avenue.

The mistakes and errors gradually gave way to a better flow, beginning with Kilkenny’s insistence on delivering a try by No 8 Lieke Holden in the left corner.

It was the signal for Kilkenny to move into overdrive, Kelly freewheeling down the left for a superb individual try which was quickly followed by a similar effort from left-wing Lucy Harte, the latter converting both for 19-0 in the 37th minute.

However, Tallaght were driven on by Louise Leonard and scrum-half Eileen Shanahan before flanker Martina Fitzpatrick twisted to the line for Grainne Flood to convert for 19-7 at the break.

The second period sprang into life a lot sooner as Kilkenny took advantage of the binning of Leonard for captain Kelly to sprint around the outside of the defence, Harte’s conversion making it 26-7 in the 52nd minute.

Soon, Tallaght were peppering the line with one-out runners until out-half Grainne Flood put centre Chloe Conroy-Kearns over on the left for Flood to convert for 26-14 in the 56th minute.

The ensuing stalemate centred around uncompromising defence as tackles stuck until Kelly spotted a hole in midfield and was quickly through to the posts for Harte to convert, essentially sealing the issue.