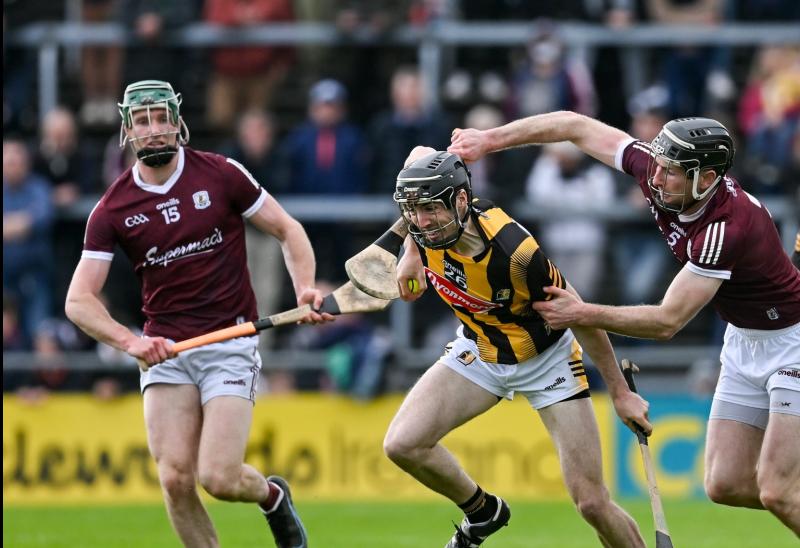 om Phelan of Kilkenny is tackled by Padraic Mannion of Galway during the Leinster GAA Hurling Senior Championship Round 3 match in Pearse Stadium. Pic: Brendan Moran/Sportsfile

Kilkenny suffered their first defeat in the 2022 Leinster Senior Hurling Championship when a stoppage time Conor Cooney free helped Galway to a one point victory in a pulsating contest in Pearse Stadium.

The Cats looked dead and buried prior to sub John Donnelly netting an equalising goal on the cusp of full-time but after Galway midfielder Tom Monaghan was fouled by Paddy Deegan in the very next play, Cooney stepped up to nail the winner to the delight of the majority of the 14,034 in attendance.

Kilkenny played against the wind in the opening period but with Eoin Cody causing chaos up front they looked in a decent positon when the Ballyhale man netted a 5th minute goal before then setting up Billy Ryan for another three pointer a couple of minutes later.

Brian Cody's side could never really kicked on from the goals though and in a spell where they notched 1-6 without reply Galway raced ahead on the scoreboard.

Wing back Fintan Burke knocked over a couple of sideline cuts while a mistake from Kilkenny goalkeeper Eoin Murphy allowed Johnny Coen to score Galway's only goal in the 24th minute as the Tribesmen led 1-17 to 2-8 at the break.

Conor Cooney pushed Galway's lead out to seven at the start of the second half but they then went through a scoreless 20 minute period as Kilkenny bounced back in style.

Alan Murphy appeared as a half-time  substitute for TJ Reid and the Glenmore led the Cats revival with Walter Walsh, Eoin Cody and Mikey Carey also chipping in with points.

Kilkenny managed to get back on level terms by the 55th minute but then Galway hit three successive points courtesy of Brian Concannon, Joseph Cooney and David Burke.

Alan Murphy then knocked over a brace of frees but Galway still looked like they'd last home with Concannon and Conor Cooney adding to their tallies.

Donnelly looked like he'd got Kilkenny out of jail but Conor Cooney had other ideas as he showed nerves of steel to knock over the winner.