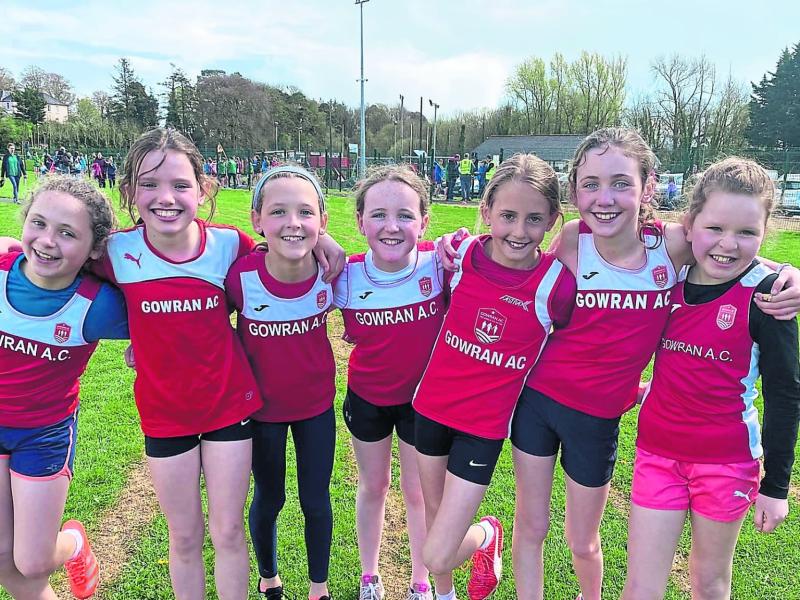 Two big local athletic events were held over the Easter holidays. On Holy Thursday the Streets of Kilkenny 5km captivated a city audience, while Easter Monday saw the resumption of the St Senan’s Track and Field Open attracted a massive attendance.

Now regarded as one of the premier 5km road races in the country, the Streets of Kilkenny had 713 finishers, with Donal Brannigan of Drogheda being the oldest finisher at 72 years of age.

Crossing the line in first place was Kilkenny City Harriers (KCH) athlete Eoin Everard (KCH) who recorded 14.11 for the 5km. This broke the 2019 course record set by Hiko Tanosa (DSD) and earned the Harrier a first prize of €300 and €500 bonus as the new record holder. It was his second time to win the event on home soil.

More records tumbled during the race as Michael Harty of East Cork set a new Irish Masters over-40 record of 14.14 surpassing the old mark of 14.21, which was previously set by Brian Maher (KCH). Hartly finished second, just three seconds behind Everard, with William Maunsell (Clonmel) in third place in 14.17. Brian Maher (KCH) also surpassed his over-40 record when he recorded a time of 14.18 to finish in fourth place.

Easter Monday has been reserved for the St Senan’s AC Open track and field event for the best part of the last 45 years – with a break for Covid.

Blessed with a lovely grass track amid an idyllic riverside setting, the Kilmacow-based club knows a thing or two about running this event.

“We could do it with our eyes closed at this stage,” said Elaine Kearns, one of the most efficient organisers the club has ever had. Kearns has been organising the results team for the last 18 years. A former athlete herself, she loves the buzz of the open track and field.

“You don’t get too many of them these days,” she said. “The St Senan’s event attracts clubs from as far as Cork, Clare, Galway and the entire East coast,”

Absent from this year’s event for the first time was Perri Williams, who is usually seen popping up across the track with her camera. However, there was an army of St Senan’s officials out on the day to help – across all locations - to capture plenty of pop-up moments provided by one of the biggest crowds the club has seen since the 1990s, when club founder Ed Williams was organising this event.

“We heard great things about St Senan’s,” said clubman Willie Walsh. “In 2020 they were the only club to get a cross-country event off the ground.”

Word had travelled across the country about the club’s great organising skills and ‘go-get-em’ attitude. Athletes from Trim, Newbridge, Cookstown-Millview, Wexford, Waterford, Tipperary, Dublin and across the Midlands attended.

On the start line Bill Lacey teamed up with Tramore AC coach Michael Gregan, who has been acting as starter for this event since 1990.

“I have 32 years starting this event this year,” said the 83-year-old, who still coaches athletics for his local club and still jumps hurdles like a young man. “I love coming out to Kilmacow.”

Bill Lacey cast a smile as Michael Gregan hopped over the ropes to start the girls’ under-12 race, an event that consisted of 51 athletes lining up for the 700m course. Lacey himself has been helping out since he retired from athletics back in 2000.

“Ah sure it’s a great event,” he commented. “It’s great that the competition is going again.”

What is so special about this track and field is the co-operation between clubs, links St Senan’s have forged over the last 45 years. Clubs like Brow Rangers, without whose help the shot-put event would not run as smoothly. Murty Kelly was in charge this year, helping to push up the standards. A man of few words, his comments were of positivity and joy at seeing plenty of young talent who came to test their winter training at the first outdoor meet of the season.

Eddie Manning of St Joseph’s AC was at the inaugural event back in 1978 as a runner. “The standard was too high for me to medal,” he said, “but I always loved the buzz and I still do.” Clubmate Bob Saunders is a familiar voice on the PA system, while there is plenty of local help too. Stella Butler may have retired from her duty at the shop after decades of stellar service, but Lisa Wallis, Celia Monahan, Denise Quinlan and many others made light of the hard day’s work.

Gowran AC won the overall trophy from Carraig na Bhfear and Ferrybank AC. The local club had to be content with wins in the older age groups, with Eve Dunphy stealing the show as she earned her fifth medal of the day after a superb run in the under-16 700m.

Isabelle Kearns (Naas) won the under-15 javelin with a new personal best (PB).

“We are delighted to have a javelin competition” said her parents, “it is not too often you get a javelin event outside of championships,”

KCH won the girls’ under-10 and under-12 relays along with the boys’ under-12 competition.