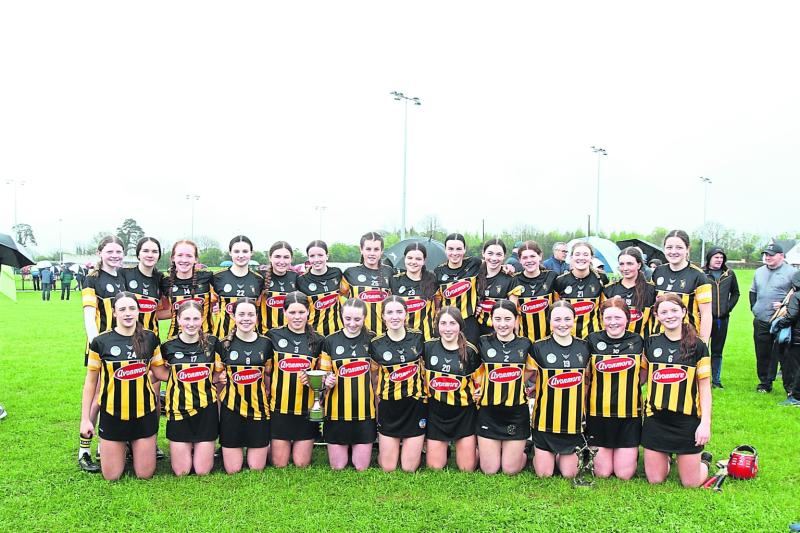 The Kilkenny under-16 camogie team who beat Dublin to lift the Leinster title at the weekend. Picture: iLivephotos.com

Kilkenny proved much too strong for Dublin in the Leinster Under 16 Shield final in Carlow on Sunday afternoon.

Dublin replied with two points, until Muireann Gannon pulled on the ball sending it into the back of the net.

Tara Roche was pinpoint perfect with frees throughout the match, scoring the first from a 45.

Although Kilkenny were in the lead they still gave away six frees in the first 15 minutes as they were putting undue pressure on themselves.

Dublin threw over another point but Muireann Gannon once again hit the back of the net in response.

Dublin Kept the points ticking over but once again Kilkenny came back with a goal from Ciara Dunne and a point from Tara Roche.

Two more points from Dublin and one from Kilkenny left the score 2-4 to 0-6 in favor of Kilkenny but in the final few seconds of the first half Dublin got lucky and scored a goal.

A Dublin point and a free from Tara Roche kept it even enough at the start of the second half.

Ciara Dunne got Kilkenny's third goal of the day but Dublin kept themselves in it with a point.

Player of the Match Ashling Browne found a loose ball and hit a bullet of a shot from the end line, which resulted in a goal.

Aisling Browne and Ciara Dunne duly raised the green flags once again with both being constant threats in the full forward line.

Aisling Browne was the well deserved Player of the Match constantly rounding her players and attacking.

Anna Doheny had a phenomenal game at centre back for the winners with long range balls being dropped into the dangerous full forward line creating a lot of scores.

The backs as a unit played well too as they kept a decent Dublin side at bay.

It proved to be a momentous day for underage camogie in Kilkenny overall, showing the potential that is there coming up through the ranks for the next few years.