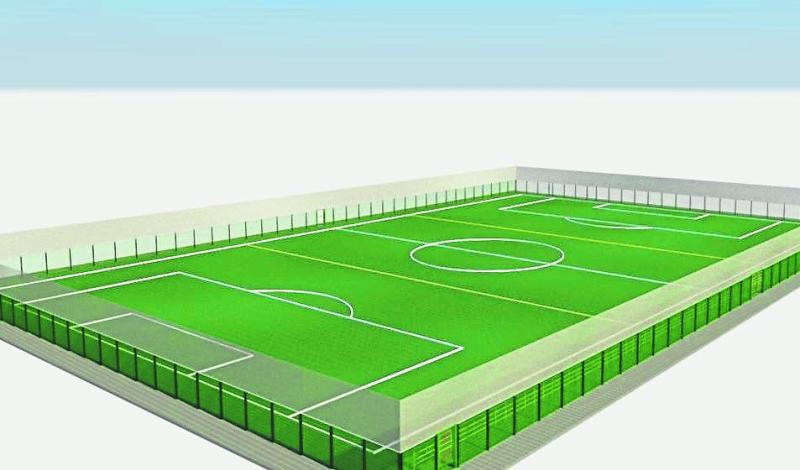 A render of the new Highview Athletic all-weather pitch

The red-letter day has finally arrived for Highview Athletic, who confirmed their field of dreams is about to become a reality.

The Graignamanagh club unveiled details of their new full-size all-weather pitch. Construction on the Harristown project is expected to begin in a matter of weeks.

“We are excited to confirm that contracts have been signed to start work on our state of the art pitch,” they said when announcing the news. “The pitch will be fully floodlit and complete with perimeter fencing, ball netting and spectator railing. We have also added a community walkway with provisions for lighting which will be accessible at all times and open to the public.”

Work on the project will start near the end of May, with a groundbreaking ceremony planned for the end of the end of the month. It is hoped to have everything finished in time for the start of the 2022/23 Kilkenny & District League season.

News of the green light was welcomed by all in the club, with the dedication and support of members highlighted.

“On behalf of the club I’d like to thank all the committee for their hard work and effort in the last few years, often behind the scenes, which has resulted in this dream becoming a reality,” said Louise Doyle, Highview’s chairperson. “The club are also very grateful for the support and guidance from Cllr Peter Chap Cleere. This project will not only benefit the ever increasing club members but the community as a whole.”

Work is ongoing to help the club with fundraising efforts to complete the project. With construction set to come close to €500,000 all involved with Highview are determined to provide as high a finish as possible on their new pitch. Their efforts were boosted recently with the awarding of €150,000 in Sports Capital Funding, a grant the club described as a monumental achievement for all involved with the project.

However, more assistance is required to put the finishing touches on the new facility at Harristown. Committee and club members have appealed to the wider Graig community to get behind them as they press for the finish line.