Camogie- Laois have too many aces for Kilkenny Intermediates 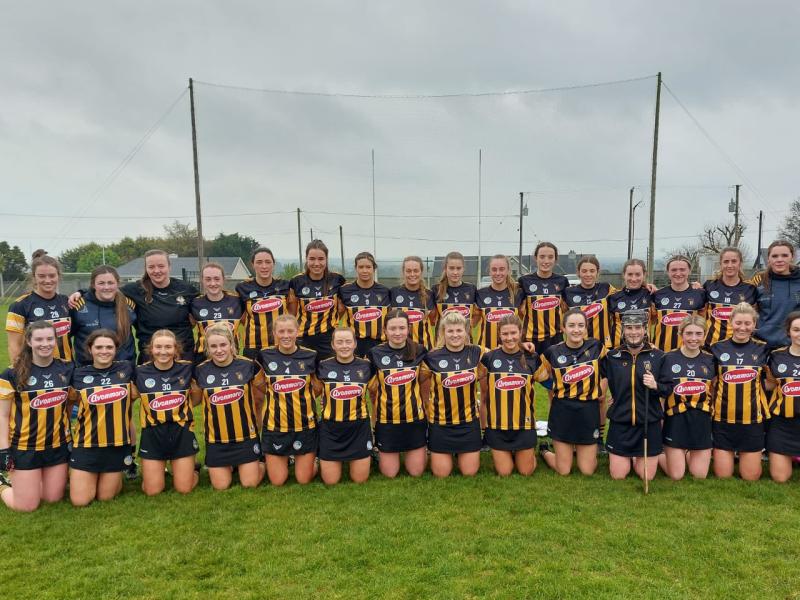 The Kilkenny intermediate team that lost out narrowly to Laois

Laois recorded a two point win over a disappointing Kilkenny side in the Leinster quarter final in Camross last Saturday.

A bit like the Senior game in Wexford this was a very poor affair and it was very low scoring.

Niamh Sweeney set up Hannah Scott for a point on 21 minutes.

A minute later saw Kilkenny breach the Laois defence after a super run by Niamh Phelan saw her give a pop pass to Sweeney who shot over the bar for a well-earned score.

Laois responded with a point of their own but the turning point of the first half arrived when Hannah Scott took a shot from 40 yards out, the ball dropped short to Shauna Treacy who was first to react as she put pressure on the Laois keeper and took a shot but the Laois defence held firm and cleared their lines.

The second half was slow to start with Amy Collier getting the first score with a pointed free for Laois.

Referee Alan Lagrue from Kildare and Kilkenny physio Michael Dunne were then involved in a discussion that saw the Kilkenny Physio receive a red card and he was sent from the field.

Kilkenny were then awarded a penalty when Hannah Scott was taken down inside the large square after a high tackle.
Hannah dusted herself off to take the penalty but it was mishit and the Laois goalie had an easy save.

Emma Manogue who was part of the Kilkenny winning minor team the week previous won herself a free which was converted to leave the score 0-7 to 0-5 in favour of Laois.

Amy Collier extended the lead with a point from a free, Tara Ronan was brought on as a Kilkenny substitute and got herself on the scoresheet very soon after to leave two points between the teams.

Aine Phelan converted a free to leave two between the teams heading into injury time but Amy Collier got another free after 31 minutes and that’s the way it finished, Laois 0-9, Kilkenny 0-7

The result was a disappointing one for Kilkenny and that concludes their Leinster championship, they now start the All Ireland series on May 28/29.