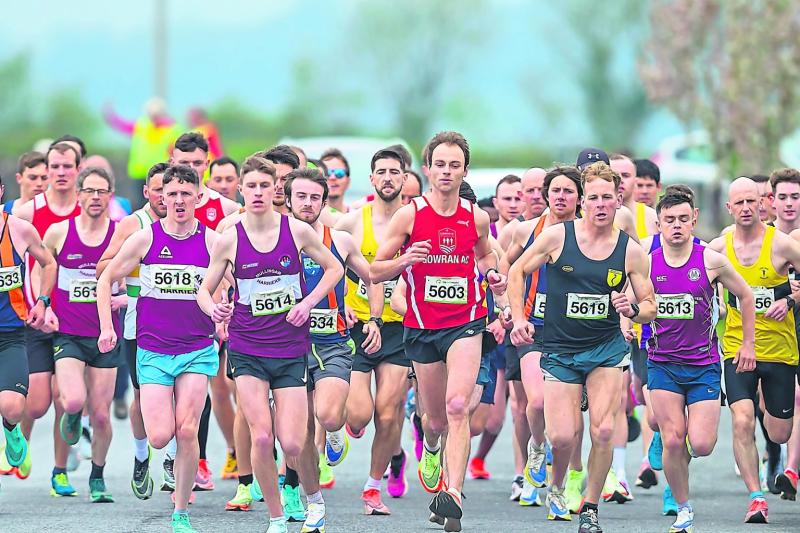 thletes race off from the start line at the Leinster Novice and Masters Road Championships, which were held in Gowran last weekend. Picture: Mark Desmond

Gowran rolled out the welcome mat as the Leinster Novice and Masters Road Championships returned to the racing calendar last Saturday.

Back after a Covid-enforced absence, the Kilkenny village was the venue for the women’s 3km and men’s 6km races. The traditional 1500m lap around the village of Gowran was lined with people, cheering on their teams.

The first race of the day was the Masters Women’s 3km. The race was won by Noreen Brouder of Sportsworld with her team mate Maria Jones in second place. Kilkenny had a county team which consisted of Joanne Quinn (St Senan’s), Edyta Lubowics (Thomastown) and Caroline Mullally (St Senan’s), Quinn finishing in fifth place. St Senan’s finished eighth in the club section.

There was some good news for St Senan’s athlete, Patsy Foskin, who was third in the over-60 category.

The masters men’s event attracted a large field, with 87 men aged over 35 lining up for the 6km event. All eyes were on Martin Hoare (Celbridge) - beside him on the start line was James Kelly of Castlecomer. In his first year as a masters, he was keen to impress.

Another man with impressive calibre was Alexander Wallace (St Coca’s), who ran 2:30 in Berlin six months ago. He followed this up with a 2.32 in Clonakilty in November. Niall Sheehan of the local Gowran club lined up too, the former Irish intermediate cross-country winner, now in the masters age group.

The four laps over the 1500m course saw athletes being dropped from the leading group. On lap four Martin Hoare was out in front some 100m clear of the group behind, which consisted of Alexander Wallace and Kilkennymen Kelly and Sheehan.

Kelly was working hard to close the gap, with Wallace beside him. Sheehan had a battle of his own, as Lea Fulcher was working hard to pull away. With just over 500m to go Wallace got the better of Kelly and left the Castlecomer man to be a clear third place finisher. Sheehan finished in fifth place. Within the age categories, James Kelly finished second over 35 with Niall Sheehan third. Kilkenny finished fourth in the county section, just one point off third place.

There was better news for the Novice men however, as the Kilkenny team secured bronze medals.

An annual event on the throwing calendar, the Templemore Throws is as big as any national championship. Javelin, discus, shot and hammer throwers from all over Ireland gather for this event.

Five athletes from Brow Rangers represented Kilkenny at the event. Athlete of the day was Doireann Haughney who took home three medals. She was first in the shot, second in the discus and third in the hammer. Young Meabh O’Donovan was third in the hammer. Thomas Shore produced a great final throw in the shot putt that put him into second place, with a new personal best (PB). Dylan Walsh also had a PB, this time in the hammer.

There was success for Eli Dunne as he claimed victory in the javelin and followed this up with a third place in the hammer. In total the five athletes took home seven medals.

Three Kilkenny athletes lined up for the Irish Milers Club meet in Santry - all three in the men’s Grade A 1,500m. All three secured PBs.

Meanwhile at the MTU meet in Cork, St Senan’s had two athletes in action. Gearoid Long produced a PB in the 3,000m race, while clubmate Ronan O’Donovan had a season’s best in the Men’s C 800m.

There were three big meetings in the US at the weekend - the Penn and Drake Relays and the Jordan Payton Meeting in Stanford, California.

Competing in the Jordan Payton meet were Peter Lynch and Aoibhe Richardson. Peter Lynch (KCH) had a great victory in the men’s 5,000m to get yet another PB over 5km this year. Finishing in a time of 13:48:52, Peter won race two. The A race was won by Emil Danielsson of Sweden in 13:24.

That fantastic time of 15:49:08 has not been broken for 37 years now. There have been some attempts to surpass this record since, a Kenyan team and a team from Nike Oregon among the most notable. Both came short.

Last weekend, four more Irishmen lined up at the Penn relays in Philadelphia in an attempt to break the world record. The Dublin Track Club team of Paul Robinson (St Coca’s), Andrew Coscorscan (Star of the Sea), Hiko Haso (DSD) and Sean Tobin (Clonmel) were answering the call from the On Athletic Club in the USA to launch a serious assault on the 37-year-old record.

Robinson anchored the team, led them through the first mile in 4.07 and handed over to Andrew Coscorcan, who ran a blistering mile in 3.55, then it was Hiko Haso.

At this stage On Athletic were ahead, but the world record pace had passed all teams, it was a matter of seeing who would come first and second. The On Athletic team had a slight advantage. Sean Tobin ran the final leg, but On Athletic were too far ahead to catch.

In the end it was second place for Paul Robinson and his Dublin Track Team in a time of 16: 10: 04 with On Athletic some six seconds ahead in 16:04:69. The world record survived yet another attempt.

Two members of that World Record winning team from 37 years ago were present on the night, Marcus O’Sullivan and Ray Flynn.