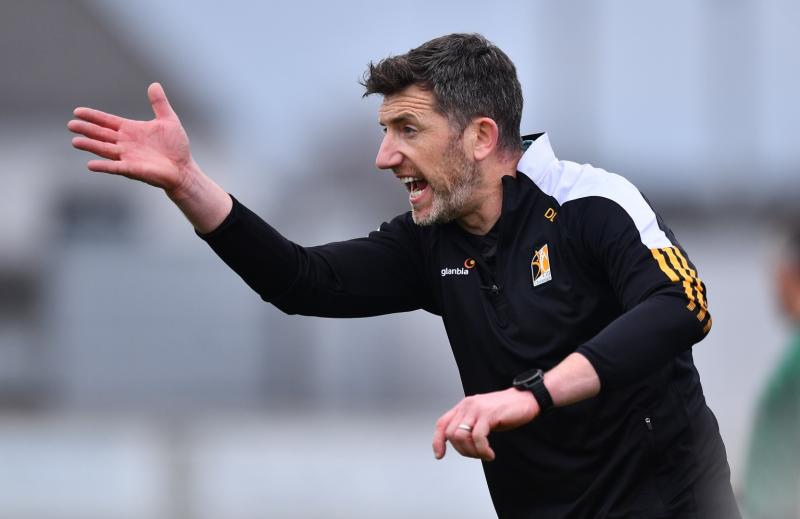 Kilkenny under-20 manager Derek Lyng during his side’s one point victory over Galway in Tullamore on Monday evening. Picture: Sportsfile

The scenes at the end of the Leinster semi-final victory over Galway were very un-Kilkenny like but that just showed you how much it meant for Derek Lyng’s side to get one over a Galway team that has dominated the Cats at underage level in recent years.

Be it minor or under-20, Galway have held a firm upper hand over Kilkenny so for the side in Black and Amber to win in such dramatic circumstances was most noteworthy.

“At different times it looked like we were dead and buried as we were four or five points down but we just kept fighting,” the Kilkenny boss said afterwards.

“I’m just delighted for the players as they have put in a huge effort and we have been working since last October.

“We knew Galway had huge talent as they had four All-Ireland minor winning teams so we knew we had to get everything right and go to the death.

“I’m just super proud of the effort and the way they continued to battle as well as using the ball well and they were very brave too.

“Maybe we got a bit of luck at the end but I think we possibly earned that,” he added. “You don’t mind the players making mistakes once they keep fighting and working and that’s all you can ask for.”

Kilkenny certainly rode their luck at stages of the extra-time victory and the Emeralds man cited Aidan Tallis’s two penalty saves as a big turning point.

“The two penalty saves were incredible and that’s the little bit of luck that we did get as we managed to keep the ball out,” he said.

“Had either of those shots gone in, maybe it would have been difficult to come back but we managed to get a bit of momentum and energy from it and the game swung from that point on as we managed to get up the field and knock over a few scores.

“We were never too far away in the game either and it’s just a credit to them that we kept battling.”

Next up is a Leinster final meeting with Wexford and Lyng knows what a big challenge that will be.

“Today is a great win but we’ve a quick turnaround to the final and we’ve nothing won yet, that’s the reality of it,” he added.

“We’ve beaten Galway but we still have to meet Wexford in a week’s time so that’s a whole new challenge and while I’m happy with our performance today, the next day will be a completely different game.”

Monday's final against Wexford takes place in Netwatch Cullen Park, Carlow and will throw-in at 7.30pm.