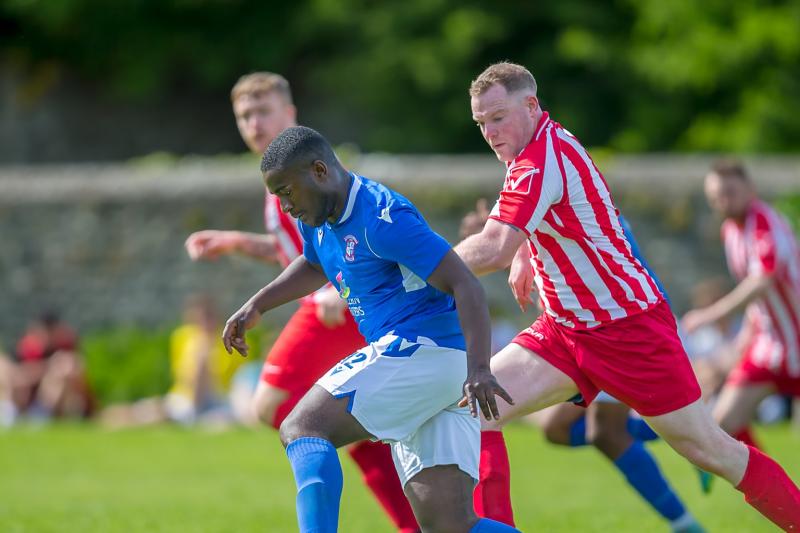 After wrapping up the St Canice’s Credit Union Premier Division league title, attention switched to national matters for Evergreen as they travelled to take on Dublin powerhouse Kilbarrack United in the Leinster Junior Cup semi-final on Saturday afternoon.

The Kilkenny City side travelled in confidence to the Greendale Road and they had reason to be cheer within 10 minutes of the start after Andrew Wall broke the deadlock.

Despite holding the advantage for over 20 minutes, Evergreen were soon rocked when Kilbarrack equalised on the half hour mark with Kayln Sweeney pouncing for the equaliser before Jack Kelly edged the Dublin side in front five minutes later.

In what proved to be a very exciting opening period, it was Kilbarrack who were celrbrating again before the half-time whistle when Sean Cummiskey slid in from close in to make it 3-1 as the hosts took a firm control of the game.

Two minutes after the restart Kilbarrack were awarded a penalty and Cummiskey kept his nerve to net a fourth goal for the winners.

Evergreen were left chasing shadows at this stage and they were soon 5-1 down when Jack Kelly doubled his tally for the afternoon.

Evergreen did manage to nab a consolation goal before the end with David Grincell heading in from a corner in the 87th minute.

The other last four tie saw Freebooter’s conquerers New Oak Boys of Carlow take on Wexford’s North End United and it was North End who came out on top at Hollygrove on a 2-1 scoreline in a game that went to extra-time.

The final between Kilbarrack and North End will be held at the Carlisle Grounds in Bray on Sunday, May 29.

The local action saw the McCalmont Cup take centre stage with Freebooters and St Canice’s meeting at the Waterbarracks in the final quarter-final tie.

In a well contested clash it was Freebooters who emerged 2-0 winners with Paddy Cahill and Zach Bay Hammond netting the goals.

It was a brave display by a St Canice’s team that only won the Eamonn Maher Coach Hire Division Two League a couple of days previous and their attention will now switch to action in the  Junior Division Two Ken & Michael Byrne Cup.

For Freebooters the reward is a derby day meeting with Evergreen in the semi-finals of the McCalmont Cup with Castlewarren Celtic and Thomastown United meeting in the other last four clash.

Both games will take place in Derdimus this Sunday with Castlewarren and Thomastown getting proceedings underway at 12 noon before Evergreen and Freebooters meet at 3.45pm.

The other games last weekend saw Deen Celtic and Freebooters perform on the double with Deen Celtic defeating Thomastown 2-1 before then drawing with Freebooters 2-2 in the Junior St Canice’s Credit Union Premier Division.

The other league clash saw Freebooters and Highview Athletic share the spoils.

Elsewhere there was victories for Ormonde Villa and Freebooters B over Stoneyford United and Evergreen C respectively in the Junior Division One Billy Leahy Memorial Cup while Castlewarren Celtic beat River Rangers on penalties in the Division Two Ken & Michael Byrne Cup.

The final two games of the weekend also went to penalties with Evergreen 46 and Tullaroan claiming wins in the Division Three Cup.