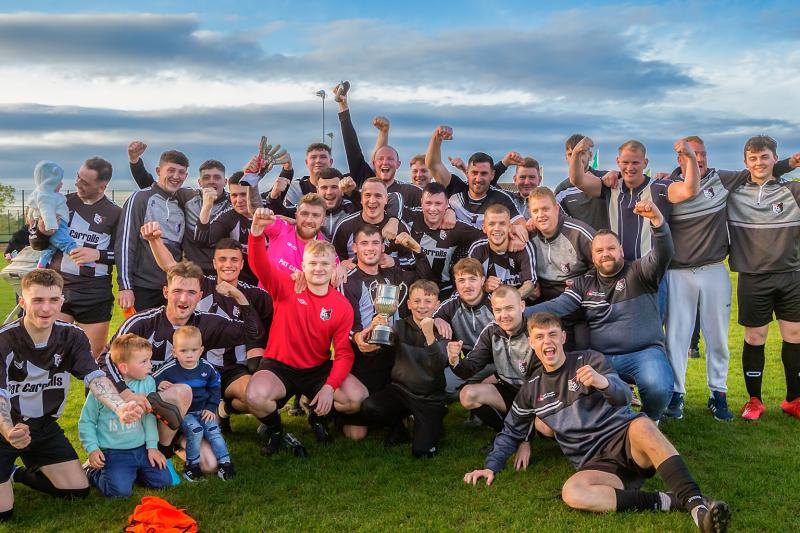 The Newpark B side that beat Tullaroan. Picture: Mark Desmond

As the domestic soccer season draws to a conclusion, it was a much quieter weekend of action in Kilkenny.

The only piece of silverware that was given out at the weekend was in Derdimus as Newpark B and Tullaroan met in the Junior Division Three Jim Maher Memorial Cup Final and they produced a decent game.

Saturday’s divisional decider saw Tullaroan take an early lead when Jason Dermody found the net but they couldn’t hold on to the advantage with the city side’s second string bouncing back with goals from Dylan Campion and Henry O’Neill sealing the title for Newpark.

After a difficult league season, the cup success was invaluable for Newpark against a Tullaroan team that were league champions.

There was two games in the Junior Mock Lawlor Premier Cup over the weekend with Thomastown United sealing their place in the final when defeating Clover United 3-0 at United Park.

It will be Thomastown’s second appearance in a cup final this season with the McCalmont Cup final against Evergreen taking place on Sunday (3pm, Derdimus)

Evergreen are also still involved in the Junior Mock Lawlor Premier Cup after they travelled to Graignamanagh last Friday night and saw off hosts Highview Athletic on a 5-2 scoreline.

The Kells Road outfit will now face Bridge United in the semi-final with a final place against Thomastown on offer.

There was also semi-final action in the Division One Billy Leahy Memorial Cup as Freebooters B and Fort Rangers booked a place in a final that takes place on Saturday evening.

Freebooters needed penalty kicks to see off Ormonde Villa in Garringreen while Fort Rangers were 2-0 winners over Callan United at Cuffesgrange.

The final bit of cup action in Kilkenny was in the Junior Division Two Ken & Michael Byrne Cup as Castlewarren Celtic claimed a penalty shootout victory over Freshford Town.

They will now await the winners of the Thomastown United B and St Canice’s semi-final clash which takes place this weekend. The Division Two Cup is a bit behind schedule as a result of St Canice’s extended run in the LFA O’Neills Junior Plate and it’s a competition they are very much still involved in after they qualified for the last 32 when defeating St Pat’s FC 3-1 at the Waterbarracks.

Owen McCormack, Harry Jordan and Mark Flynn got the goals for the Saints.

St Canice’s were crowned Junior Eamonn Maher Coach Hire Division Two League champions a couple of weeks ago as well and in the last action of the weekend, Lions AFC and River Rangers met to decide who got promoted to the Junior Intosport.ie Division One League after both sides finished in joint second position on the same number of points.

The sides met in a playoff in Derdimus and it was the Laois side who sealed their promotion as runners-up when they ran out convincing and dominant 4-0 winners over River Rangers.

All eyes will now turn to the McCalmont Cup Final that takes place on Sunday.