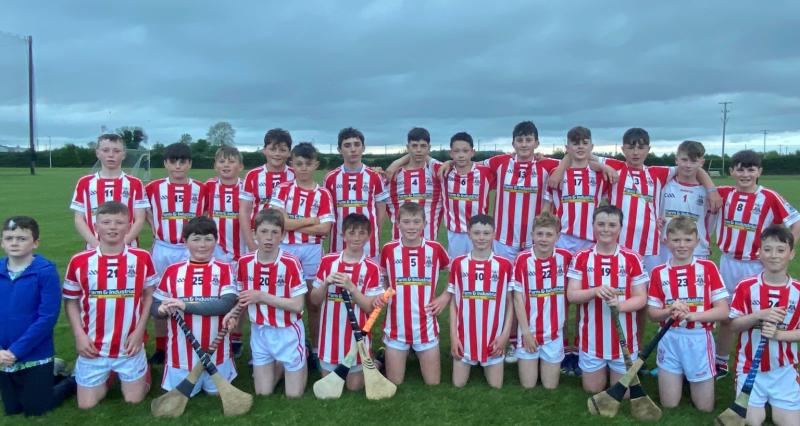 The warm still summer’s evening provided an ideal backdrop in what turned out to be a thrilling encounter.

Blacks & Whites having won the toss elected to play into the car park goal.

Emeralds opened the scoring with a lovely point in the second minute by Aaron Phelan.

Following some good team play which led to a point by Cillian Deegan, Aaron Phelan struck again having rattled the net and by the 4th minute Emeralds were leading 1-2 to 0-0.

Blacks & Whites got their first point from a placed ball expertly slotted over the black spot by centre forward, Ross Phelan.

Ross raised the white flag again with a magnificent point from some distance out three minutes later.

After 10 minutes without a score Jack Power pointed for the Emeralds and Blacks & Whites finished their first half with a point by Jack Duff in the 29th minute.

After the interval Blacks & Whites came out on fire and within seven minutes Ross Phelan had scored 1-2(f) leaving them two points clear.

Emeralds fought back and Dara Sweetman found the net having collected a pass from the ever-hardworking Aaron Phelan in the 41st minute.

Ross Phelan responded for Blacks & Whites displaying his expert marksmanship once again from placed balls by pointing two frees to leave the sides level by the 44th minute with Emeralds 2-3 to Blacks & Whites 1-6.

What followed was a brilliant display of skill by both sides, the Emeralds eventually making a breakthrough with a Philip Campion goal followed by points from Cillian Deegan and Darragh Cleere.

Ross Phelan pointed for Blacks & Whites and both teams battled it out until John Guinan blew the final whistle on a very entertaining game by two well matched teams.

The Emeralds finished with four points to spare over their rivals with the final score being 3-5 to 1-7.

Young Irelands Under 13 boys who their fourth match in the Duggan Steel Under 13- Roinn A Hurling League on Tuesday May 17 against Piltown in Gowran.

Gowran were quick to put their mark on the scoreboard with a point from a free from Conor Carroll to open the game and a quick flick of a ball into the net by Daniel O Neill put Gowran in the lead 1-1 to 0-0 in the opening minutes.

Piltown were quick to react with a point by Daire O Brien and a ground strike from Ben Claffey couldn’t be stopped by Young Irelands goalie Dylan Brennan.

Piltown came out on top in the third quarter and with less than 15 minutes on the clock, they led by eight points Piltown 2-9, Young Irelands 1-4.

The Young Ireland boys fought hard and showed great determination and skill to win by a point.

Best in the backs for Piltown were Shane Downey, Sean Driscoll and Tom Gahan. The Under 13 Young Ireland boys will play against Danesfort next week.