Fort Rangers round off season with league and cup double 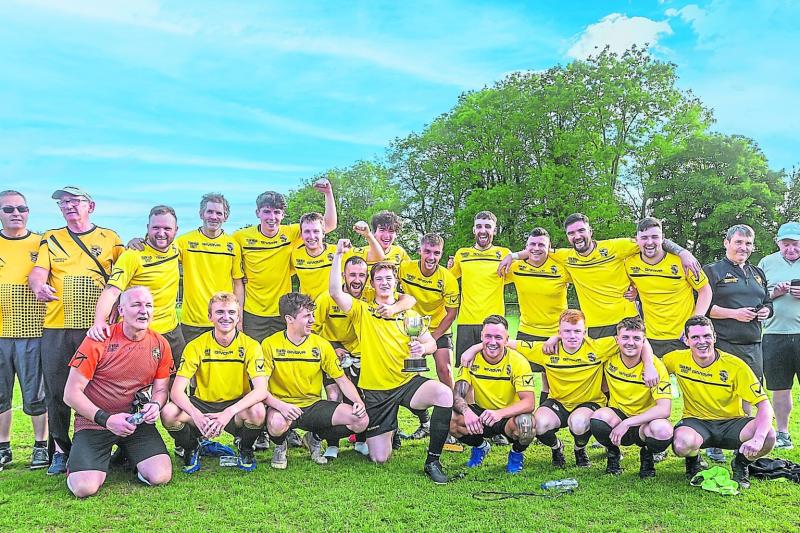 Fort Rangers put the icing on the cake of their best ever season when they beat Freebooters B 4-0 to clinch the Division One Billy Leahy Cup in Derdimus on Saturday.

Having sealed the league title three weeks ago, this was an opportunity to complete a league and cup double for the first time in the club’s history.

Fort were up for the challenge in a big way and they had one hand on the cup after 15 minutes when they raced into a 3-0 lead.

When Jim Nugent jnr made it 4-0 after 25 minutes the destination of the silverware looked secure.

It was a game management situation after that, a task that Fort Rangers completed in style.

The result marked the end of a magnificent campaign for Fort, who can look forward to competing in the Premier Division of the Kilkenny & District League next season.

The final defeat ended a disappointing season for Freebooters B after they earlier finished in third spot in the Junior Intosport.ie Division 1 League.

he city side who already claimed top honours in the Junior Eamonn Maher Coach Hire Division 2 League were always in control as they cruised to a 5-0 victory.

Dylan Clifford, Mickey Clifford, Owen McCormack and Mark Flynn all got on the scoresheet for the winners as they set up a final showdown with Castlewarren Celtic in Derdimus on Thursday night.

The only remaining silverware for the domestic season to be given out is in the Junior Mock Lawlor Premier Cup where Evergreen and Bridge United meet in the semi-final of the competition in Goresbridge on Thursday.

Thomastown United await the winners as they look to make up for defeat in the McCalmont Cup Final while Evergreen will be aiming to make it three trophies in Kilkenny provided they overcome Bridge United with the final fixed for Saturday evening.