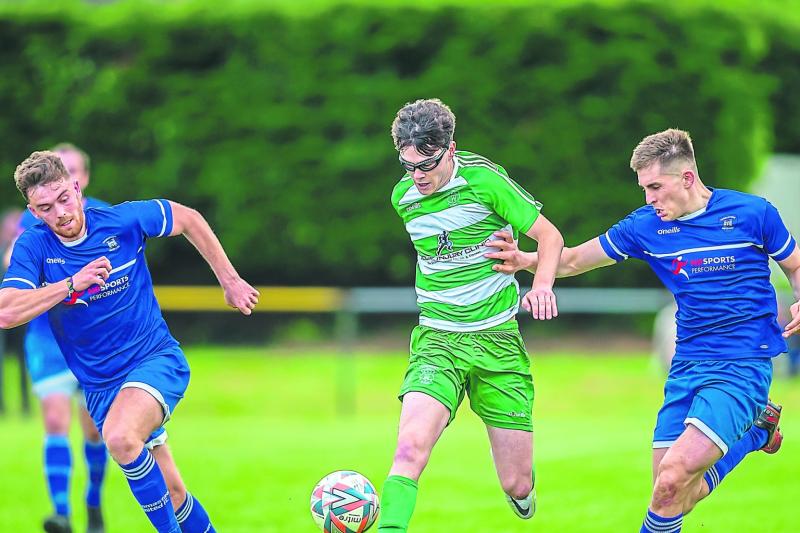 Evergreen wrapped up a fifth McCalmont Cup title on the trot as they saw off Thomastown United at Derdimus on Sunday afternoon.

Thomastown started brightly but a three goal spell in five first half minutes effectively settled the result in the Kilkenny city sides favour.

Mikey Drennan, Mark Slater and Ben Hickey were all on the scoresheet between the 31st and 36th minutes which left Thomastown chasing shadows for the rest of the game.

The Junior St Canice’s Credit Union Premier Division champions then made it a four goal advantage when second half substitute David Grincell scored inside the final ten minutes.

Grincell's goal arrived from a Mark Slater corner as the five in a row winners displayed their superiority over Thomastown.

Incidentally Thomastown were the last side outside of Evergreen to claim victory in the marquee cup competition but no matter how hard they tried, they were very much second best on the day.

The game was back in it’s traditional end of season date after the covid pandemic enforced a July date for last year’s decider which saw Evergreen overcome fellow city side Newpark 1-0 after Mikey Drennan converted a penalty in a closely fought contest.

That final was the first in over two years after local soccer in Kilkenny took a backseat during the pandemic.

Evergreen were very impressive in their route to the final as they defeated 2021 finalists Newpark 6-0 in Round 1 before then having a 4-0 victory over Bridge United.

Deen Celtic were then the opposition in the Quarter-Finals but again Evergreen were much too strong as they went goal crazy in an 8-0 win.

It was a local derby in the Semi-Final and despite going behind against Freebooters, Evergreen showed plenty of fight and character to claim a 3-1 win.

On the other side Thomastown kicked off their campaign with a 3-0 win away to Spa United in Jim Maher Park back in March before they then saw off Evergreen’s third side but not without getting the fright of their lives on the Kells road.

Thomastown defeated Fort Rangers on a 3-2 scoreline in the Quarter-Finals before running out 1-0 winners over Castlewarren Celtic in the last four.

It’s fair to say Thomastown’s route wasn’t as notable as their opponents with kickoff approaching.

The opening stages of the 2022 decider saw both sides feel each other out tactically before Evergreen created a couple of chances.

The first opportunity arrived in the 3rd minute when Mickey Thomas latched onto a corner and he headed narrowly wide of the Thomastown goal.

Key attacker Declan McQuillan then took on an opportunistic attempt from distance but his left footed effort sailed wide.

Thomastown had a solid opening which was needed after they conceded nine goals to Evergreen earlier in the league season and the United Park side’s first bit of goalmouth activity occurred when John McCarthy launched a half volley towards Philly Johnson’s goal.

The Thomastown midfielder’s effort may have been inventive but it missed the target.

Thomastown were growing in confidence though and they were pressing Evergreen hard which helped in seeing Casper Konepka race clear put his close bound attempt was well saved by Johnson in what was the first big chance of the game.

Thomastown continued to cause issues for the cup holders when Robert Skehan got away a volley inside the Evergreen box that just missed the target.

While far from being at their best Evergreen then pounced to open the scoring when Mikey Drennan latched onto a knock down from Niall Andrews on the back of a long throw into the box.

Thomastown had to then go chasing the game and it was to their detriment as another set piece rocked them a couple of minutes later with Mark Slater doubling the advantage.

Thomastown could barely gain breath by the time a third goal went in as Ben Hickey gave Thomastown a mountain to climb when his 36th minute effort pushed Evergreen 3-0 clear by the sound of the half-time whistle.

The whole tempo of the game changed in the second half and once Evergreen survived the third quarter rally from Thomastown, the cup would be their’s and that’s how things transpired.

Sub David Grincell added a fourth Evergreen goal in the 83rd minute as the city side rounded off the win in style.