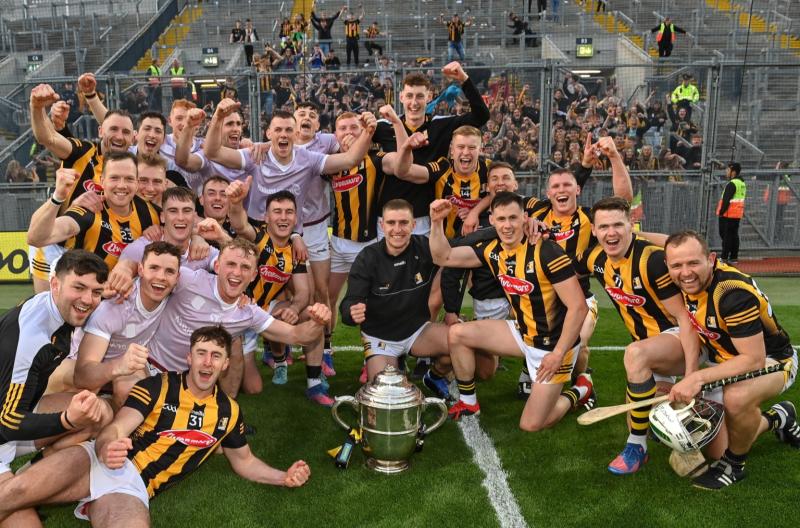 The Kilkenny team celebrate after the Leinster GAA Hurling Senior Championship Final match between Galway and Kilkenny at Croke Park in Dublin. Photo by Ramsey Cardy/Sportsfile

Kilkenny captured their their third Leinster title on the trot after a defiant display saw them emerge five point winners over Galway in Croke Park.

The Cats were much improved from the recent defeat to Wexford in a victory that was backboned on a defensive unit that shut out a talented Galway attack.

Mikey Butler was awarded the official man of the match and along with Paddy Deegan and the returning Huw Lawlor, the Cats succeeded in frustrating their opponents.

Eoin Cody was left scoreless from play for the second successive game and his clubmate TJ Reid was also held from open play but the ace free taker still finished with 0-12.

It was a very stop start game and Kilkenny led early on when points from Adrian Mullen, Paddy Deegan and TJ Reid gave Brian Cody's side a 0-4 to 0-1 buffer on the scoreboard.

Galway stayed in touch with a number of Conor Cooney frees and they also created a number of goal opportunities but Kilkenny stood tall to keep Eoin Murphy's clean sheet intact.

With the aid of the wind in the opening half Kilkenny went into the break with an 0-11 to 0-9 lead but it was still all to play for heading into the second half.

The second half was all about TJ Reid's accuracy from frees as apart from Adrian Mullen's third effort from play in the 38th minute, it was the only point from open field on the Kilkenny side until second half stoppage time.

Galway's indiscipline proved to be their downfall and although Conor Whelan scored four points from play including two expertly taken scores in the opening period, the forward threat wasn't enough to overturn the Cats.

Like Reid, the majority of Galway's second half points came from Conor Cooney frees with Cianan Fahy and Fintan Burke also finding the target.

Kilkenny slowly but surely edged out their lead and the gap was five points by the 65th minute and even though Galway got the deficit back to three, the Cats always had the edge with Mullen and Padraig Walsh putting the seal on the victory late on.

It was a typical backs to the wall Kilkenny performance and they can now look forward to an All-Ireland semi-final in four weeks time.