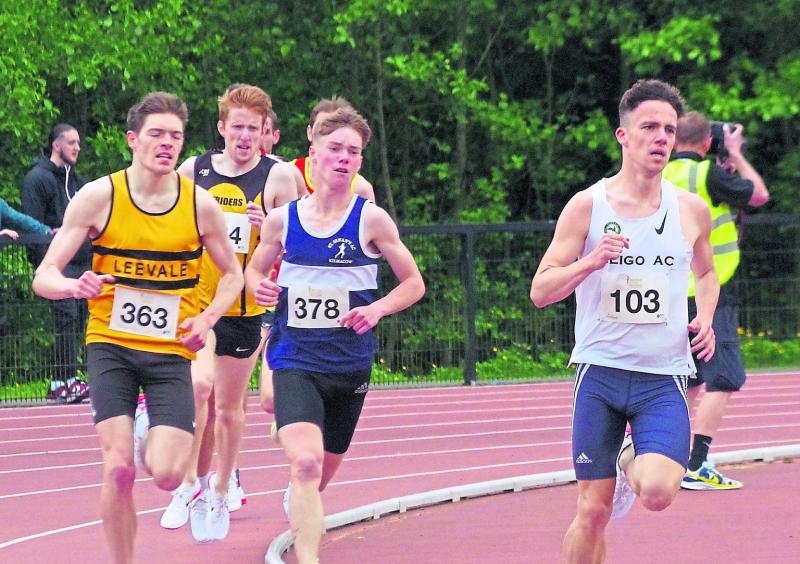 David Williams (St Senan’s) had a great performance at the Belfast International, setting the European qualifying standard for the under-18 1,500m

It was another sensational weekend of athletics as athletes of all ages battled for honours and times in local and international events.

From Belfast to Belgium, the USA to France and closer to home with events in Carlow and Kilkenny, there was enough athletics news to keep supporters busy keeping up with results.

Aoibhe Richardson was part of an eight-strong Irish team that jetted off to France to take part in the 10,000m European Cup.

No stranger to this event, Aoibhe competed in this event last year when it was held in London. 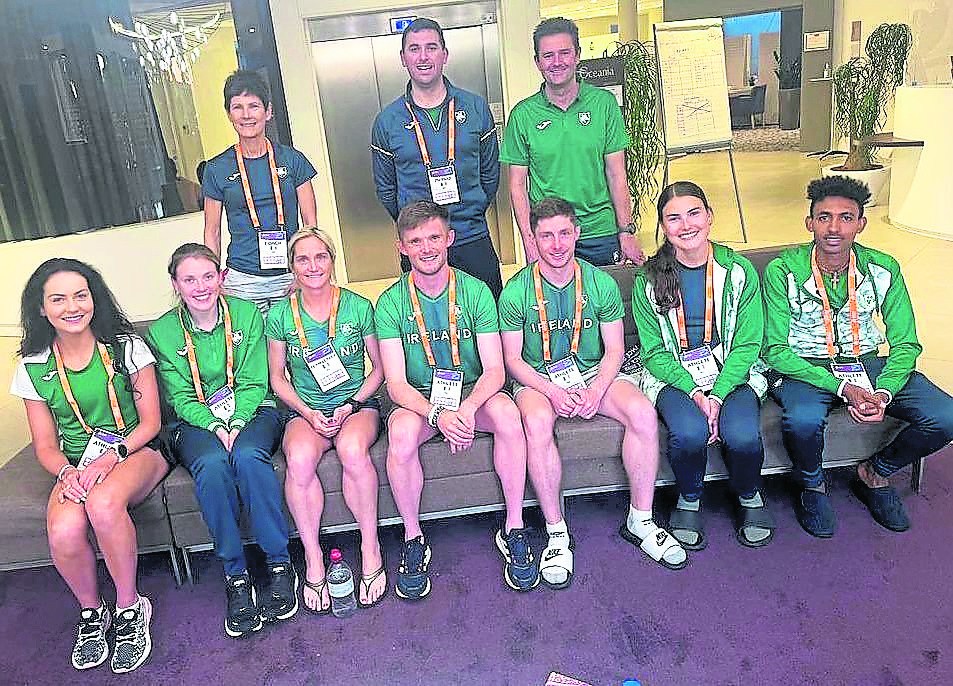 Aoibhe Richardson and the Irish team

While Richardson’s preparation was meticulous as usual, the after-effects of Covid reared their head. The Kilkenny City Harriers (KCH) athlete had not recovered as well as she thought she had, which hampered her performance. As the weeks pass her results will come back to their usual high standard.

Representing Ireland in the Women’s A Race, Ann-Marie McGlynn (Letterkenny AC), Aoibhe Richardson and Emma Mitchell (Clonliffe Harriers) took to the start line. From the start team Ireland’s women were part of a hotly contested race, with position battles and a fast pace being set by the pack leaders.

First to cross the finish line in 25th position on behalf of Team Ireland was Letterkenny AC’s Ann-Marie McGlynn, setting a seasonal best time of 33.31.73 for her third appearance at the 10,000m Cup.

Coming closely behind McGlynn was Richardson who crossed the line in 28th place with 34:22.31 on the clock, outside her personal best time of 32:56.52.

Meanwhile up in Belfast, David Williams gained a last minute entry into the Belfast International in the 1,500m.

The 17-year-old Kilmacow runner was racing in the senior race and chased hard. Finishing in eighth place he achieved the European under-18 1,500m qualifying standard when he ran a superb 3.56. As there are more than two athletes now qualified for this event, he will have to wait until the end of June, when the team is selected, to see if he will be boarding that plane to Jerusalem.

Williams has been running well this year, setting a personal best (PB) in every race he has done - so far he has knocked nine seconds off his 1,500m PB since January.

Eoin Everard competed at the IFAM meeting in Belgium at the weekend. This action -packed meeting saw over 100 Irish club athletes compete, with events starting at 9am and running right through to close to midnight.

Everard took to the line for the 5,000m. With over 74 athletes divided into three races, the KCH man finished 16th in the largest field of the three races - Race B. His time of 14.00 placed him ahead of emerging athletes such as Keelin Kilrehill and Abdul Laadjel and Leinster Novice winner Pierre Murchan.

The Leinster senior, junior and masters championships were held in sunny Carlow on Saturday and Sunday with some great performances from Kilkenny athletes.

This year’s event was held a little earlier than normal and squeezed between the Schools Championship races as well as a host of other races. The provincial championships are a great breeding ground for athletes who wish to pass into the senior ranks, offering them an appropriate level of competition that prepares them for the bigger challenges. 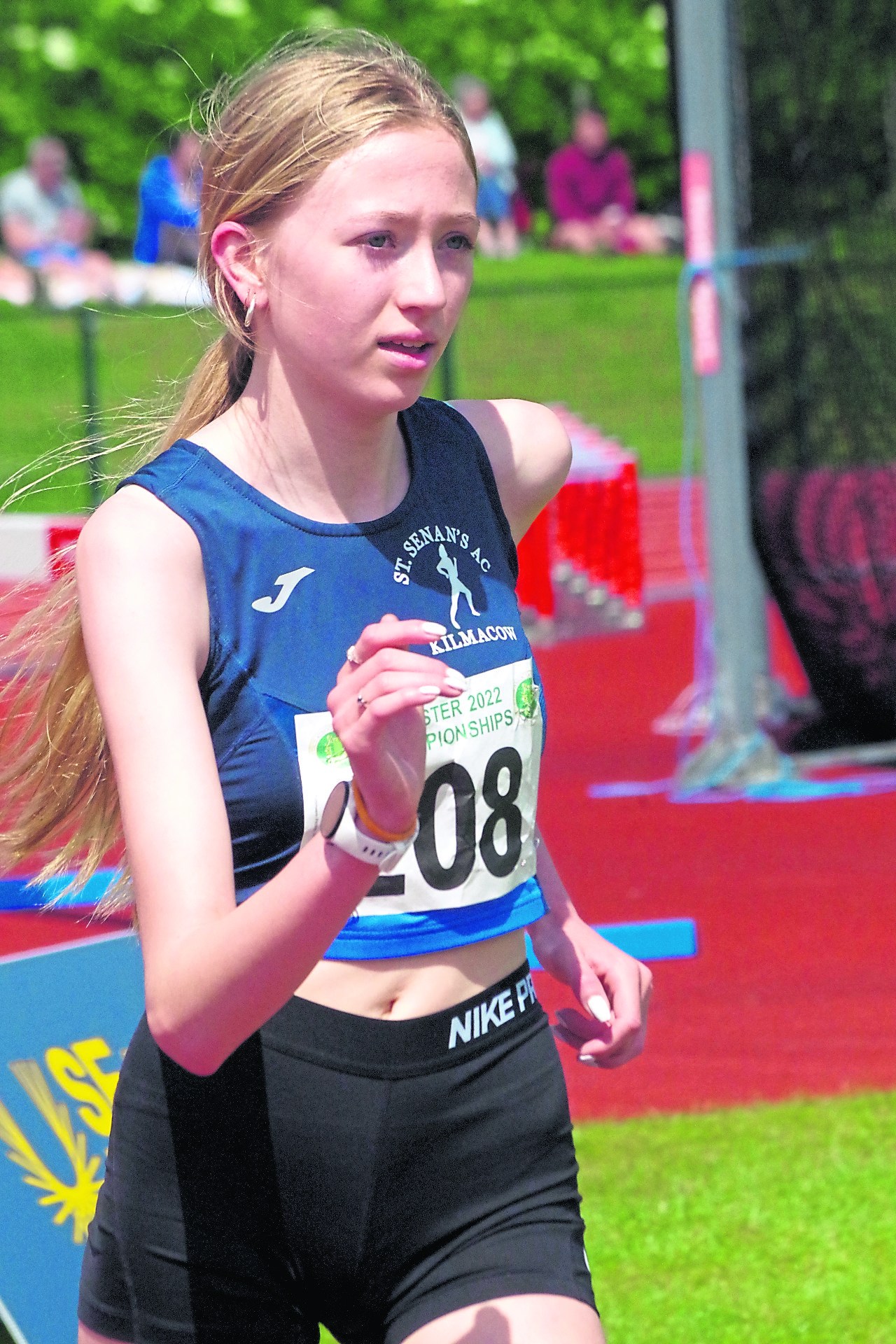 Keelin Duggan (St Senan’s) had a great win in the junior women’s walk. The 16-year-old Kilmacow athlete was competing in her first junior championship. Kilkenny had a one-two in the women’s 800m as Hannah Kehoe (Thomastown) won the senior 800m event from Sophie Jackman (St Senan’s).

In the junior men’s 800m there was a great battle for the top three places between four athletes, with Cilliam Dunne (Gowran) claiming third and 16-year-old Eoin Aylward (St Senan’s), racing in his first junior competition, finishing fourth. Aylward then went on to finish second in the junior triple jump with a new personal best.

Jordan Knight (St Joseph’s) is having a superb return to form with his long jump performances returning to their former glory days. Having taken time out to concentrate on the 400m over the last few years, Knight showed his jumping skills are still intact as he leaped to 6.63, a new personal best.

In the 400m he finished second, marginally outside of his PB, which he will hope to eclipse before the season is through.

The St Joseph’s AC super siblings Verena Fenlon and Austin Lee cleaned up with medals over the two-day Leinster competition.

Between them, the pair took home seven gold and three silver medals - an impressive haul!

Competing in the over-50s category, Fenlon claimed gold in the shot, weight for distance and hammer with silver in the javelin and discus. The retired Garda was in flying form as she powered her way through all the events.

A gifted juvenile athlete in her day, it is great to see her continue her athletics through her senior and into her masters days.

St Joseph’s AC can only benefit from her expertise and experience.

Verena’s brother Lee competed in the over-35 category. He took home gold in the weight for distance, discus, hammer and javelin, adding a silver in the shot-put. He was only beaten by 1cm in the shot.

Another family who dominated the throwing events was the Kelly family, who flew the flag for Brow Rangers. Murty Kelly, competing in the masters over-70, left Carlow with two gold and two silver medals. Kelly has been competing for about six decades and, in his heyday, was an Irish International athlete. At the weekend he took home gold in the hammer and discus and silver in the weight for distance and shot.

It was a Kilkenny one-two in the junior men’s steeplechase as Billy Coogan (Gowran) stormed around the track to win in a time of 6.11. He finished ahead of St Senan’s AC athlete Gearoid Long, who was trying the event for the first time.

Coogan, who is aiming for the European under-18 standard, is now just five seconds adrift of the mark. He will hope to make another attempt at reaching the standard in mid-June.

The final stages of the county juvenile track and field championships were held last week with the team events for the under-8s to under-10s held on Wednesday and all ages on Friday. This marks the end of what has been a five staged championship event for juveniles.

After the final stage on Friday, Kilkenny City Harriers were crowned the overall winners of the Track and Field Shield. Gowran were second with St Senan’s in third place.

For many juveniles this will mark the end of their track and field individual competitive season. Others will progress to the Leinster Championships, the outcome of which will dictate their further competitions.

For those who did not win medals in the counties in specific events, the county B championships will be held in a few weeks’ time. It has been a busy season so far for everyone but one that has been thoroughly enjoyable. The Leinster relays will be held on June 12 in Leixlip. No doubt, there will be several teams representing the county.