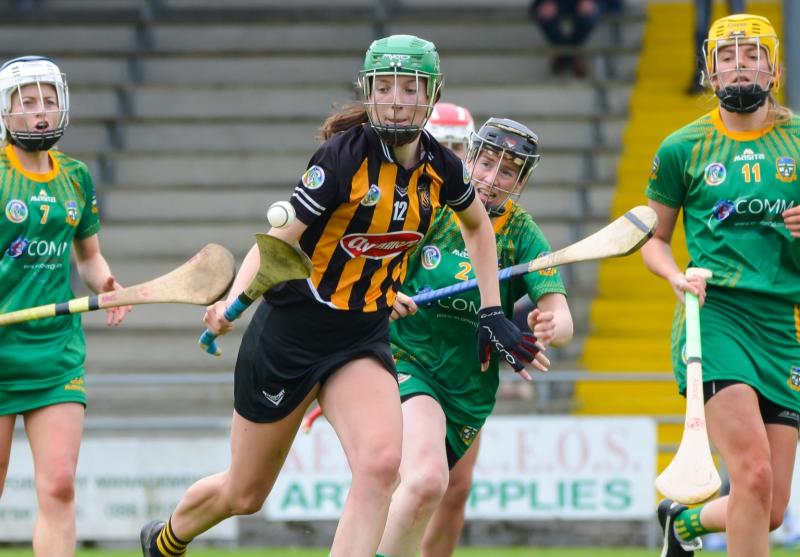 Kilkenny fell to their first defeat in the Glen Dimplex Intermediate Camogie Championship when going down to Cork in a wet Pairc Ui Rinn on Saturday evening.

The Cats came into the game on the back of an impressive opening round victory over Kildare but unlike against the Lilywhites this was a much stiffer challenge.

John Scott’s team were trailing for the majority of the contest and although Hannah Scott found the net with a second half goal, it wasn’t enough as the Rebels wrapped up their second win of the championship.

Continuous heavy rain made conditions hard for both sides with the slippery surface making for a lot of unforced errors but credit the players who worked hard all through.

Kilkenny played with just two in their inside line and with both defences enjoying numerical advantage, scores were hard to come by.

The game was nine minutes old before Ciara O’Keeffe set up Aoife Cantwell to point the opener.

Thirteen minutes in Joanne Casey converted a Cork 45. She added a second point from play to give Cork the lead. Michelle Murphy and Emma Manogue swapped points but Cork finished the half the stronger with points from Cliona O’Callaghan and Casey to lead 0-5 to 0-2 at the break.

Kilkenny went with three in their inside line for the second half and from the restart they came at Cork, Emma Manogue won a free and converted but crucially Cork got the next three scores with Casey, Hayley Ryan and Rachel Harty pointing.

Kilkenny had a glimmer of hope when they grabbed a fortuitous goal as Hannah Scott dispossessed Cork keeper Stefanie Beausang to finish to the net to cut the Cork lead to two.

Trevor Coleman’s side upped their work-rate in response with five points without reply to stretch their advantage to seven points with 10 minutes remaining and from there to the full-time whistle there was only going to be one winner.

Emma Manogue and Aine Phelan added late Kilkenny points before Cork substitute Lauren Homan scored one on a day when Cork were full value for their victory 0-14 to 1-5 victory.

Kilkenny will have to lick their wounds quickly as they return to action at home to Derry on Saturday afternoon in Freshford.