Kilkenny Intermediate's hang on for crucial victory over Derry 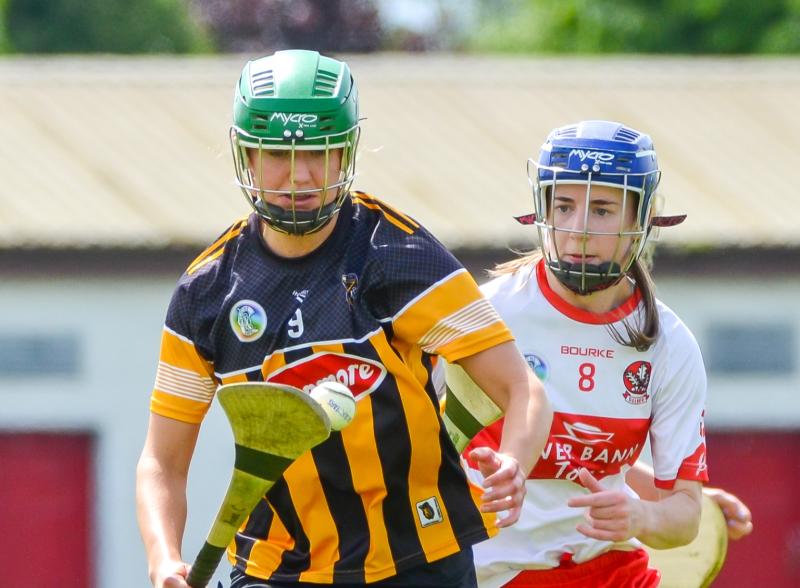 First half goals from Laura Hegarty and Ciara O'Keeffe set up Kilkenny for a narrow victory over Derry in the Glen Dimplex Intermediate Camogie Championship in Freshford on Saturday afternoon.

It was the Cats second win in three games and although they led by nine points at half-time they were left hanging on come the end of the game with Aine Phelan knocking over a late insurance score and they had to be thankful for goalkeeper Sinead Farrell producing a number of crucial saves.

That Phelan point was Kilkenny's only score in the second half as Derry got 1-5 without reply including an Aine McAllister goal that got the Oak Leaf County back within a point of John Scott's team.

Derry came into the game in buoyant mood after defeating Kildare and Meath in their opening two games and they continued that momentum with Mairead McNicholl and Aine McAllister knocking over early points for the visitors.

Kilkenny then got their game in order when a Laura Hegarty sideline cut went all the way into the Derry goal in the 5th minute after the sliotar flew past Niamh Gribben.

There was a quick Derry response when Sinead Mellon levelled up matters but despite the bright opening, Mellon's effort was the Ulster side's last point of the half.

Kilkenny duly scored 1-6 on the trot over the following 20 minutes with Hegarty and Hannah Scott edging the home side two points clear before Ciara O'Keeffe goaled in the 14th minute on the back of good build up play from Emma Manogue and Shauna Treacy.

Kilkenny then rounded off the half with points from Manogue, O'Keeffe and Aisling Curtis as they raced ahead on the scoreboard.

Derry almost had a goal just before the break when a shot rebounded off the crossbar but as a result of the miss, Kilkenny led 2-6 to 0-3 at half-time.

Kilkenny had the aid of a strong breeze at their backs in that opening half and as a result it was a backs to the wall effort in the final 30 minutes.

Aine McAllister and Mairead McNicholl reduced the deficit to seven points within minutes of the restart before Derry then created a number of goal opportunities.

Sinead Farrell was very busy in the Kilkenny goal as Derry went chasing a way back into the game and the goalkeeper denied her opponents on a number of occasions including thwarting Mairead McNicholl from a penalty.

Mairead's namesake Grainne then got up from centre back when she found the target from distance and when Aine McAllister added her third point of the game, there was only five points between the teams heading into the final 10 minutes.

Farrell then saved Kilkenny again when denying a close in Aoife Shaw effort before Sinead Mellon pointed to extend the Derry tally.

The Kilkenny defensive rearguard was eventually breached when Aine McAllister goaled in the 57th minute to make it a one point game.

Derry then had chances to level up the game but Kilkenny managed to survive the onslaught with Aine Phelan converting a late free as the side in black and amber ran out 2-7 to 1-8 winners.