Athletics- Kilkenny focus will be fixed on France this weekend 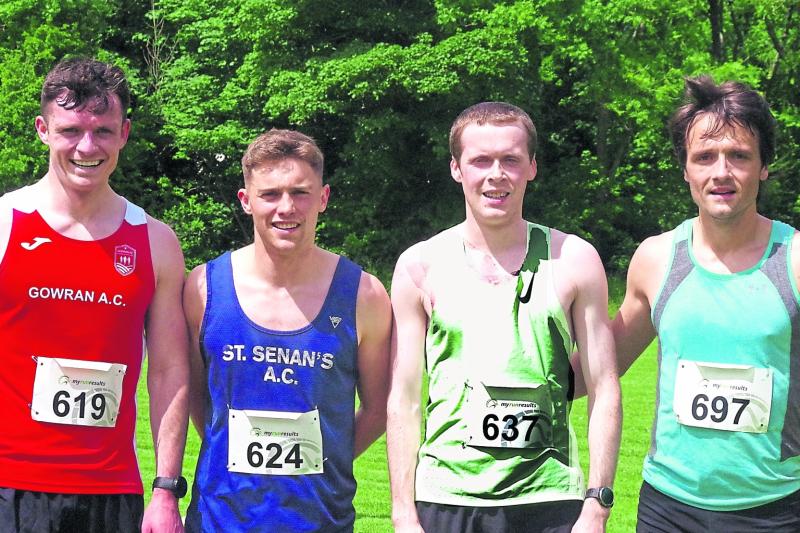 It has been another trans-European adventure for Irish athletes this past week, with meets being held in Holland, Slovakia, Switzerland, Sweden, Norway and Italy.

Kildare AC athlete John Fitzsimons raced the PTS meet in Samorin, Slovakia. In a good quality field he finished in third place in a time of 1.46.64.

At the same meet there was more good Irish news. Limerick athlete, Sarah Lavin finished second in the 100m hurdles in a new personal best (PB) of 12.94 while Chris O’Donnell (Galway) won the 400m in 46.44.

Meanwhile in Geneva Israel Olatunde ran yet another 100m PB.

Rome was the venue for the prestigious Diamond League meet with Ireland’s Ciara Mageean being the only representative. Ciara Mageean finished fourth and posted a season’s best time in the 1500m with a time of four minutes 5.44 seconds in a tactical race won by Ethiopia’s Hirut Meshesha.

With plenty more races across Europe and American in the coming days and lots of Irish names to follow, two Kilkenny athletes can be added to that list.

David Williams (St Senan’s) and Billy Coogan (Gowran) have been selected as part of the Irish under-18 team to race in Francoville, 20km outside of Paris this Sunday. To be included in the Irish team for the 10 nations international, athletes must have achieved the European under-18 qualifying standard or be reasonably close to achieving it. The race in France marks the final day for achieving qualification standards.

David Williams has already achieved the qualifying mark in the 1,500m with his 3.56 being clocked in Belfast a few weeks ago. However, such is the depth of Irish athletes in this age group that he is now one of four athletes now with this standard. He must now ensure that he is faster than the other three athletes to guarantee selection.

This is quite a unique situation. Any other year, there would be no more than two with that standard. Coogan, on the other hand, is six seconds adrift of the 2km steeplechase standard and is hoping that on this final day he can work back those six seconds and achieve the standard.

With no other athlete as close to the qualifying mark, should Coogan surpass the 6.06 required, he is guaranteed a place on the team. 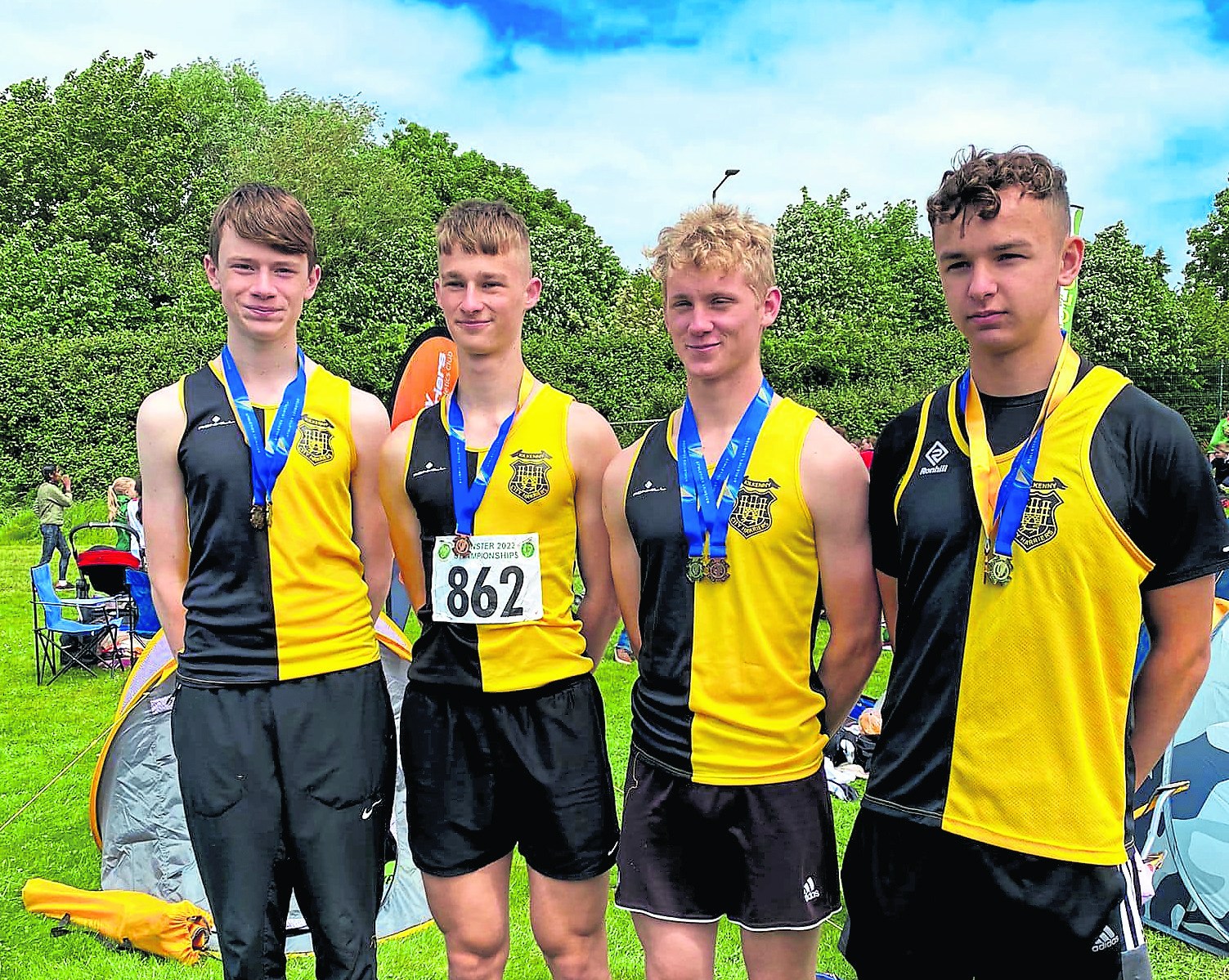 Kilkenny City Harriers were winners of the Leinster under-17 relay

Kilkenny City Harries (KCH) were among the top three clubs at the Leinster Relays in Leixlip on Sunday.

With a grand haul of 13 sets of medals, they were only eclipsed by Meath’s Ratoath.

The girls’ under-14 team of Kate Maher, Emma Hogan, Martha Bergin and Ellen Daly were impressive as they cruised to victory over the much fancied Crookstown-Millview team.

The boys’ under-14 team of Matais Quaglia, Joshua Malone, Paul Millea and Tiernan O’Brien had a great victory with Quaglia running a very impressive leg to give the team an advantage over Newbridge AC. It was this advantage that took them to the line in first place.

Thomastown produced gold in the girls’ under-9 4x100m. This team has also qualified for the under-9 pairs in multiple events.

It is going to be a busy July day for them as all events are being held on the same day.

The only other relay medal winners of the day were the Gowran. They secured a silver in the boys’ under-11 event.

With a last-minute switch from Kilkenny to Carlow, athletes had a little further than expected to travel for the Leinster Combined Events on Saturday.

In total the county had three gold in the pentathlon, one gold in the under-13 tri and a masters gold. Five gold medals is a great result for the county in these events.

For the multi-events, athletes score using internationally devised tables based on distances, heights and times. Winning an individual event along is not enough; the athlete much reach further to record their fastest time, the longest distance or highest height.

At the end of all the allocated events, points are totalled, and the winners is the athletes with the highest points total.

Rachel Duff (Gowran) won two of her three events, the long jump and the 200m - and took the title easily from Adrianne Hycrze of Naas.

The girls’ under-15 pentathlon was won by Ailbhe Steger (Gowran). She won the long jump and high jump and was second in the hurdles and shot and third in the 800m. 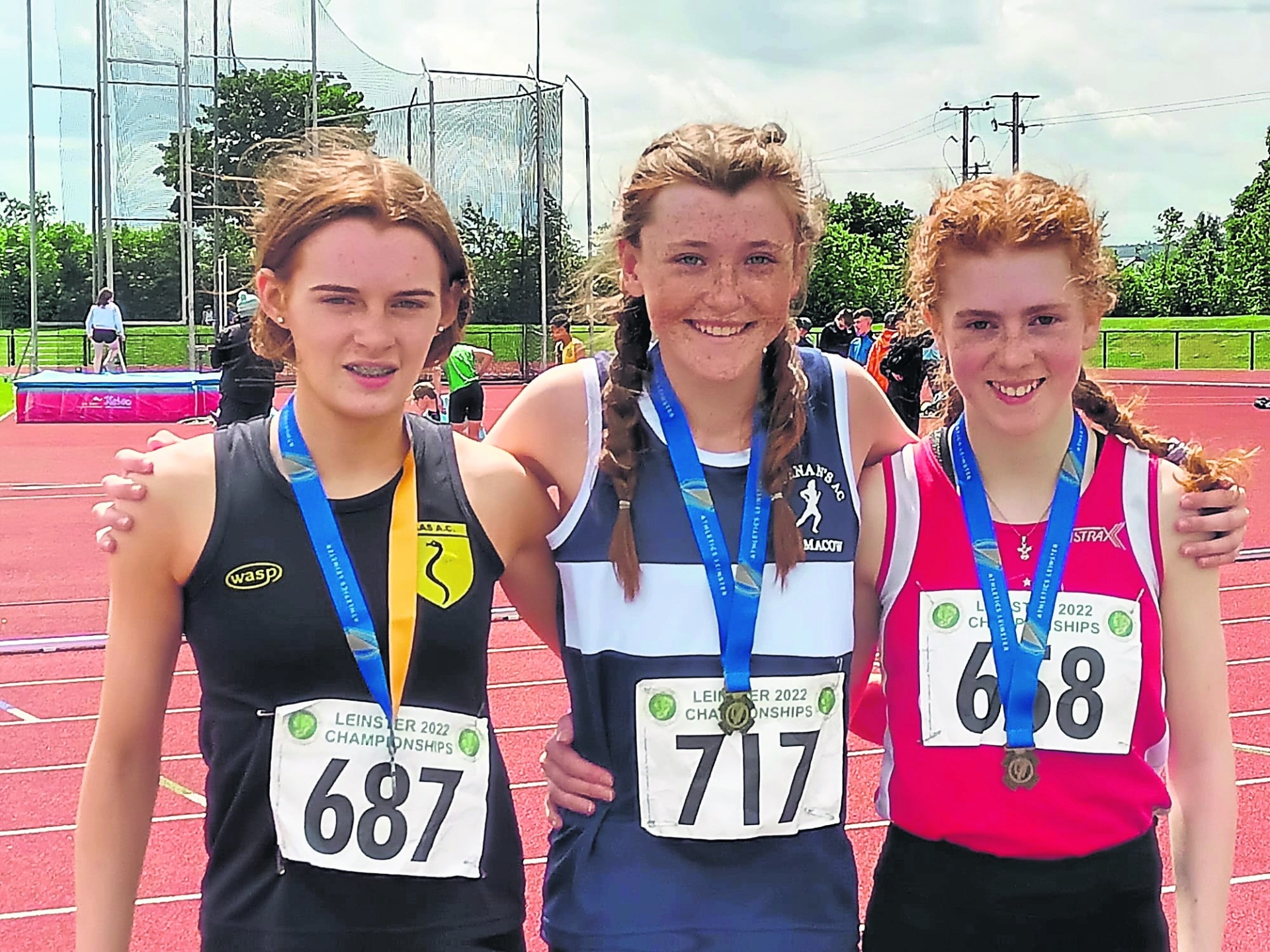 Eve Dunphy (St Senan’s) was the winner of the girls’ under-16 pentathlon. She won the 800m, high jump and shot and was runner up in the hurdles and long jump. It was Dunphy’s 800m that determined her ultimate victory. Hazel Coogan (Gowran) was third.

Thomas Carroll (Gowran) was third in the same event.

In the boys’ under-16 event Barrow Harriers got their first Leinster Combined Events medal when Jack Connolly was third.

This run traverses the beautiful South Kilkenny countryside at the foot of the Walsh Mountains with the peaks of Tory Hill and Moolum visible right throughout the run.

The event as usual was well organised, though with multiple other events being held on the same day, it did not attract the usual national figures.

Ray Lahart of Gowran was the outright winner of the Little South Run. He also won the County Novice.

Throughout the four-mile race it was a group of three athletes that were in contention for the top spot.

In the women’s race St Senan’s made a clean sweep. The winner of the county novice was Joanne Quinn (St Senan’s), with Siobhan Barron and Valerie O’Callaghan second and third respectively. St Senan’s A won the team prize with St Senan’s B in second place.

The next county road event (10km) will be hosted by St Joseph’s AC at the Pink Rock on July 17. Entry details will be posted soon.

The final stage of the county championships was held in Scanlon Park on Friday. Day six saw seniors, juniors and masters compete over their remaining events. 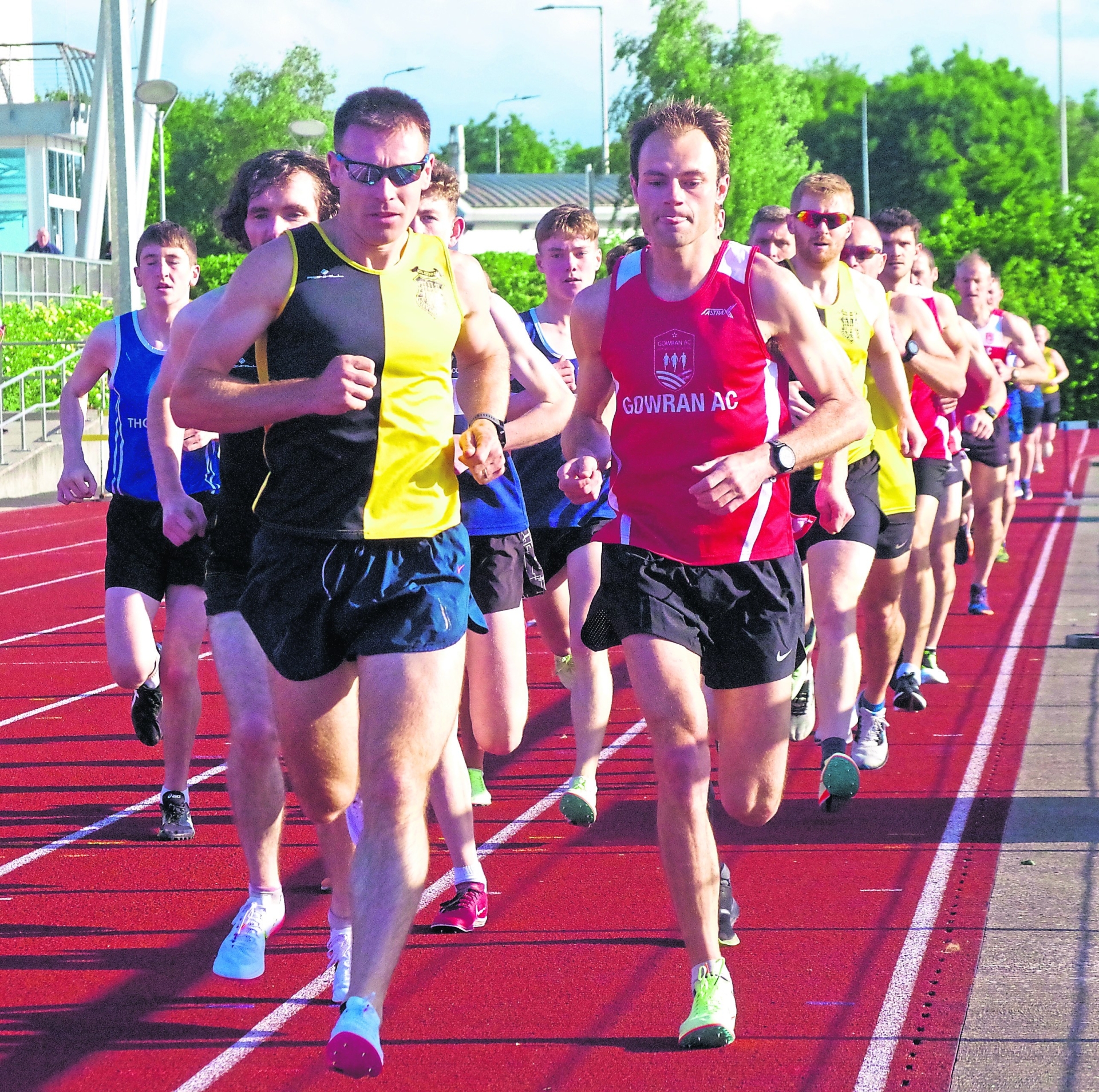 As usual the 3,000m was the most competitive race on the night with over 30 athletes on the starting line. The winner was James Ledingham (KCH), with Dean Rowe (Gowran) second.

In the women’s race Caoimhe Phelan (St Senan’s) was an impressive winner of the junior 3,000m while Verena Fenlon (St Joseph’s) took the shot-put and weight for distance titles. The St Senan’s masters women won a plethora of medals across multiple events, making this a successful day at the races for them.

With numbers low in all events except the 3000m, the questions need to be asked about the structuring of the county championships and how to make the programme more attractive for the competitive athletes to take part.

This year unfortunately, with the late start of the championships saw a clash with many other high-class track and field competitions, including the National League and Belfast Irish Milers event – both of which attract the county’s most competitive athletes.

One winner of note in Friday’s competition was John Lennon. At age 70, John won the men’s race-walking event. This marks a huge achievement for John - perhaps it is one of the record books.

Winning his first title back in 1969 in Thomastown, John was just 17. Competing in the blue of Thomastown, he beat Willie O’Keeffe (Thomastown) and John Mackey (St Joseph’s).

Since then, John has had the distinction of winning at least one county senior race-walking title in each decade.

Last Friday marked the seventh decade in which John has claimed a county title. While both Willie O’Keeffe and John Mackey went on to beat Lennon the following year and the following year again, they both eventually retired while John remained competitive. In fact, John went on to race Willie’s son Michael and after that his own son Mark Lennon. If he keeps going, he might yet race his grandchildren!

John won the national 20km road championships in 1984. This was his first national title, by far his proudest moment. He also medalled on the track in 3km, 10km and 20km and on the road in 20km, 35km and 50km.

His technique never quivering, reminiscent of what it was back in his heyday.