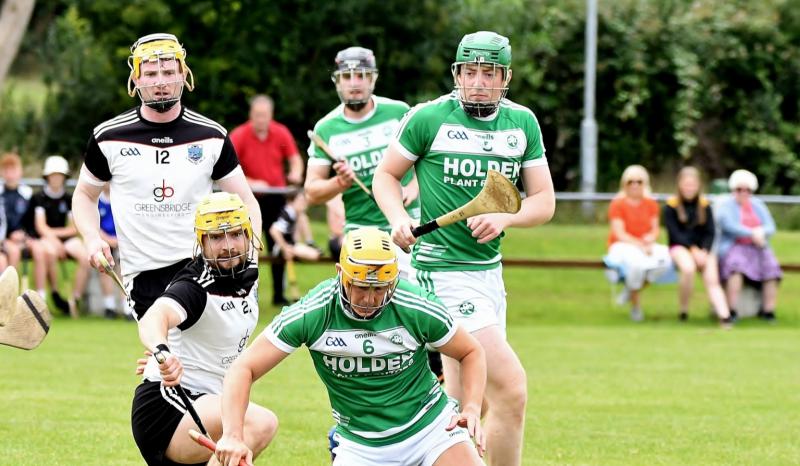 With an individual tally of 1-13 — same as Mullinavat's overall total — Eoin Cody led the way with a five star performance as Shamrocks were always in control against their near neighbours who suffered a heavy defeat for the second consecutive week.

The opening quarter was competitive with the Shamrocks men leading by 0-8 to 0-5 with the twice Young Hurler of The Year accounting for 0-4 (including a ‘65 and a free) while Niall Shortall, Mark Gorman, Adrian Mullen and the returning Richie Reid were also on target during that opening quarter.

For Mullinavat, Conor Walsh (2), Adam Mansfield, John Walsh (free) and Mikey Jones were on target throughout the opening quarter while further points from a John Walsh free and Adam Mansfield concluded theirfirst half total.

Shamrocks added further points in the second quarter from Eoin Cody (0-3 0-2 frees), Darragh Corcoran(2) & the excellent Liam Barron as they led 0-14 to 0-7 at the interval.

An Eoin Cody goal within seconds of the restart effectively sealed the contest as they now led by 10 points (1-14 to 0-7) before Liam Barron added two points to stretch the advantage further, 1-16 to 0-7.

A Conor Walsh point from play in the 34th minute got Mullinavat on the board for the second half before Shamrocks replied with points from an Eoin Cody(free) and Adrian Mullen in the 36th and 39th minutes respectively, 1-18 to 0-8.

A brilliantly well worked move was finished off by Robin Davis in the 40th minute(1-18 to 1-8) before Shamrocks replied once again with four unanswered points between the 42nd and 48th minutes from Eoin Cody(0-2 0-1 free), Adrian Mullen and Niall Shortall as they now led by 14 points, 1-22 to 1-8.

Mullinavat kept the scoreboard ticking over with four unanswered points of their own from John Walsh(0-3 0-1 free) and Padraic Gahan but Shamrocks outscored their opponents 0-4 to 0-1 over the closing minutes with the highlight been a brilliantly struck sideline effort by Eoin Cody.

Overall, a very impressive display from the champions who were again without the services of TJ Reid.

Further disappointment for Mullinavat following their nine point defeat to Lisdowney in Round 1 but no one can fault the efforts of Conor & John Walsh, Adam Mansfield, Tom Aylward and Padraic Gahan.

However, they will have their work cut out in Round 3 next Sunday afternoon against in form Tullaroan.