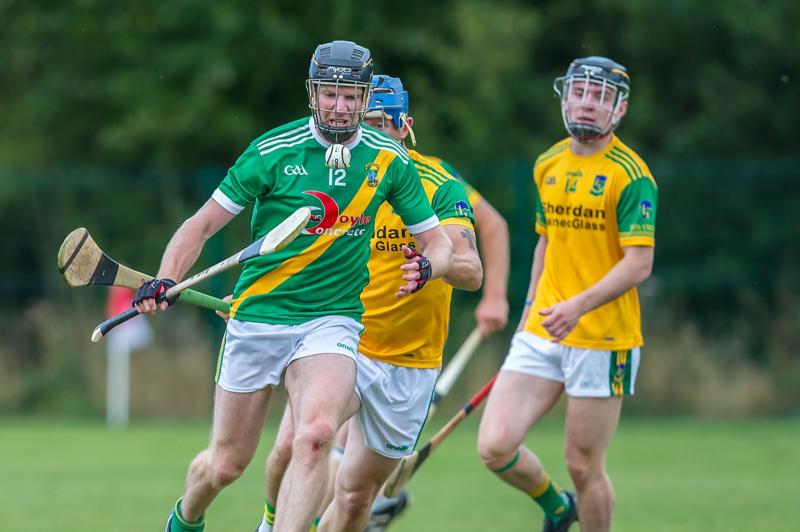 Coming into round four of the league in a group of four teams tied at the top, both Carrickshock and Dunnamaggin were hoping to strengthen their case for an automatic championship quarter-final spot.

And after two wins each combined with a heavy loss to the early championship favourites Thomastown, the form book predicted a close encounter between the near neighbours in Windgap.

Dunnamaggin got off to the dream start. JJ Dunphy got his hand to a long delivery almost straight from the throw-in. He stood up strong and finished to the net.

The next ball looked to have gone wide but was somehow retrieved and when the Carrickshock backs forgivably missed the lift in the dusty goalmouth, a goal was on again but somehow Carrickshock survived.

Their forwards quickly settled in to the game and within five minutes had snuffed out the goal, then Eoghan O’Neill scored a fine point from play to put them in front.

For the next 10 minutes scores were evenly traded, the highlights being a couple of long range efforts from Dunnamaggin’s Andy Hickey and Andrew Fitzpatrick.

Then two quick goals gave the Shocks a cushion that they maintained for the remainder of the game.

Eoghan O’Neill looked dangerous throughout and when the first sight of goal presented itself, he made no mistake.

Two minutes later a long ball to the Dunnamaggin square wasn’t dealt with and Jake O’Dwyer was at hand to pounce on the breaking ball.

Shortly after O’Dwyer produced a sweet strike from a sideline cut to give Carrickshock a lead of 2-9 to 1-7.

What looked to be a handy lead turned into a near unassailable one in the last few minutes of the half. Kevin Farrell rose highest to fetch a long ball, turned beautifully to create space and his strike gave the goalie no chance.

Just before the half-time whistle another long ball found that man Jake O’Dwyer prowling again. His goal stretched the Carrickshock lead to eleven, 4-10 to 1-8.

The first quarter of the second half was probably Dunnamaggin’s best spell.

Eoghan Kearney was punishing any Carrickshock indiscretion with his free taking and when he created space to fire over two quick points midway through the half it was back to a six point game.

But then Darragh Brennan, a thorn in the side of the Dunna defence all day, really started to hurt them.

He sent over a great point from a tight angle and a minute later was hauled down in the square as he was about to pull the trigger.

Given the form Jake O’Dwyer was in, he was never going to miss the penalty.

A few minutes later a well-worked move finished with substitute Luke Gaule sending a peach of a hand pass to Eoghan O’Neill and he finished straight off the hurl to re-establish their big lead, 6-17 to 1-17.

Apart from their early flurry, the Dunnamaggin forward line never really threatened goal and so they were never going to claw this one back, it finished 6-18 to 1-20.

The result leaves Carrickshock needing a win in the last round to go straight to the quarter-final, while Dunnamaggin’s fate lies in the balance – a win could get them to a quarter-final too, while defeat could send them to a first round relegation semi-final.