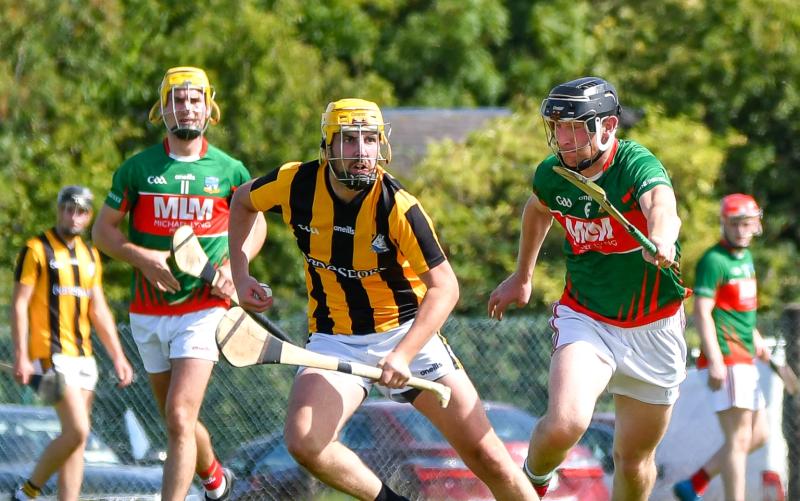 The Rower-Inistioge and Danesfort met in a top of the table clash in the Michael Lyng Motors Intermediate League in Gowran on Saturday.

The first half was nip and tuck but a goal on the stroke of half time saw Danesfort lead 3-11 to 1-11 at the break.

Danesfort were eight points up after 39 minutes and cruising when they went down to 14 men.

To Rower-Inistioge’s credit, they were back level at the end of normal time but were undone by a point in injury time.

Rower-Inistioge opened brightly and when Ruadhri Delaney picked out Jim Ryan, he fired over inside the opening minute.

Danesfort’s response was immediate and devastating, Philly Cooney collected a ball and finished low to the net.

Rower Inistioge steadied the ship by landing the next two points through Pat Lyng and Eoin O’Brien, 0-3 to 1-0 after two minutes.

Robbie Walsh (D) and a Richie Leahy free (RI) traded scores before Philly Cooney added to his earlier goal with a point and Robbie Walsh picked off his second point to nudge Danesfort two in front.

The lead was short lived when Tom Murphy (RI) caught a high ball on the edge of the square and rifled low to the corner of the net.

Danesfort netted for the second time when Jack Bruton made the most of an advantage being played to find Colm Phelan and he made no mistake.

Richie Leahy shot over his fourth point when converting a free from inside his own 65, after a foul on Eoin Doyle and the deficit was down to one.

Danesfort landed three unanswered points between the 24th and 27th minutes, through Ben Whitty and a pair of Richie Hogan frees to extend their lead to four.

Richie Leahy got Rower Inistioge’s last point of the half from a placed ball.

It looked like a goal would separate the teams at the break until Paddy Hogan’s huge puck out found its way to Colm Phelan and he kicked the sliotar to the net for his second goal of the half.

Rower Inistioge made a fast start to the second half with a pair of Richie Leahy frees eating into the deficit inside the opening two minutes (3-11 to 1-13).

When Danesfort ’keeper, Paddy Hogan stood up to hit a free from inside his own 45, no-one could have foreseen what transpired.

His free evaded everyone in the defence before taking a wicked bounce on the firm ground into the roof of the net. Suddenly the ’Fort men were eight points in front (4-12 to 1-13) after 36 minutes.

Just when Danesfort looked to be cruising, their captain Des Dunne was given his marching orders in the 39th minute, after picking up two yellows in the space of two minutes.

Jack Walsh (RI) got onto a break and rifled a shot from 18 yards at the Danesfort goal which Paddy Hogan saved, but Michael Galavan was on hand to flick the rebound to the net and with seven minutes left, Danesfort’s lead was down to two, 4-13 to 2-17.

Richie Hogan showed his class when he settled Danesfort nerves with a brilliant point from 70 yards and he looked to have sealed the game when he pointed a free after a foul on Jack Bruton to extend the Danesfort lead to four with five minutes to play.

Richie Leahy, who was having a magnificent game at centre forward, pointed a free after he was fouled.

Tom Doyle (RI) quickly followed up with a huge point from 75 yards. When Richie Leahy sent over his 13th point of the game from a placed ball in the 60th minute, the sides were level.

Credit to Danesfort who were on the ropes, Robbie Walsh had the composure to find Jack Bruton and he pointed from 45 yards to send the Danesfort support into delirium and maintain their 100% record on a scoreline of 2-21 to 4-16.