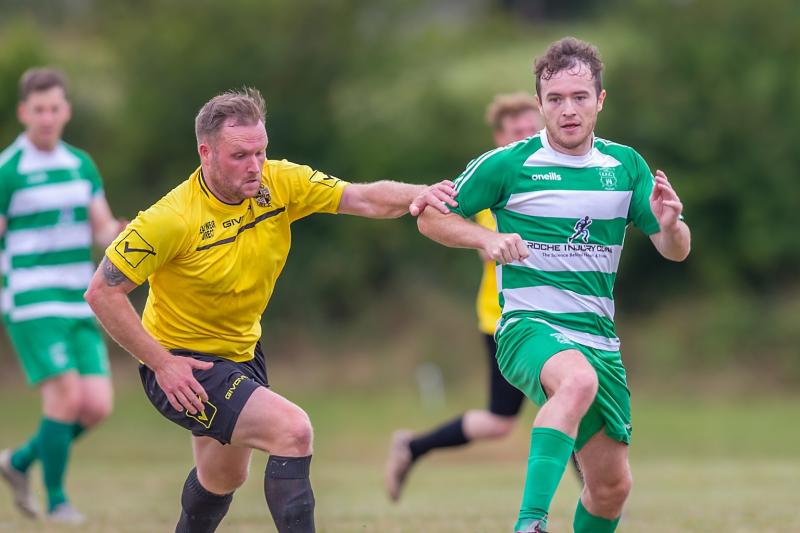 The domestic league season in Kilkenny returned last weekend where there were three games down for decision in the Premier Division and one game in Division One.

Defending Premier Division champions Evergreen opened up the defence of their title with the short trip to Cuffesgrange to take on Fort Rangers last Sunday morning.

All eyes were on Evergreen to see how they would kick off their season and as predicted Evergreen claimed the points when running out 3-1 winners.

Fort Rangers got off to a great start when they were awarded a penalty after two minutes which was duly dispatched by Dion Fitzpatrick.

Evergreen soon equalised but the Fort defence played superbly to hold out to the break and it took the visitors another 25 minutes in the second half before they went in front.

Fort rallied and were unlucky not to claw one back.

Despite a series of great saves by Fort’s keeper Eoin Maher, the Kells Road side bagged the three points when they netted their third goal in the final minute.

Elsewhere Freebooters travelled to Goresbridge and ran out emphatic 6-0 winners away to Bridge United.

Joe Banville, David Rice, Andy Walsh (2), Cian Dunne and Eoin Hanney all got on the scoresheet in a dominant opening day display for the city side.

The final scoreline was pretty harsh on Bridge as they only trailed 2-0 at the break and Freebooters scored three of their goals inside the final ten minutes.

The final Premier Division clash saw newboys Callan United play host to Thomastown United and it proved to be a very tight affair with the visitors eventually running out 2-1 winners.

First half goals from Adam Power and Podge Kirwan set Thomastown on their way and although Callan got one back at the beginning of the second half, they were unable to find an equaliser.

There was also a game in Division One where St Canice’s met Evergreen B at the Kells Road and ran out 3-2 winners.

St Canice’s won all before them during the 2021/2022 league season so it was no surprise to see them pick up maximum points when they stepped up a level on Sunday.

Goals from Mickey Clifford, Mark Flynn and Oisin Corr helped St Canice’s pick up the win and they will have comforts this weekend when entertaining Deen Celtic.

Prior to the league action last weekend, there were also a number cup games in the Pat Maher Shield last Wednesday evening.

The standout tie saw Thomastown and Freebooters clash with the city side emerging as 3-0 winners with goals from Harry Jordan, Joe Banville and Andy Walsh.

Bridge United, River Rangers and Tullaroan also secured their places in the next round with respective wins.

Tullaroan were most impressive in scoring for fun during a 5-0 win against Spa United.

River Rangers also kept a clean sheet when having a 3-0 success over Freshford Town while Bridge United won 3-1 away to Fort Rangers.