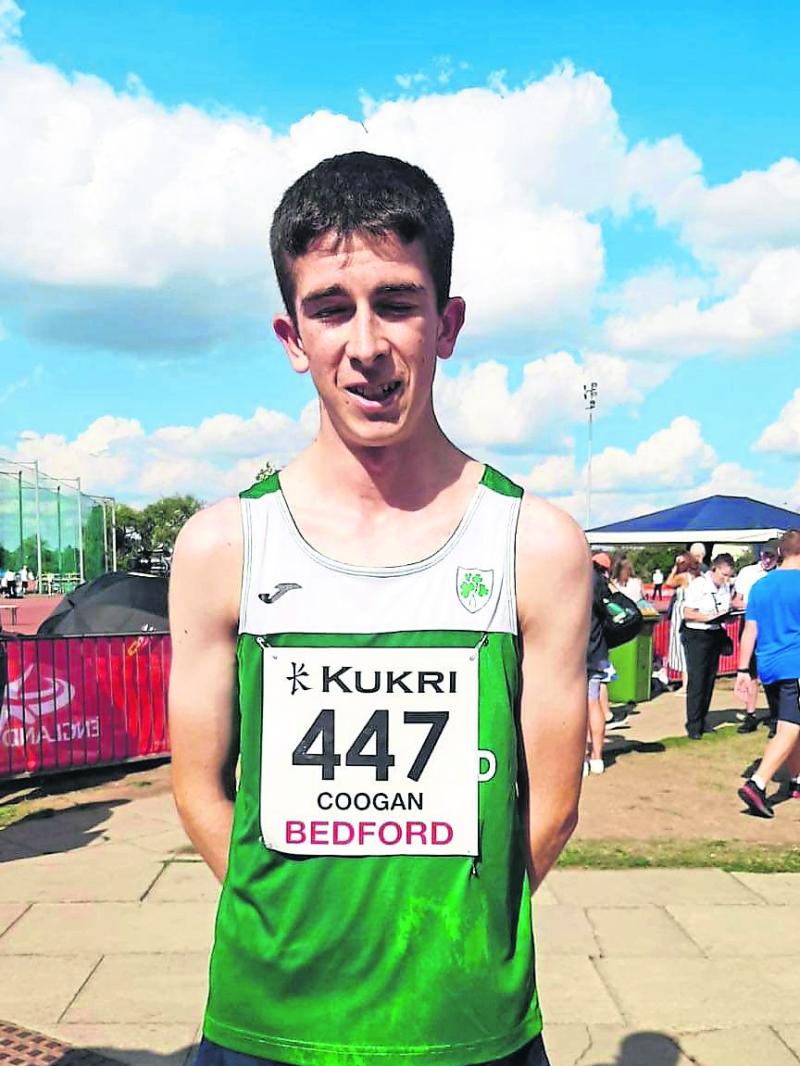 It’s 6.30am at Dublin Port. The morning air is warm, but fresh, and the sun has just peeped over the distant peaks of Wales. Forty-three Irish juvenile athletes between the ages of 15 and 17 potter sleepily about the platform, waiting to board the boat bound for Holyhead. Their destination – the English AAA Championships in Bedford.

Once on the other side of the Irish Sea, they faced a four-hour bus drive to Bedford. With the cost of petrol giving rise to increased aviation cost Athletics Ireland resorted to the same travel mode that many athletes took in the 1980s.

The current crop did not care. For many, including Molly Daly, it was their first international. The Kilkenny City Harriers (KCH) athlete has had a great season, winning the national 200m. But for an unfortunate tumble in the 250m hurdles, she probably would have produced another win there too.

The first time competing in the green Irish vest is an exciting time for any athlete. Her parents, former international runners Fiona Norwood and Rob Daly, should know. Both have been there in the past and were in Wales to see her perform.

For other athletes like Gowran AC’s Billy Coogan, a great run of events has led them to the internationals on many occasions in the last 12 months.

Billy has competed an extraordinary five times for Ireland since making his international debut in the SIAB (Schools International) Track and Field steeplechase in August 2021.

He was competing in the steeplechase last weekend. The English age groups are marginally different from those in Ireland - similar to the school ages - requiring an athlete to be 17 on or after September 1. As Billy’s birthday is on September 1 he just about made the cut!

Having run 4.22 earlier in the year, his aim was to be as close as possible to this mark. The race was between four athletes:

Coogan, Tristan Tena Cumberland (Brecon AC), Dylan Stoneman (Bath AC) and Euan Supple (Bedford and County AC). With Supple struggling a little, he started to lag somewhat to the back of the group at the bell. As Supple dropped back, Cumberland moved from fourth to the front.

Once the pace had settled into its new higher tempo, Coogan took advantage of the complacency and drove on with 300m to go. This surprise move left Cumberland and Stoneman chasing.

While they did close in the home straight, it was too late as the strong confident strides of Coogan were not matched for the English pair. Coogan won with a time of 4.28.04 just six-tenths of a second ahead of Cumberland and eight-tenths ahead of Stoneman. With all three athletes so close it was one of the most exciting races of the day.

On Sunday it was the turn of Molly Daly to take to the fray. Nervous but excited, Daly lined up with the best in England. With a PB (personal best) of 25.42 her time was right up there with the top English girls. Daly easily won her heat in a time that was close to her PB. However, a lane infringement (foot marginally on the edge of her lane) resulted in her qualification for the final being rescinded.

While this was no doubt a disappointment for Daly, this type of incident occurs at least a few times in juvenile sprinters careers. The occasion is a learning experience and with the season now coming to a close Daly can reflect on a phenomenal season. There will be more occasions in that green vest for sure - her career is only warming up.

It has been a longer season than normal for the two Kilkenny athletes. For Daly, a few weeks’ rest is now well earned, but it won’t be too long before she will start her winter programme, building strength and confidence in preparation for what 2023 brings. For Coogan, it is straight into the cross-country season, where he will hope to emulate his 2021 top 12 place in the nationals later on this year.

Well done too, to all the coaches who have tirelessly worked with these athletes. All are volunteers and have given up their time to help them achieve their goals. They too can take a rest and reflect on their amazing achievements as coaches.

Athletes are reminded that the cross-country season is fast looming. The season begins with the St Senan’s AC Open Cross-Country, which will be held on Sunday, September 25 at 1pm. The season opener will see athletes from across the country flock to Kilmacow.

The St Senan’s Open is followed by the county championships. The action begins on October 2 with the juvenile even ages and senior in Ballycurran Cross, Tullogher. The following Sunday (October 9) is the uneven ages and Novice in Castlecomer. It will be great to see athletes make this the best cross-country season ever.