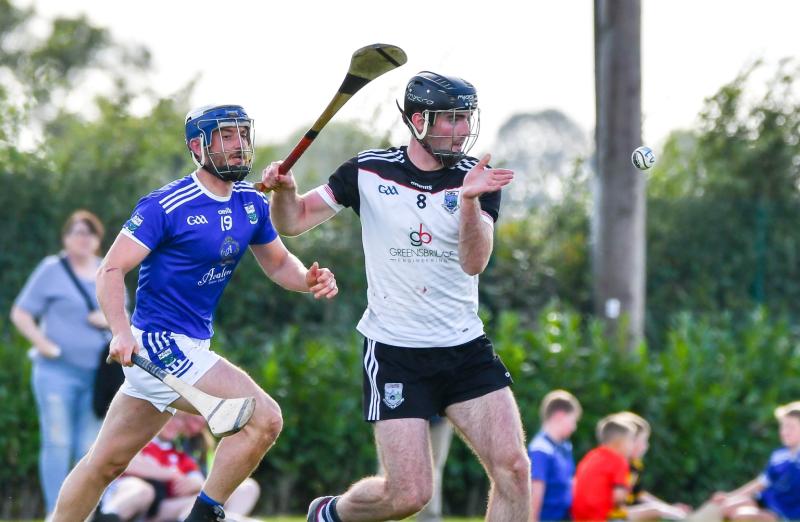 On a warm & windy Sunday afternoon in Gowran, Mullinavat continued their impressive run with a third straight victory as they defeated Erins Own Castlecomer who battled gallantly right to the very end.

Inspired by the oustanding duo of Ger Malone & John Walsh who contributed 0-12 between them along with the imperious Tom Aylward at full back, Mullinavat go into a 1st Round Championship clash against O'Loughlin Gaels in very good form.

The opening quarter was very poor with several missed chances on boths sides as Erins Own led 0-2 to 0-1.

Jack Buggy pointed a free in the 17th minute to double their advantage (0-3 to 0-1), before a Liam Fennelly goal in the 21st minute following a long delivery by Padraig Dempsey & pass by Ger Malone gave The South Kilkenny men a lead they never relinquished, 1-1 to 0-3.

Mullinavat dominated for the remainder of the half as points from Ger Malone with two superb efforts from play in quick succession in the 22nd & 23rd minutes respectively along with three from John Walsh (2 frees) gave them a 1-6 to 0-4 lead at the interval.

The Castlecomer men were right back in contention three minutes into the restart when the impressive Stephen Daly set up the on running Jamie Holohan for a well taken goal, 1-6 to 1-4.

Mullinavat maintained supremacy by the midway point of the second half as further points came from Ger Malone, John Walsh, Adam Mansfield & impressive midfielder & joint captain Padraig Dempsey, with Erins Own staying in touch thanks to points from substitute Kevin Holland, Stephen Daly & a Jack Buggy free, 1-10 to 1-7

Mullinavat produced their best hurling throughout that final quarter as further points came from John Walsh(3) - 2 from play - Joe Gahan(2), Willie O'Dwyer & another superb effort from play by Ger Malone in the 56th minute, 1-17 to 1-10.

Points were exchanged by a Jack Buggy free & Ian Duggan from play before the Erins Own men finished best with a goal from substitute Ian Holohan along with another point by Conor Fogarty.

However, time ran out for The Castlecomer men & despite the best efforts of substitutes Kevin Holland, Ian Holohan & Michael Murphy, Mullinavat were very worthy winners & full value for their victory.