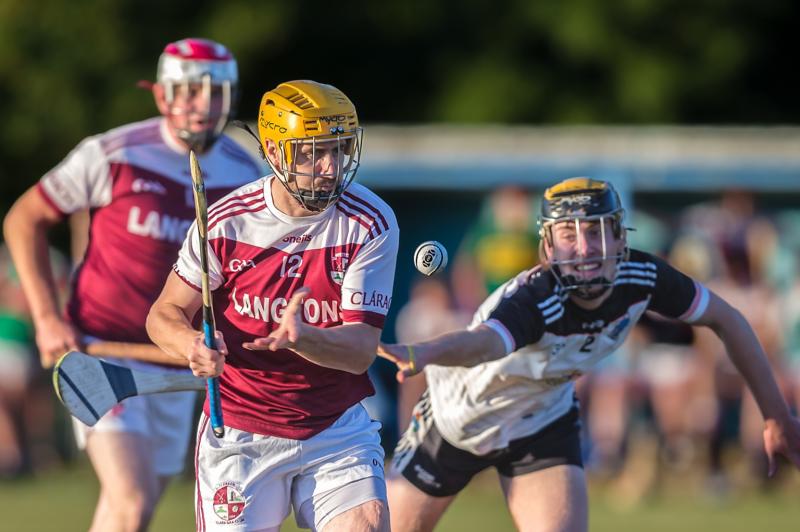 Liam Ryan was on song for Clara as they made sure of their place in the Shield final with a good win over Lisdowney in the last round of the league in Conahy at the weekend. Picture: Mark Desmond

Clara secured second place in Group A of the senior hurling league when comfortably overcoming Lisdowney in the fifth round in the Polo Grounds, Jenkinstown on Sunday afternoon.

Lisdowney enjoyed the advantage of the stiff breeze in the opening half and while they had moments of superiority during the opening 30 minutes, it was the winners who led by three points at the interval.

That made the task facing Lisdowney all the more challenging in the second half.

Given the strength of the breeze, Lisdowney were likely to enjoy plenty of possession in the first half and they made good use of the elements for much of that period.

Aidan Tallis pointed inside the first minute with Paul Cody replying with a fine effort from midfield for Clara on two minutes.

A strong period of dominance from Lisdowney saw them lead 0-7 to 0-3 on 12 minutes with Niall Brennan in good form at midfield leading their efforts.

Corner-back Richard McEvoy, their best player all afternoon, landed the first of his three points on 12 minutes.

Clara were always keeping in touch, though, thanks to the accuracy of Jason Byrne from frees and Liam Ryan.

Straight from the puck out Clara midfielder David Langton won possession and his delivery was caught by Chris Bolger who rounded his marker to shoot to the net.

That score brought the margin back to a point, with Clara now starting to take a grip on the game.

The winners had a little bother in the early stages with their short puck-outs, but they gradually sorted that out.

Their half back line of Shane Staunton, Matt Kenny and Martin O’Connell became the launching pad for many attacks and that trio played a big part in this impressive win.

Lisdowney battled gamely up to the interval, but their return of just four points in the closing 10 minutes of the first half left them facing an uphill battle after the break.

They started the second half well with a pointed free from Brian Kavanagh, but the play was mainly towards the Lisdowney goal during the second 30 minutes as the winners won endless possession to grow the margin between the sides with every passing minute.

Clara’s ability to win possession in defence and build up successive attacks with impressive off the shoulder passing was at the heart of many of their scores.

They also landed some impressive long range points from Liam Ryan, Shane Staunton, Martin O’Connell, John Murphy and Conor O’Shea to see them take a double-digit lead by the 42nd minute of the game.

The winners may not be too happy to have hit 17 wides, but such was their dominance that the strong breeze was inviting the players to shoot for distance.

Brian Kavanagh from a brace of frees and Richard McEvoy landed points for the winners and they managed to grab a consolation goal on the cusp of full-time when sub Aaron Fogarty caught a cross-field delivery to shoot to the Clara net.

Clara showed a great desire and hunger from the outset and Lisdowney did ask some searching questions of their opponents in the opening half.

But after the interval the winners displayed a fine team ethic and a work rate that overwhelmed their opponents.

Lisdowney are still a decent team but they are very low on confidence right now.

Their work rate, especially after the first quarter, was disappointing and they will need to rectify this in their opening round championship game in two weeks.