Kilkenny SHL-Sheehan helps ’Boro to derby victory over the Village 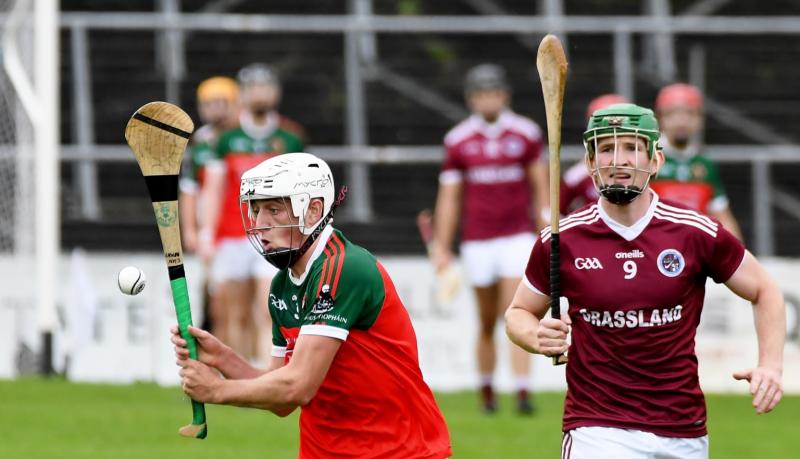 Cian Kenny keeps his eye on the ball for the Village. Pic: Willie Dempsey

Despite being something of a dead rubber, Dicksboro and James Stephens still provided decent entertainment during their fifth round senior league clash at UPMC Nowlan Park on Saturday afternoon.

Two first half goals from Bill Sheehan helped the Boro to victory but despite the four point margin, they were pushed close by their city neighbours.

Dicksboro were already assured of an automatic entry to the championship quarter-finals as well as a Shield Final spot prior to the game while the Village were forced into a relegation battle and while there was little to play for, both sides still played out an entertaining affair.

With the championship commencing the weekend after next, both teams took the opportunity to rest players with Dicksboro lining up without Cillian Buckley, Padraic Moylan and Liam Moore while James Stephens were minus Conor Browne and Niall Brassil.

Underfoot conditions were difficult on Saturday but it didn’t stop Dicksboro racing into the lead within 40 seconds after Conor Fitzpatrick ran forward before offloading to Bill Sheehan who took advantage of slack James Stephens defending to fire a shot past Gavin Costigan.

Dicksboro would never lose hold of that early advantage and they thought they had a second goal a minute later when Andy Gaffney found the net but the corner forward’s effort was ruled out for a square ball.

Eoin Guilfoyle then got James Stephens off the mark with a fifth minute free but by the halfway mark of the half, they looked in real trouble as Dicksboro scored 0-4 without reply.

Andy Gaffney made up for his chalked off goal with a free and a 65 before Mark Nolan and Alan Phelan opened their accounts from play.

Dicksboro also had a couple of near misses for goal during that spell and if it weren’t for some good last gasp defending, the game could have easily been over as a contest.

James Stephens soon found their way and they scored their first point from play in the 17th minute when Luke Scanlon got the first of his four points from play.

With the score at 1-4 to 0-5, James Stephens looked like they were right back in the game but again Dicksboro struck for goal as Sheehan found the target again as he rounded two Village defenders before kicking the ball to the net.

Scanlon replied with a point for Seamus Dwyer’s James Stephens side but they soon trailed the Boro by six when Aidan Nolan and Andy Gaffney both pointed for the winners.

Ross Whelan and Bill Sheehan then swapped scores before Whelan got his second point in as many minutes and with Luke Scanlon also finding his range, Dicksboro led 2-7 to 0-9 approaching the half-time interval.

Conor Fitzpatrick set up Andy Gaffney for a point that pushed the lead back out to five but James Stephens could have been much closer to their opponents by the change of ends as Guilfoyle broke through but his shot went wide after being well hooked.

Scanlon and Gaffney knocked over early second half points as the end to end nature of the contest looked like it would continue but the scores soon dried up.

After Gaffney gave Dicksboro a 2-9 to 0-10 lead, a barren scoreless spell of eight minutes followed which was only ended by points from Eoin Guilfoyle and the ever more influential Cian Kenny.

Kenny lined up in a much deeper role throughout the second half for James Stephens and done quite well so it will interesting to see where he’ll be positioned for the knockout action in the coming weeks.

His 42nd minute point left three between the sides but Dicksboro could and maybe should have went further clear after Sheehan and Harry Shine missed chances.

Alan Phelan did put his side four points to the good in the 50th minute but another Guilfoyle free left just a puck of the ball between the sides heading into the final few minutes.

Will Spencer then had a chance for goal but instead of shooting himself he tried to be unselfish and pass off to a teammate which resulted in the move breaking down and the ball been deflected wide.

Guilfoyle did convert the subsequent 65 to leave just two between the sides but in the extended added on time, Dicksboro had the energy to see the game out with Timmy Clifford pointing off the bench after returning from injury before Bill Sheehan finished the scoring.