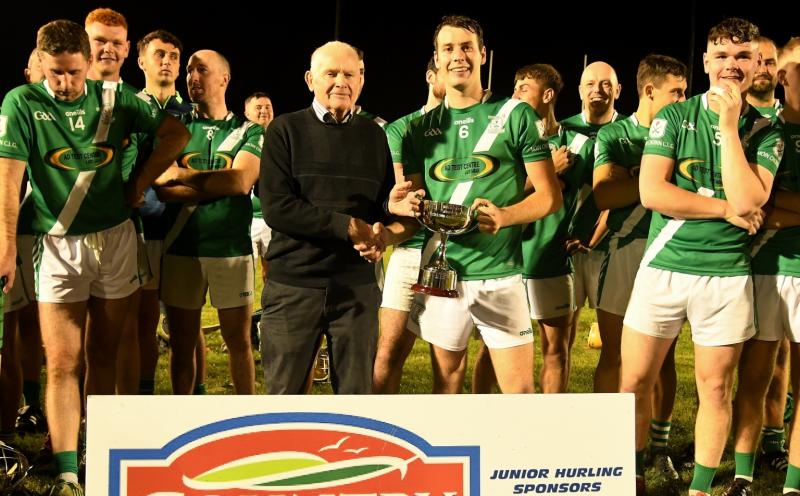 Ray Wall, who was superb for Mooncoin over the 60 minutes, put his side on the scoreboard from a placed ball in the third minute.

A sideline cut from Mooncoin’s Padraig Kinsella found the palm of Ray Wall and Ray sent it straight over the black spot for his second point of the evening.

Lisdowney responded and a pass from Ciaran Mackey to Gary O’Sullivan soared between the posts.

In the eight minute, a free taken by Andrew McEvoy dropped short and the Mooncoin clearance was intercepted by Ciaran Mackey who put it over the bar.

Mooncoin went on the attack – Robbie Finn, defending well, put the ball into open space and James O’Keeffe was first to react and laid it off to Mark Fitzgerald who was making a run up the middle.

Fitzgerald, drawing the Lisdowney defenders, flicked it on to Kieran Dillon Dunphy who finished it to the back of the net.

The final eight minutes were even more frantic – in the 24th minute, Andrew McEvoy dropped a placed ball short in front of the Mooncoin goal.

Niall O’Hanlon could only bat it away and Gary O’Sullivan was in the right place to deliver it to the back of the net.

A minute later, Eddie Kenny won the puck out in the air and offloaded to Paddy Bowden whose strike was unstoppable.

Mooncoin responded with a point from Michael Ryan and a super goal from James O’Keeffe in the 27th minute.

The sides closed out the first half with another point apiece, from Andrew McEvoy (f) and James O’Keeffe.

Mooncoin opened the scoring in the second half with a point from Mark Fitzgerald.

Lisdowney went looking for a goal which Dean Brophy was again denied and Andrew McEvoy pointed from the ‘65.

Sean Brennan took the quick puckout from Niall O’Hanlon and spotted Ciaran Walsh out on his own out on the wing and Ciaran had time to plant his feet, take aim and send the ball straight over the bar. .

It was still anyone’s game as the sides kept the pressure on and the Lisdowney half-forward line was playing well – Dean Brophy intercepted a Mooncoin pass and sent it straight over the bar and Paddy Bowden followed it up with a super point off the shoulder and the sides were level again on the 46-minute mark.

Ray Wall, never too far away from the play, scored the next two for his side, one from a placed ball.

Another two from the Lisdowney men saw the sides draw level again in the 56th minute.

A free conceded deep in Mooncoin territory in the 59th minute saw Niall O’Hanlon drop the ball in short and Padraig Murphy secured his side’s third goal of the night, much to the delight of the Mooncoin supporters.

Try as they might, Lisdowney couldn’t break the Mooncoin defence and Mooncoin closed it out with points from Kieran Dillon Dunphy and Ray Wall to secure a five-point win.