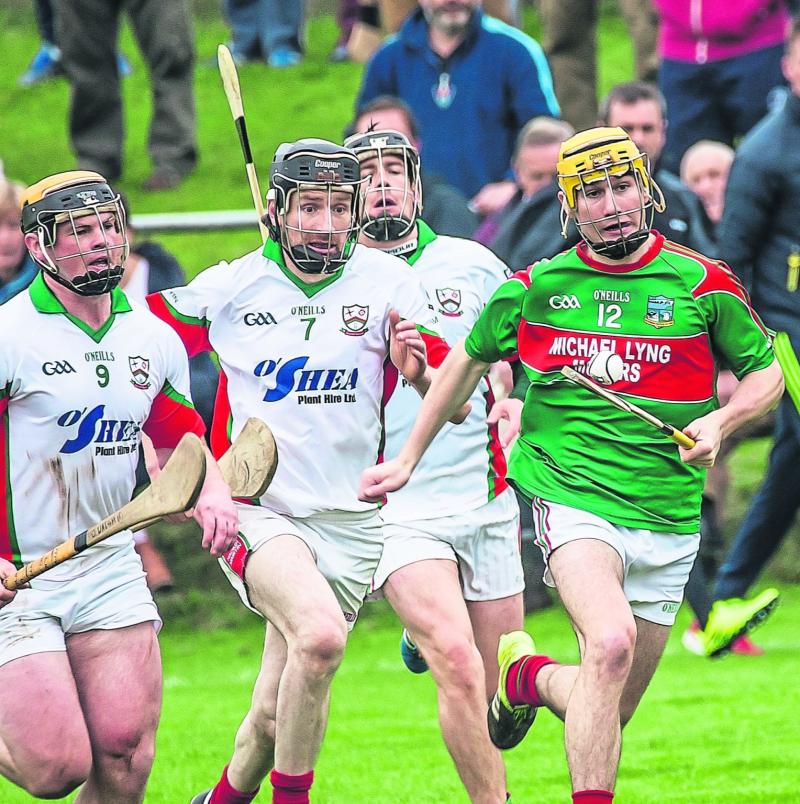 Rower-Inistioge and Mooncoin met in the final round of the Michael Lyng Motors Intermediate League in Mooncoin on Saturday.

Rower-Inistioge were quick out of the blocks and were five points up after 14 minutes.

Despite Mooncoin getting the perfect start to the second half when they goaled in the opening minute, Rower-Inistioge wrestled back control and ran out comfortable winners on a score-line of 0-24 to 1-11.

Rower-Inistioge registered the first score when Tom Murphy collected a long clearance and laid it off to Richie Leahy who slotted over from 35 yards.

Kevin Crowley responded in kind when he was found in space and pointed from 30 yards, 0-1 to 0-1.

The returning Darragh Joyce (RI), back from Australia, won a ball in the middle of the field and laid it off to Jim Ryan who made no mistake from 35 yards.

Rower-Inistioge then hit a purple patch and landed four unanswered points in a seven minute spell.

Tom Doyle scored a beauty from 60 yards before Richie Leahy hit three in a row.

His first a free from 60 yards after Jim Ryan was fouled before he collected a line ball from Jack Walsh and shot over.

The pick of the bunch was a magnificent line ball from 50 yards which dissected the posts, 0-7 to 0-2 after 14 minutes.

A pair of Richie Leahy frees then stretched the Rower-Inistioge lead to six.

Martin O’Neill did his best to try and gain a foothold for Mooncoin on their home patch when he gathered a mishit clearance and pointed from 70 yards, 0-10 to 0-5 after 24 minutes.

Rower-Inistioge’s last point of the half was the score of the game.

Tom Doyle flicked the ball one handed to Kieran Joyce who found the free scoring Richie Leahy and he made no mistake from 65 yards.

Ciarán Quilty cut the Rower-Inistioge lead to six from 45 yards in the 27th minute.

Mooncoin couldn’t have wished for a better start to the second half when a Killian Hogan shot for a point was spilled into the Rower-Inistioge net.

When the game was back underway after an injury, Pa Walsh won a good ball and picked out Adam Croke who rifled over to reduce the Rower-Inistioge lead, 0-13 to 1-7 after 43 minutes.

Richie Leahy then pointed a ’65 after his stinging drive was deflected around the post by Eoin Purcell in the Mooncoin goal.

Rower-Inistioge took a stranglehold of the game when they raced seven clear in the 52nd minute after three points without reply through Darragh Joyce, Richie Leahy and Kevin Murphy.

Paul Henebery (M) picked out Adam Croke with a great ball and he pointed from 45 yards to try and stem the flow.

A pair of Richie Leahy frees bookended a Ciarán Quilty (M) point from 45 yards as we headed into 10 minutes of additional time, 0-22 to 1-10.