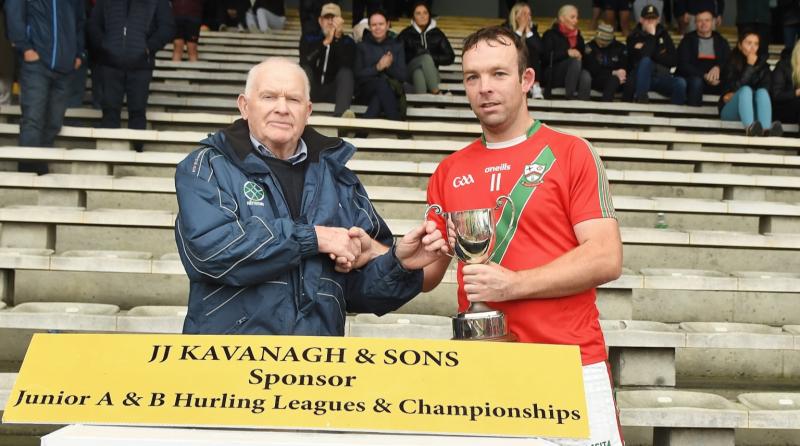 Wet conditions greeted the hurlers of St Martin’s and Conahy Shamrocks as they contested the Junior B county final in UPMC Nowlan Park.

Heavy overnight rain made for a much different game of hurling compared to the Junior C final, which was played less than 24 hours earlier under a warm autumn sun.

St Martin’s started as they meant to go on and with some great defending, only allowed Conahy score 1-1 from play over the course of the 60 minutes.

It was the fifth minute before the first score was recorded and it was St Martin’s who scored, with a goal no less. A number of passes outside the square from Robert Shore to John Mulhall to John Maher eventually found Josh Dempsey - his strike put the ball in the top left corner.

Three points from placed balls over the next three minutes and St Martin’s were looking comfortable, two from Jason Shore and one from John Maher.

It would take Conahy Shamrocks nine minutes before they recorded their first score, a Dara Dooley point from a placed ball.

John Mulhall, who was already covering a lot of ground, ran onto a placed ball that had dropped short and pointed with ease.
Mulhall followed it up with another lovely point just over a minute later after Cathal Keegan cleared a dangerous ball in from Conahy.

Conahy struck in the 20th minute when a line ball in from Dara Dooley found a St Martin’s defender. In their attempt to clear the ball, Rob Ring intercepted the pass and Brooklyn Sinnott finished it to the back of the net.

Jason Shore was causing a bit of bother for the Conahy full-back line and drew a number of frees which John Maher converted.

Dara Dooley appeared to be Conahy’s go-to man with a lot of the puckouts being sent in his direction – he was fouled in the 26th minute and he converted the free himself to keep his side in sight of St Martin’s.

A tussle on the St Martin’s endline in the 29th minute resulted in a ’65 being awarded to Conahy which Kieran Mooney duly scored.

John Maher closed out the half with another from a placed ball (half-time: St Martin’s 1-10, Conahy Shamrocks 1-5).

The second half started slowly, the conditions underfoot not helping matters and Jason Shore broke the deadlock in the 36th minute from a placed ball.

Conahy responded with the next three scores, a super point from Rob Ring when he caught a high ball from JP Gamble and two more converted frees from the ever-accurate Dara Dooley to bring it back to three points.

However, St Martin’s struck again in the 43rd minute – a ruck ensued about 30m out from the Conahy goal and a hand-pass out of the ruck found Colm Kealey, not long on the pitch – Colm offloaded to Jamie Morrissey, a half time substitute, and there was nothing Karl Downey could do as the ball flew past him to the back of the net.

Conahy never gave up and a couple of attempts to run the ball at the St Martin’s defence resulted in them winning a number of frees which were easily converted by Dara Dooley and Kieran Mooney.

The introduction of Jamie Morrissey at half time was paying off as he added two points to his earlier goal, both in the 56th minute.

St Martin’s continued to dominate for the last few minutes and Dan Comerford shut down any attack by the Conahy forwards.

The sides closed out the second half with the last three scores coming from placed balls – two for St Martin’s (John Maher and Darragh Quinlan) and one for Conahy (Dara Dooley).