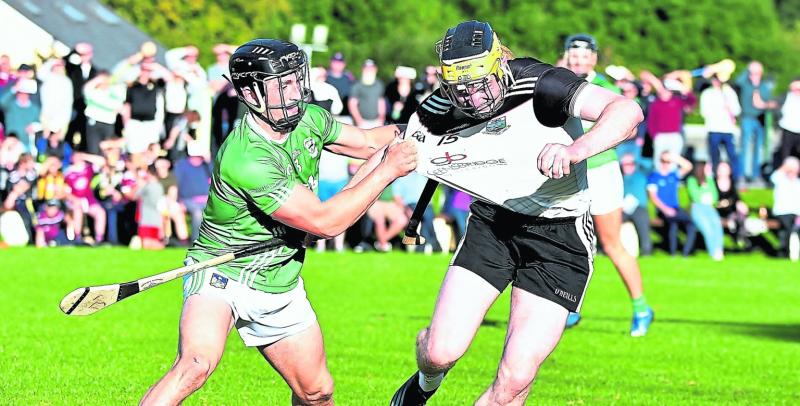 Mullinavat and O’Loughlin Gaels met in a tight and tense opening round senior championship clash in Ballyhale on Saturday evening and it was the Vegas boys who did enough to emerge as one point victors.

Goals from Ger Malone, Liam Fennelly and the superb Ian Duggan paved the way for the win for the South Kilkenny side but it was Duggan’s 62nd minute effort that proved the most important as O’Loughlin’s rallied late on in search of an equaliser.

Whatever way you look at though, Mullinavat were deserved winners as their workrate and intensity put O’Loughlin’s on the back foot.

While O’Loughlin’s were far from their best, the 2021 county finalists still had more than enough chances to win the game but their 14 wide tally saw them bow out.

Mullinavat’s goals coupled with O’Loughlin’s only getting 1-5 from play and three players on the scoresheet separated the two sides in the end.

Mark Bergin got O’Loughlin’s off to the ideal start with an opening minute point but it was joy that was short lived as Mullinavat went down the other end and found the net.

A ball inside from the evergreen Willie O’Dwyer found Ger Malone and while Stephen Murphy originally made a great save, the O’Loughlin’s keeper was left helpless when Liam Fennelly pounced on the rebound.

Bergin and John Walsh then exchanged frees as Mullinavat led 1-1 to 0-2.

It wasn’t long before Bergin got O’Loughlin’s third point from a 65 but prior to that, the city club created a goal chance which saw an Owen Wall shot brilliantly saved by Sean Fitzpatrick and if that went in it would have been a very different game than what transpired.

What transpired was a relentless Mullinavat effort and this was especially relevant when they scored four points on the bounce between the 8th and 16th minutes with Walsh and Ian Duggan scoring two points apiece.

The game then went through a 13 minute scoreless spell until Bergin and Conor Kelly found the target for O’Loughlin’s.

Mullinavat had the last say though as a Willie O’Dwyer point gave his side a 1-6 to 0-5 advantage at the break.

An O’Loughlin’s rally was expected in the second half but although Bergin scored the first point of the half, Mullinavat were the ones who took command.

A John Walsh 65 in the 36th minute pushed the lead back out to four points and when Ger Malone netted the winners second goal a minute later when fighting off David Fogarty before finding the bottom corner, it appeared as if it would be the ’Vat’s day.

Three O’Loughlin’s points via Bergin x2 and Paddy Deegan brought Andy Comerford’s team back into contention and while Walsh and Ian Duggan kept the scoreboard ticking over for Mullinavat, O’Loughlin’s kept coming.

Bergin, Deegan and Conor Kelly all scored in quick succession to bring O’Loughlin’s back to within a point but crucially they couldn’t get on level terms with Bergin, Jack Nolan and Matthew Russell all missing scoreable opportunities.

Mullinavat joint captain Ian Duggan then made O’Loughlin’s pay with a goal against the run of play and while Conor Kelly also goaled late on, it arrived in the final play of the game as Mullinavat held on to the delight of their supporters.