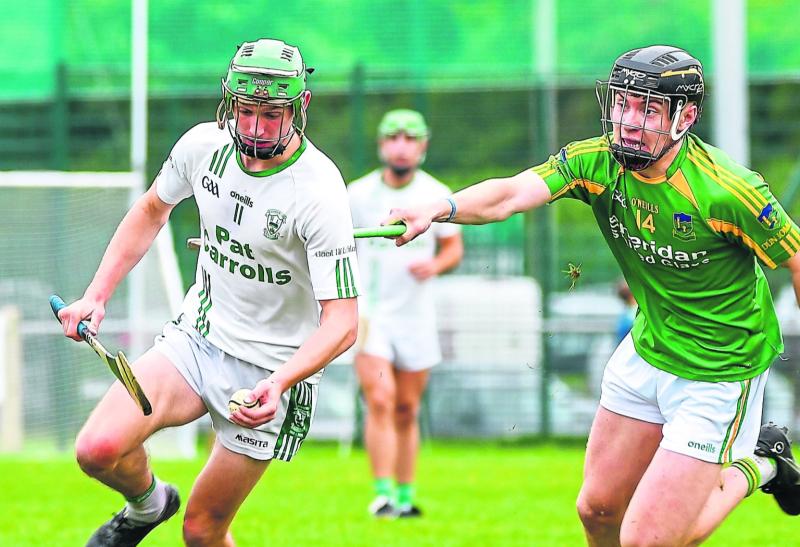 A sparkling first half performance from Darren Fitzpatrick proved to be ample inspiration as Dunnamaggin made sure of their place in the intermediate championship quarter-finals.

Fitzpatrick helped himself to 2-2 in the opening 30 minutes, the goals coming at either end of the half, as Dunna’ saw off a stubborn O’Loughlin Gaels in Danesfort.

Twenty-four hours after watching their senior side fall at the championship’s first hurdle, the Gaels’ second string were determined to avoid a similar fate. Although forced to line out without the championship-tied Sammy Johnston, Jamie Ryan and Matthew Russell, they made a lively start, Alex Sheridan popping over a swift point, but when Fitzpatrick burst through the middle on a bustling solo run and lashed a fifth minute shot past netminder Declan Murphy they must have suspected a tough afternoon ahead.

To their credit the city side didn’t drop their heads after conceding that goal. With Sean Bolger in fine free-taking form they hung on in there for the bulk of the first half. However, with Denis Walsh (0-2) and Eoghan Kearney sniping points, that Fitzpatrick goal gave Dunna’ a cushion they didn’t lose.

O’Loughlin’s needed a goal to get back into the game. They created two great chances in the first half, but luck deserted them when they needed it most. Alex Sheridan saw his 16th minute shot stopped by a blanket Dunna defensive effort - the rebound fell to Gary Kelly, but he drilled his shot wide.

Undeterred, O’Loughlin’s had another shot for a green flag in the 20th minute. Good work saw Jamie Young release Evan Walsh, who squared a ball for Fergal Brennan to latch on to, but his searing shot flashed across goal.

Dunnamaggin heeded the warning and raised their efforts again before the break. Peter Kenneally took two bites at the cherry to pick off a point, after his first attempt was blocked, before Fitzpatrick plundered his second goal, scrambling a loose ball over the line from close range.

That late scoring salvo proved crucial, as Dunna’ turned a three-point into six at the break (2-10 to 0-10).

Scores proved harder to come by in the second half, but taking the opening three helped Dunnamaggin copperfasten their advantage. Andy Hickey, Eoghan Kearney (free) and Darren Fitzpatrick all hit the target as the leaders stretched the gap to nine points by the 36th minute (2-13 to 0-10).

O’Loughlin’s needed a big score - and fast. To their credit, they got one when Gary Kelly turned a loose ball home after Sean Bolger’s 38th minute free dropped into his path, but it was their sole high point of the half. They didn’t score again until the 53rd minute, Oisin Murphy grabbing a point, by which stage the sting of their challenge had waned.

Dunna’ weren’t free-flowing in the scoring department either, but their half-time cushion meant they didn't have to go searching for more. Ray Cody did hit the net when his shot from out the right went all the way to the net, while three Kearney frees in succession meant they had the luxury of being able to sit back and wait for the final whistle against the Gaels, who finished with 14 men after goalkeeper Declan Murphy was sent off late on.