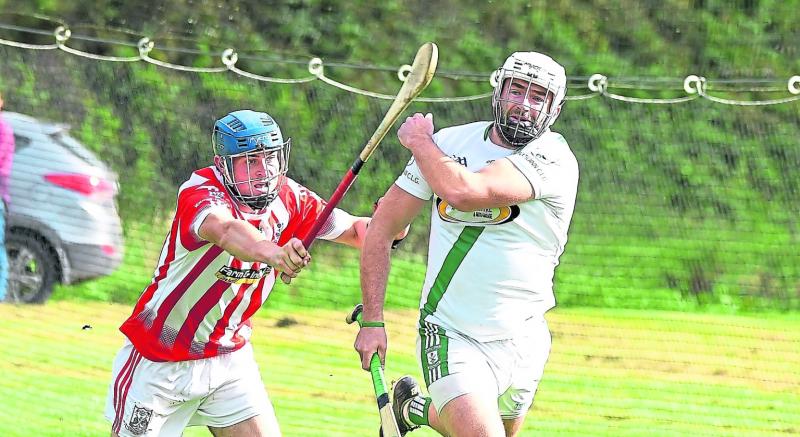 Mooncoin goalkeeper Eoin Purcell attempts to get a clearance away despite pressure from Ted Drea. Pic: Willie Dempsey

It was a goal-fest in Inistioge on Saturday as Mooncoin beat Young Irelands of Gowran in the opening round of the intermediate hurling championship.

The final scoreline is a bit flattering to Gowran as Mooncoin were much the better team over the course of the 60-plus minutes but even still, the All-Ireland junior champions were hanging on somewhat come the end.

With only two minutes of normal time remaining, Mooncoin had a nine point advantage but whether it was thinking the job was done or something else, Mooncoin allowed Gowran to get two quickfire goals from Paul Holden and Tommy Phelan.

Gowran even put in a lobbed free towards the square during the last play and while Mooncoin will have been relieved to have cleared their lines, they will still be wondering how they managed to conceded 4-20 in a game they were on top in for very long periods.

Prior to Gowran’s late rally it has to be said that Mooncoin were fantastic and on another day they could have scored double the amount of goals that hit the net as they broke through the Young Irelands defence on numerous occasions.

Ciaran Quilty was in phenomenal form for the winners as he scored 2-5 from play and with Sean Gannon, Paul Henebery and Adam Croke also pouncing for goals they certainly showed that they have more than enough talent to be very dangerous opposition for anyone over the course of the rest of the championship.

Gowran had a dream start to the game after Sean Carey found the Mooncoin net within 30 seconds of the throw-in.

Mooncoin weren’t behind for long though as after Patrick Walsh knocked over a free, Sean Gannon then got their opening goal with a nice finish after good build up play from Paul Henebery who was another player that Gowran struggled with over the course of the afternoon.

Tommy Phelan levelled the game with a free before three points on the bounce gave Mooncoin a 1-4 to 1-1 lead.

Ciaran Quilty got two of those points either side of a Walsh score from play and although Young Irelands soon got the deficit back to the minimum, they were on the backfoot again when Mooncoin goaled for the second time in the 8th minute.

It was that man Quilty who used his pace to get in behind the Gowran defence and he finished to the net in style.

Mooncoin raced six points clear as a result but Gowran were proving to be stubborn opponents to shake off and they again got the deficit back to one before Adam Croke scored Mooncoin’s third major just before the break.

A fourth goal at the beginning of the second half looked like it was curtains for Gowran as Paul Henebery got in on the act but despite Mikey Carey going off with an injury, Gowran stayed in the fight when sub Paul Holden took advantage of a poor puckout from Mooncoin’s Eoin Purcell to score his side’s second goal.

Ciaran Quilty then scored Mooncoin’s fifth goal in the 55th minute to move 12 points clear and with such a big lead you’d forgive them for their slow finish as Holden and Tommy Phelan scored what proved to be consolation efforts.

The crowd that was in Inistioge got full value for money in what proved to be an end to end extravaganza as Mooncoin move on to the quarter-finals.