Theatre at its best from KATS 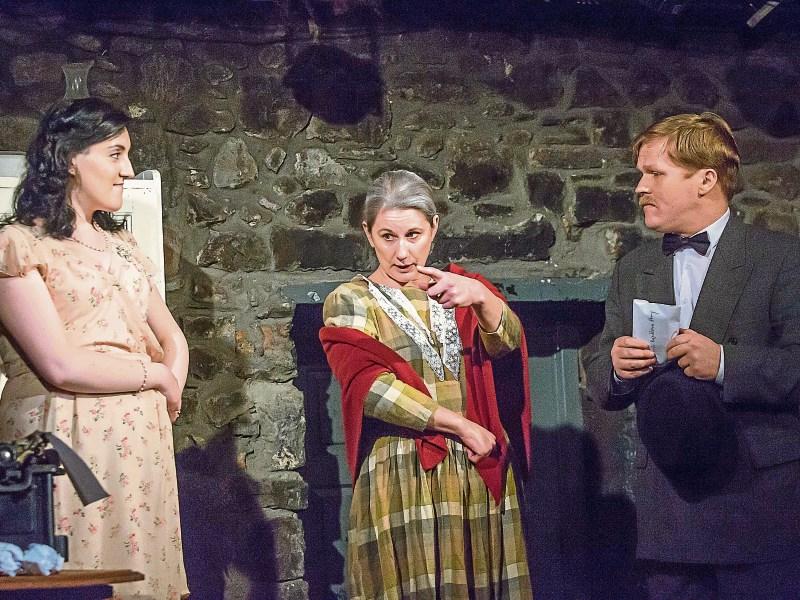 The theatre space at Cleere’s, Parliament Street is transformed into a 1920’s Dublin tenement room for the latest production from KATS Theatre group. Our current political upheaval, combined with the 1916 centenary celebrations, make this a fitting time to stage Sean O’Casey’s ‘Shadow Of A Gunman.’

The play was first produced in 1923, but the subject matter is still relevant over 90 years later. The early part of the play focuses on the relationship between the two roommates, Donal Davoren (Ciaran Dunphy) and Seamus Shields (Alan Grant). Davoren is a poet and romantic, while Shields a smalltime trader, peddling hairpins, zips, pins and braces, is a realist, barely clinging to a living in very hard times. These performances are central to the play, as they remain on stage for the full 90 minutes. They both display a level of false bravado, but the real courage is displayed by Minnie Powell (Emma Burke) who’s courage leaves both Davoren and Shields feeling guilty and ashamed. It is she who stands up to the raiding Black and Tans, while the men of the tenement cower in fear.

The miserable lives of the tenement dwellers is brought across by the large cast. Particularly strong and very funny performances come from Kevina Hayes and Peter Madden as the Grigsons, Dee Gibney as Mrs Henderson and David Brydone as Mr Gallagher. Strong support, under the tight direction of Alan Butler, comes from Jim Carroll (Mr Mulligan), Andrew Rice (Mr Maguire), Adrian Kavanagh (Tommy Owens) and Tim Slight (Auxiliary Soldier) in the smaller roles.

The play is usually performed in two acts, but the KATS production runs straight through, building up the tension before the final dramatic and tragic events.

The Shadow Of A Gunman has long been considered a classic of the Irish theatre. This is a timely and relevant revival, full of wonderful performances from the brilliant cast. There is plenty of laughs, but it is best described as a tragicomedy. “Oh, this is a hopeless country!”exclaims Seamus Shields. After the political events of the last few weeks it is a remark that is just as relevant today.

The Shadow Of A Gunman continues at Cleeres from Wednesday 9th until Saturday 12th March at 8pm nightly.