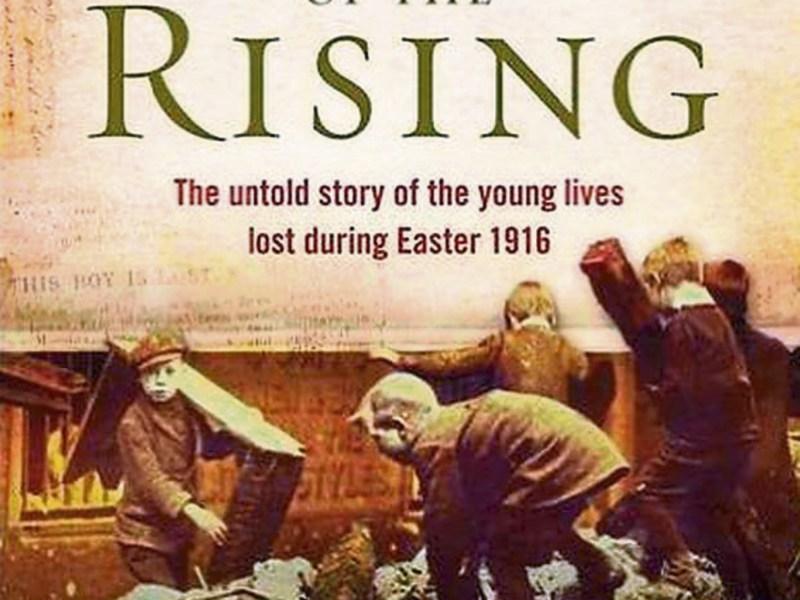 Joe Duffy’s Children of the Rising documents the lives and tragic deaths of the 40 children aged 16 or under who were killed during the Easter 1916 rebellion.

He paints a vividly grim picture of the social history of early 20th century Dublin. One third of the 300,000 people in dwellings between the Royal and Grand Canals were under 16 years of age. Living in such close quarters meant the children had possession of their city and the freedom to explore. The maths of large families in tenements, with low resources, was usually 3 families in 3 rooms totalling 15 or more people. Living so closely, with most diseases still rampant, the survival rate for those under 10 years of age was less than 40%. Almost half of the 40 children were in employment in 1916. At 14 a child could leave school and in most cases they had to out of economic necessity. 10 of the 40 killed had brothers or fathers fighting in WWI in British uniforms. One child, Eleanor Warbrook (15) from the Liberties had two brothers killed a few months either side of the rising. With such emotional connections and with economic dependence upon the separation wives allowance, it is not surprising that in the first few days of the rising women from these families stormed the rebel barricades like “French revolutionary furies.” Eleanor herself was killed during one of these hostile encounters, which forced some rebels off the Liberties’ streets and into Jacobs Biscuit factory. So many women and children also took to the streets that week to furnish food for their famished families, at times resorting to looting. In fact in May 1916, the group of people recorded as committing the most crimes was married women. Joseph Murray (14) was one of the children killed after having been despatched by his family to buy some bread during the Friday curfew. While some children dodged bullets on the streets, others were not so fortunate. Madge Veale (13) of Haddington Road was shot at her front room window, her khaki jumper mistaken for a combatant’s uniform. Christina Caffrey (2) was killed in her mother’s arms outside her front door in the sub-tenement standard Corporation Buildings near what is now Connolly station. Paddy Fetherston (12) was sitting in a boxcar in the open market between Henry Street and Great Britain Street (now Parnell Street) when he met his end. His brother Jack (14), a runner from the GPO to the Four Courts, draped his younger brother’s coffin in the relatively unfamiliar tricolour. Surprisingly only 3 of the 40 children were actively involved in the rising. All 3 were members of Na Fianna Éireann, a republican youth organisation. Sean Healy (14), on account of his youth, was ordered home from the barricades. Unfortunately on his journey home he attempted to deliver a final message to some rebels and was shot dead. He was the only one of all the children to be publicly remembered in any way after the rising. Duffy details the compensation awarded to these families, many of whom depended on their children’s income, from the Rebellion Victims Committee. Arduous does not get close to describing the lengths they had to go. The average awarded was £25 for each child’s life. The Irish version of the committee, which formed much later, was equally callous in how it dealt with families, unless of course you were from the family of a prominent rebel. When Katie Foster’s son Sean was shot near Stoneybatter, as she walked him in his pram that very first Easter Sunday morning, it was a double tragedy for the woman as her husband had already died in France at Aubers Ridge, one of the 103 Guinness workers who died in the Great War. Her already reduced allowance was reduced even further when the authorities heard she had one less mouth to feed after Sean’s demise. Joe Duffy interweaves social history and his own family’s story with curiosities and coincidences throughout this beautifully illustrated book. For example, Lionel Sweny (14) was the son of pharmacist Frederick Sweny whose business in Westland Row still bears the family name under which Leopold Bloom sauntered to buy his bar of soap in Ulysses. Or the story of the budding young writer Bridget McKane (15), accidentally shot when her house in Moore Street was stormed by the retreating rebels and how 5 of the 7 signatories ended up in her room, where intriguingly a connection to the singer Luke Kelly emerges. Regarding the sea change in people’s opinion after the rising, undoubtedly the executions had an enormous bearing, but he attributes huge significance to the North King Street massacre of innocent Irish civilians by the Staffordshire regiment. In that slaughter Christopher Hickey (16) and his father were callously killed by British soldiers along with 12 others. Duffy suggests that the deep impact of this atrocity on public opinion at the time is underestimated, or even lost, 100 years later. He categorises the book in such a way that not only are the 40 innocent lives remembered but it also serves as a withering critique of the social conditions of the time. His research is thorough and detailed, lightened by a conversational style of writing that is engaging and unfussy.