Perfect start to Roots on Thursday in Cleere's 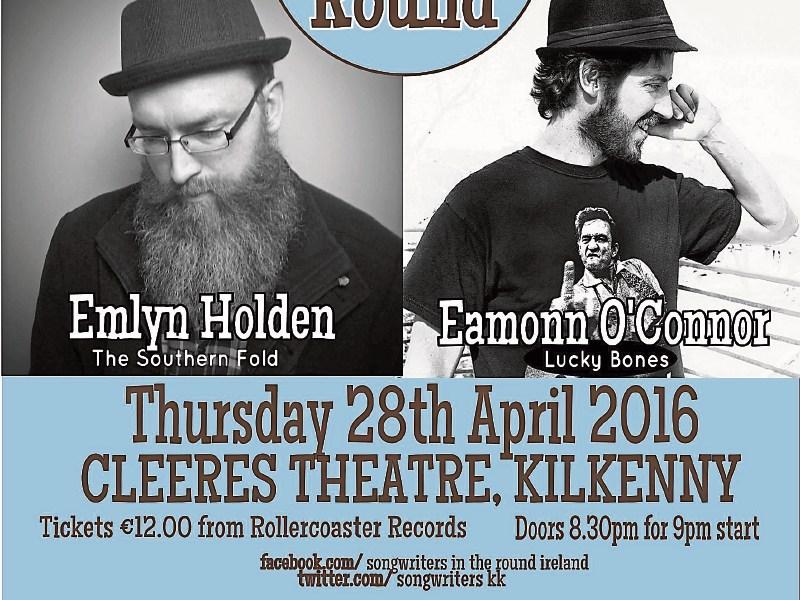 Looking for the perfect way to ease into your Smithwicks Kilkenny Roots Festival?

Songwriters in the Round are having their Roots special event as they did last year to a packed house in Cleeres.

They are back in Cleere's a with special guests Ed Romanoff, Luan Parle, Eamonn O'Connor (Lucky Bones) and Emlyn Holden (The Southern Fold) who will perform 'in the round' and share the stories behind the songs.

Ed Romanoff's self-titled debut was a Roots Radio Top 100 in the U.S., and ranked as high as number 12 on the European Americana Charts. The album received four stars from the London Telegraph and includes cameos by Josh Ritter, Tift Merritt, and Mary Gauthier. Eds’ true stories range from staring down the barrel of a shotgun, to cattle branding in Wyoming, to finding out recently he’s not Russian as he’d always believed but Irish. His song St. Vincent de Paul won Song of the Year from the Nashville Songwriters Association. Ed was a Troubadour Finalist at The Telluride Bluegrass Festival and recently joined Lyle Lovett and Steve Earle as a New Folk Winner at the Kerrville (Texas) Folk Festival. He splits his time between New York City and Woodstock with his rescue dog, Freckles.

Luan Parle is not just an accomplished performer, but a remarkably talented lyricist who has collaborated with some of the best songwriters and producers in the industry, including Grammy award winning producer, Bill Bottrell and hit songwriter, Billy Steinberg. Due to popular demand, Parle completed a sell out out Irish tour with renowned guitarist, Clive Barnes. Following a hugely successful European headline tour, demand for additional dates, in both Ireland and overseas, have resulted in further shows and venues being added to the engagement schedule and an extensive US & European tour in 2016.

Lucky Bones aka Eamonn O’Connor is a definitive member of the storytelling breed of songwriters. A troubadour who has for more than ten years been tirelessly touring across Europe and the USA in between releasing two records (“Together We Are All Alone” 2011 and “Someone’s Son 2013”) and releasing a brand new EP “Blessed” at the beginning of 2015.

His sound has won critical acclaim at home and abroad. With comparisons made to Ryan Adams, Bruce Springsteen, Townes Van Zandt and Tom Waits.

Co. Kilkenny native Emlyn Holden has been playing guitar and writing songs since his early teens. Drawing on influences ranging from old traditional American country and folk music to Beat Generation writers and punk rock, he lists Hank Williams, Kurt Cobain and John Lennon amongst his favourite songwriters. He is currently a member of the Kilkenny/Dublin band The Southern Fold who have been busy in the recording studio of late.

This intimate Songwriters in the Round Roots Special is this Thursday 28th April in Cleere's Theatre. Doors are 8.30pm for a 9pm start. Tickets are twelve euro and available in advance from Rollercoaster Records.