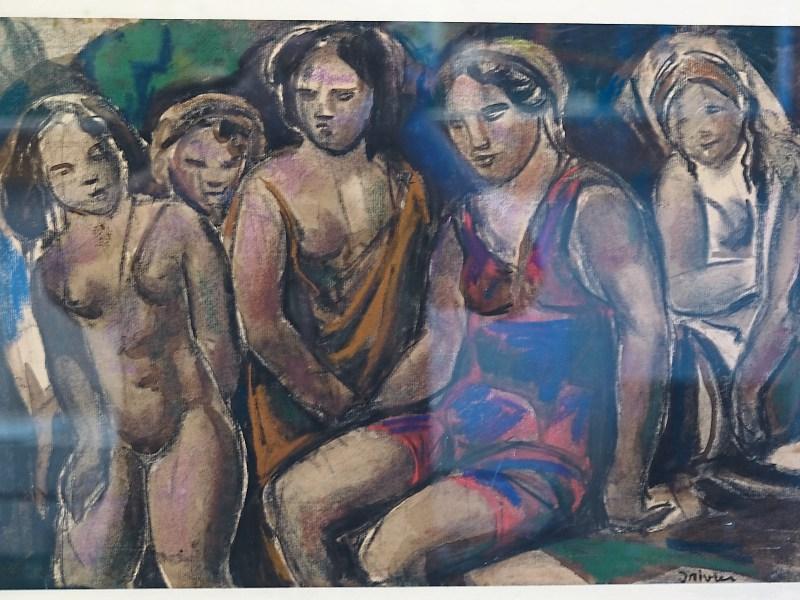 Amongst the items which will be on display at Inistioge’s Mermaid Gallery which re-opens on Friday 29 April 29, are three works by the French artist, Leon-Ernest Drivier (1878-1951), who is chiefly remembered to-day as a sculptor.

Drivier was born in Grenoble, France, where he studied under local man, Eustache Bernard.

From there he proceeded to the École des Beaux-Arts in Paris, and from that prestigious school, he went to the studio of the now famous Rodin. Drivier’s monumental sculptures are to be found in various European collections. Works by this artist are not frequently seen in Ireland.

The naked female form became a dominant theme in his drawings, gouaches and watercolours as the accompanying illustration demonstrates.

This work and two accompanying pictures, were acquired from the artist by Lucy Wertheim who was an influential London based patron of his. It would appear that she kept these all her life. Ms. Werthier was very involved with the Daily Express sponsored exhibition “English Artists under Forty” which took place in London in 1927. She was also influential with many of the artists of the later White Stag Group, a number of whom lived and worked in Ireland, which the Gallery also has e.g., Basil Rakóczi and Kenneth Hall.

The brother and sister Raymond & Eileen McGrath, of Australian birth, are also represented. Raymond worked for most of his adult life here in Ireland where he was employed by The Office of Public Works. His sister, Eileen has a large following in the States where many of her pictures are set.

The Mermaid also has many new works by local artists: Sean Hardie, Richard Warner, Gerard Casey and Caroline Murphy. Also in the collection are two equestrian studies of racing horses by a young Polish Dublin based artist, Robert Zurow, who before coming to Ireland studied at the School of Visual Art and Photography in Lublin, Poland.

Richard Warner has had many exhibitions both in his native England as well as here in Ireland, where he has lived for many years. Gerard Casey, a well-known Kilkenny city (and Bennetsbridge) artist has two pictures in the opening exhibition.

The work by Caroline Murphy is represented by a number of equine bronzes and dogs and also by a ceramic representation of a great brown bear, which is stunningly real. The influence of the great Renaissance artist Leonardo da Vinci is to my eye very apparent in her equine bronzes. A very beautiful representation by her of a nineteenth-century French hunt, on tile in raised relief, had just arrived in the Gallery last year when it was snapped up by an English visitor who took it home to Worcestshire.

This portrait was bought many years ago at the dispersal sale in Kilmurry House which was conducted by McCreery’s for Mrs. Kathleen (Kitty) Brocklebank, sister of Mrs. Doreen Archer Houblon. The artist’s identity was only discovered when the portrait was conserved last year. It and its companion used to hang in the inner hall at Kilmurry House, Thomastown. The Gallery will be open for the Summer on Fridays and Saturdays (10.00 to 5.00), Sundays (1.30 to 5.00) and on Bank Holidays - other times by appointment (085-7484291).