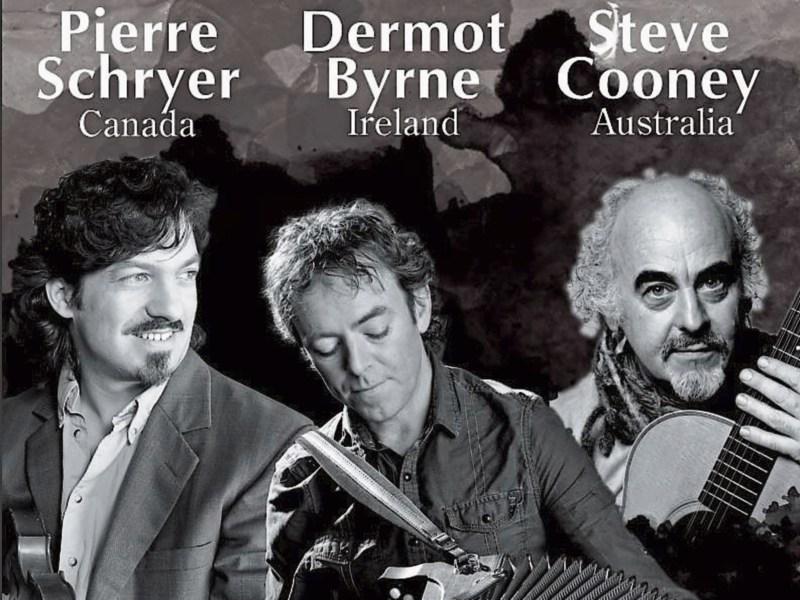 Dermot Byrne, one of Ireland’s finest traditional accordion players, is doing a short tour of the country in late April early May and has joined with close confidant Steve Cooney (Guitar/Vocal) and Canadian Pierre Schryer (Fiddle).

They are playing at the Home Rule Club, Kilkenny on Friday, May 6.

For many years a member of Altan, Dermot performed, recorded and toured extensively with the group along with artists like Donal Lunny, Steve Cooney and Stephane Grapelli, bringing

the beauty and joy of traditional Irish music to audiences all over the world. In other collaborations he has performed with Frankie Gavin, Sharon Shannon, and The Stunning along with many other outstanding Irish and international musicians. For his contribution to

Irish music Dermot was chosen as TG4's Traditional Musician of the Year 2013.

For this tour Dermot will be joined by Australian Steve Cooney on guitar and Canadian Pierre Schryer on Fiddle.

Australian-born guitarist, bassist, producer and didgeridoo player Steve Cooney is one of the most dynamic modern performers in traditional music. He has played with Stockton`s Wing, Sharon Shannon, Seamus Begley and Sinead OConnor.

Pierre Schryer Pierre is one of Canada’s leading traditional fiddlers. JUNO nominee, Canadian Folk Music Award nominee, and celebrated performer and producer. He was immersed from an early age in the Franco-Ontarian traditions of his heritage, through multiple fiddle competitions along with his triplet brothers. The Schryer Triplets recorded two albums and appeared several times on the “Tommy Hunter Show.”

As a solo performer Pierre has received numerous titles and awards including Canadian Open Fiddle Champion, Canadian Grand Masters Fiddle Champion, Violoneux Championnat, and North American Irish Fiddle Champion. Over the last 15 years, Pierre has released six solo recordings on his own label, New Canadian Records, including “Blue Drag”, which was honoured with a nomination at the 2004 JUNO Awards for best Roots and Traditional Album of the Year, and “Mélange”, which was nominated at the 2008 Canadian Folk Music Awards for Instrumental Solo Album of the Year.

Pierre has shared the stage with many colleagues in the traditional music scene including Natalie McMaster, members of Leahy,  the Barra MacNeils, Ashley MacIssac, Liz Carroll, Matapat, Club Carrefour, La Bottine Souriante, Altan, Old Blind Dogs, Chieftains, Jane Bunnet, and others. He has performed with numerous symphony orchestras across Canada

with his acclaimed Symphony Pops show. Pierre is the creator and artistic director of the “Canadian Celtic Celebration”, a three-day

festival presented in Thunder Bay, Ontario each June. A native of Northern Ontario, Pierre is

proud to continue planting roots in the north with his wife, Thunder Bay Symphony Orchestra’s renowned trumpeter Merrie Klazek, and their lovely children, Kyran and

Tamsyn. Tickets (€12) for the concert are available from Rollercoaster Records, Kieran Street, The Home Rule Club, or contact 086 2430372 to book.