Celebrating the work of two renowned artists at the Mermaid Gallery 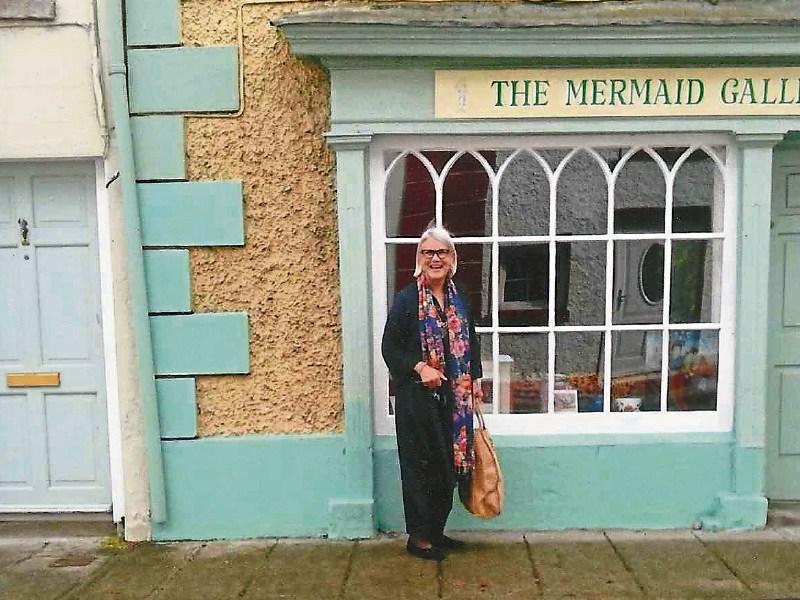 The Mermaid Gallery in Inistioge, is currently putting in place a special exhibition which will have as its focus the work of two women artists : Caroline Couchman and Adrienne Syms.

Both women who have exhibited many times over their careers, received their initial artistic training at NCAD. Caroline later went onto study at the Sorbonne, while Adrienne studied at TCD. Caroline’s work includes ceramics, bronzes and oils while Adrienne’s are oils and etchings.

The works of these contemporary artists will be surrounded by the work of such ‘ancients’ as Mildred A. Butler of Kilmurry, Thomastown ; ‘Shadow’ Lady Cuffe of Lyrath, Kilkenny; Kathleen Marescaux of Inch Holohan & Bonnetstown Hall, Kilkenny and Baroness Pauline Prozaska, also of Lyrath.

The Gallery also has works by Mainie Jellett (1897-1944), Alicia Boyle (1908-97), Dorothy Blackham (1896-1975) and Eileen McGrath, sister of Raymond McGrath,‘God’s Architect’. Alicia Boyle’s ‘Greek Fishing Boat’ is a very striking watercolour, signed and dated 1939, evidence of a moment of peace before the Europe was in gulfed by the second world war.

The well-known mother and daughter artists, Elizabeth and Phoebe Cope of Shankill Castle, Paulstown, are also represented in the exhibition. Phoebe has sent in two large works which feature the studio of a German friend, Madchen, while her mother’s works derive from a South American painting trip which took place early in 2014.

The Mermaid Gallery which specialises in early 20th century Irish art as well as contemporary art, has a body of work by artists associated with the White Stag movement. Here we find for example Basil Rákóczi’s (1908-79), abstract work entitled ‘Wooks Marching’. Rákóczi was the son of a Hungarian father and an Irish mother. Another large work by him is his ‘Woman Raped by a Teapot’ which dominates one wall of Gallery 3. This dates from 1956. That same year Hungary was being raped by the Soviet Union and its fight for independence savagely put down.

Kenneth Hall, (1913-46) another White Stag painter is represented by a startling self-portrait, as well as by his more peaceful ‘Children’s Park’. Yet another artist belonging to this group is Phelan Gibb (1870-1948), who was much influenced by Cézanne. The gallery has a number of works by this artist who is known as the Irish Fauve which includes his ‘Landscape with Trees’ as well as his ‘Church Interior’ from Buckinghamshire. These two works and other by him in the gallery were part of the exhibition which IMMA mounted at the Royal Hospital Kilmainham in November 2011.

A series of fine pictures by Christopher Campbell are also to be found here and one of my particular favourites is his ‘Hard Labour’ which is signed and dated 1939. Other Irish artists include Sir William Orpen (1878-1931) and from him we have a brothel scene which features Augustus John, with his familiar hat. Barry Flanagan (1941-2014), whose large outdoor sculptor of a hare was on display at Kells Abbey some years ago is represented by two works. There are also works by J.P. Dunleavy and Paul Egestorff.

Pictures by contemporary artists such as Richard Warner (studied Chelsea College of Art), Sheestown, Sean Hardie, Skeoughvosteen (a member of the Killoughternane Group), Gerard Casey (professor at WIT), Bennetsbridge, David Hayes (graphic artist Dublin who designed my book Kilkenny families in the Great War), Dublin, John McKelvy Griffin, Dublin, Blaise Smith, Dungarvan & Canon John Flinn, Kells, Robert Zuraw, a young Polish artist, who works and lives in Dublin is represented by two large equestrian studies of racing horses. Robert, who grew up in Leokadia not far from Warsaw, studied in the School of Visual Art & Photography in Lublin as well as receiving private tuition. The gallery also has works by contemporary English artists John Pickering and James Campbell, some of which were on show in the Cotswolds last year.

The exhibition, which will be in place from the middle of July, will be on view on the usual Gallery opening days: Friday afternoons, Saturdays, Sunday afternoons and Bank Holidays. One may also view by appointment 085-7484291.