Despite many heartaches and surviving cancer, Claire Henriques continues to share her precocious talent for acting 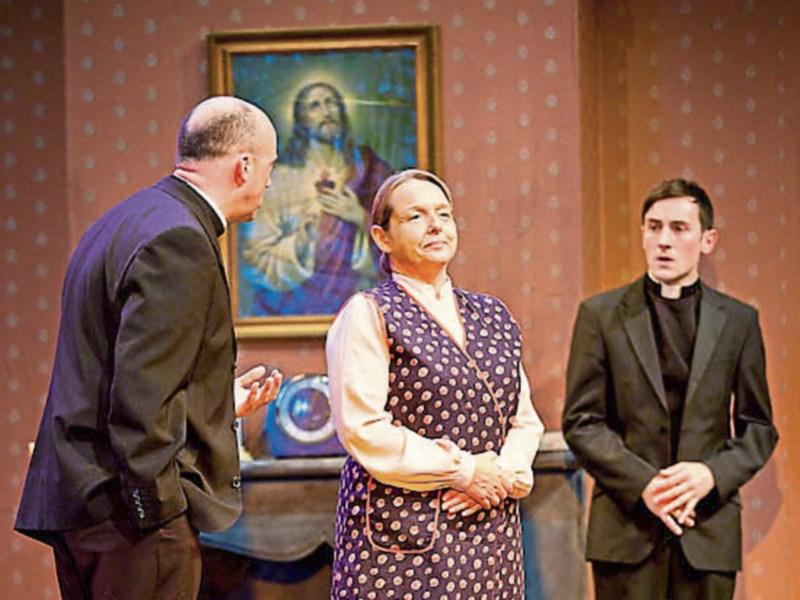 It was back in 2000. Donal O’Brien was doing his traditional “go raibh mile maith agaibhs” after a captivating performance of the Charles Strouse (Music) and Martin Chapman (Lyrics) musical, Annie.

A young Callan lassie had given a terrific first-time performance in the role of Miss Hannigan.

On the night, and for every evening during the six-night run, a sizeable group gathered in the auditorium, out in support of the young Callan lass.

They were nervous for the Callan girl. There was a chasm of difference between St. Brigids College Concert Hall in Callan, performing in front of your own, and with your own, and the highly-rated Croke Park of The Watergate Theatre, with its national acclaim and status in the pantheon of Irish theatres. O’Brien singled out the performance of the young Callan girl, adding, “Claire Henriques gave a superb performance as Miss Hannigan, and if ye have any more like her out in Callan, send them in here to us”; a remark that brought a warm glow, and extra applause from the Callan crowd.

That was the start of the long association with the Watergate for Claire. Was Annie her Sherpa Tensing moment from a public performance viewpoint? To earn the acclaim of her peers, like the talented Watergate Aosdána, O’Brien convinced many that Claire had “arrived”. Her subsequent performances in other productions would lead one to believe that she had a special talent.

She was born in London to a Threecastles nurse, Kitty Lennon, and a Galway born father, Barrie who spent half of his young life in Portarlington.

Like many emigrants, Barrie and Kitty returned to Callan, bought a pub and settled to rear their family of two boys (John and David) and two girls (Claire and Julie). Life was good for the returned emigrants. Claire went to St. Brigids in Callan.

She developed her own carefree, bubbling, and ensnaring sense of humour. Her Mam and Dad will tell you that she was a very confident child with a delightful instinct for “showing off” whenever the occasion presented. She was first, middle and last when it came to performing in the Primary School Nativity shows with Sr. Louise (Phelan).

Her interest in performing flourished as she progressed through the forms of St. Brigids Secondary College. When Claire was only sixteen years of age her only sister, Julie, passed away at fourteen years of age.

That event precipitated a long and tough road for a young Claire and her wider family. Four years later her family were rattled when her mother Kitty was struck down with a double whammy of the dreaded Big C.

Three years further on, Claire broke her back from a fall off a horse, which necessitated major surgery, rods down her spine, the medical fusion of vertebrae, hospital confinement and rehab for over twelve months.

The turn of the century was marked for Claire when she was diagnosed with cancer of the lymphatic system. So life for the young Callan girl was far from being a bed of roses.

But she was a battler. Even in her darkest days, her faith-although often tested- and her reliance on the help she received from her sister, Julie, propped her up. Eventually her life picked up somewhat.

It really couldn’t have made anything but an upward curve, and Claire eventually got back on the horse, metaphorically speaking.

She will admit that her involvement with the Watergate, and the friendship and camaraderie she encountered there, were elements central to her progressive improvement.

Claire played in a band called the River Kings as female vocalist. With her were John Cullen, John Foley, Gerry Delaney, and Steve O’Connor. She had played Eliza Dolittle in the St.Brigids College Musical, My Fair Lady. Having completed her second level education, she got involved with the Callan Variety Club.

Singing, acting “the eejit”, transiting to straight drama - Claire could handle it all. She had leading roles in the Variety Club’s productions of Louis Dalton’s The Money Doesn’t Matter, and Thomas Coffey’s Anyone Could Rob a Bank.

As a result of the Annie experience, Watergate Productions quick to recognise her talent and, before long, Claire had a become a regular, not to mention a real favourite, in the Kilkenny pantomime scene.

She went on to join the Kilkenny Musical Society in earnest. In 2001 she played Stella to Michael Hayes’ Archie Dean in Peter Kennedy’s “God Bless Archie Dean”-one of the best comedic musicals ever staged by the society. Claire was nominated for an AIMS Award for Best Comedian. She played Katisha in the much acclaimed Hot Mikado in 2005. Still involved in the Panto Carousel, she continued to wow her audiences in Productions like Cinderella, Little Red Riding Hood, Beauty and the Beast, and many others. From the moment she stepped before the footlights, she positively hypnotised her audience into subjection.

In 2009, Watergate Productions, or should I say the Theatre manager, Gerry Cody, took a huge gamble when playing Claire opposite the astonishingly talented, Watergate doyenne, Mary Cradock in a production of the Martin Mc Donagh play, “The Beauty Queen of Leenane”.

“An inspired decision”, roared the Watergate Godfather, “I never had a moments worry as she pulled it off in spades” said Gerry, a tremendous judge of a pint of plain or a good golf shot. Cody again fired her into the front line the following year when he enticed her to play Moll in the John B.Keane play of the same name. Again it played to packed audiences for the week, much to the delight of all who have given their life’s blood to the Watergate cause. To complete the hat-trick, Claire is presently in rehearsal for yet another Keane masterpiece, The Field, which stages at the Watergate from August 18th.

Claire is married to Trevor Kirwan, and they live in a beautiful home in Callan. She has seen employment with the much missed Radio Kilkenny, KCLR, Tipp FM., Community Radio Kilkenny City, Supervalu and Avondale Nursing Home. Presently she is employed as a Social Care Worker with S.O.S. She is studying for her Social Care Degree at Carlow I.T.

She enjoys a very active lifestyle being a reasonable golfer with the Callan GC; a vicious Kilkenny hurling follower; a marathon runner; a Ring of Kerry cyclist; and many other such mad-cap disciplines that her Mam and Dad know little about.

It has been a phantasmagorical journey for the lady from Callan, one that has been so rewarding for her and all of her friends.

The Watergate Theatre has been good - great even - for Claire Henriques, relative to the many traumatic episodes that she has encountered. But in truth, it's been a two-way street. She is at home on the stage, amidst the dry ice, the smell of the greasepaint and the roar of the crowd. She has mastered the endearing quality of gathering her audience around her feet and giving them what she feels they need and paid for. She plays to their every whim and need. As the old Radio host would say, she gets the audience to turn on the knob. And she will defy them to turn it off with the electricity of her presence.

Claire will return to the Watergate stage in the role of Maimie Flanagan next month, when Watergate Productions stage John B Keane's The Field from August 18 to 20 and 25 to 27.

Tickets are available now from the Watergate Box Office (056 77 61674), or online at www.watergatetheatre.com.