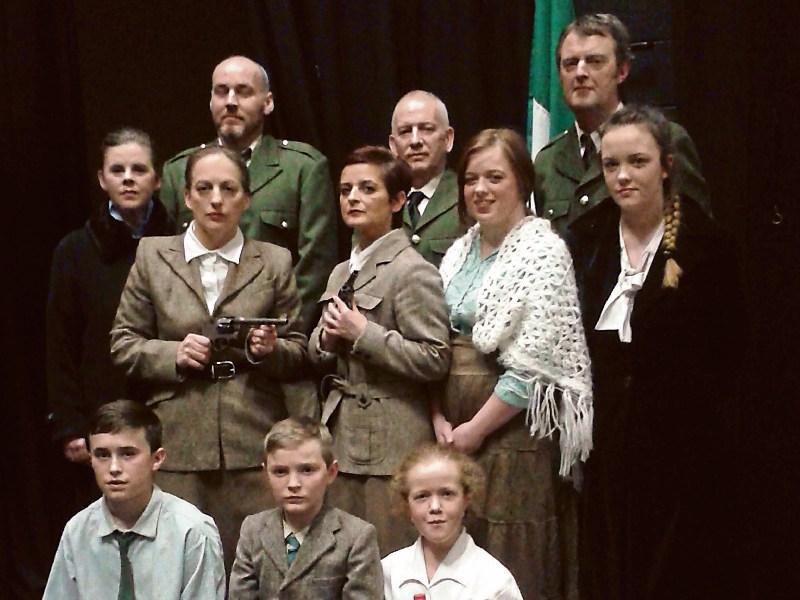 In remembrance and in recognition of the momentous events of Easter 1916, Kilcumney Players will present VOICES OF 1916 in Ionad Dara, Goresbridge on Saturday next, September 10 at 8:30pm.

Voices of 1916 is largely based on eye witness accounts of the Easter Rising in 1916 in Dublin. The Bureau of Military History (BMH) was set up to record the memories of eye witnesses of the pivotal period in Irish history from 1913 to 1921. The accounts on which the play is based were given by survivors during the 1940's and 1950's but were not released until 2003 after the last witness had died.

Thousands of accounts from that period can be accessed on the BMH website and some of those accounts are used in this play.

This year in 2016, Kilcumney Players are privileged to present this play to commemorate the momentous events of Easter 1916 in Dublin-the events that were pivotal in the formation of the Ireland of today. Voices of 1916 brings us back to that historic week in April 1916 and we hear those events retold by men, women and children who were participants and eye-witnesses. The play also includes songs and poems from the 1916 era.

The theatre group that is now Kilcumney Players came about in 1997 as part of the 1798 commemorative programme in the Goresbridge and Borris area.

At that time, there was no further plan than staging Beyond the Telling, a play by Rebecca Bartlett, as part of the bicentennial commemorations in 1998. About 30 people were involved in the staging of that first play and its success prompted that original group to continue with further productions almost every year since.

The cast members are Joe Meaney, Yvonne Devitor, Ciara Murphy, John Whitely, Paul Behan and Elizabeth Keyes. They are joined by 4 new young members-Niamh O’Neill, Leann Wall, Emma Blake and Josh Barcoe. Kilcumney Players are delighted to welcome these new members to the group and to have the opportunity to nurture young talent.

The play takes the audience back to the combat sites of 1916, particularly to the General Post Office which was the rebel headquarters. The story of the Rising is told day by day-from Easter Sunday, through the combat of Easter Week to the surrender and the executions and aftermath. All the words come from the accounts given by participants and eye-witnesses who were present at the events so there is a real sense of immediacy and reality in the play.

Voices of 1916 will be staged this weekend on Saturday evening, 10th September at 8:30pm in Ionad Dara, Goresbridge. Tickets are €5 and doors open at 8pm.