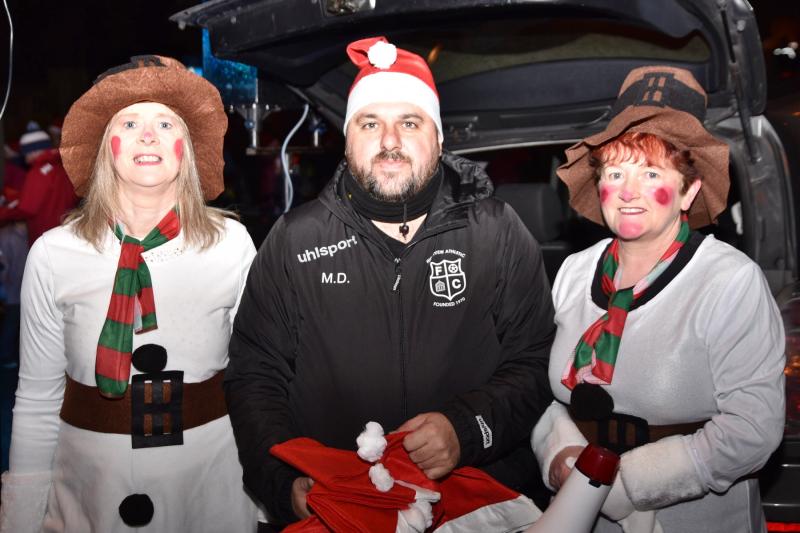 Graignamanagh is bursting with community spirit.
And it was in full flow on Thursday night for the arrival of Santa who helped with the turning on of the Christmas lights.
And the success of the Split The Pot, the Love Graig money-making initiative which benefits everyone in Graignamanagh helped make the arrival of Santa on Thursday night a huge success.
Every child received a free present from Santa Claus as well as candy floss and popcorn.
The Duiske Players drama group and friends, who have given so much entertainment to the people of the town, dressed up as Disney characters, mingling with the youngsters and adding to the carnival atmosphere.
They were: Edel Bolger, Stas Bolger, Ann Hamilton, Theresa Shulver, Brid Moloney, Dennis Meany, Peter Prendergast, Mark Cunningham, Paul Hickey and Damien Kielthy.
Barrow’s Keep restaurant just over the bridge in Tinnahinch provided free truffles.
Not to be outdone Graig Garden on the Graig side of the bridge gave the revellers hot pizza and Duiske Diner also provided hot food. Mulled wine came courtesy of the Duiske Inn.
MCs were the wonderful Denis and Olivia Staunton who set up a disco for the young people who really enjoyed it.
A grotto was set up in the Square and a purpose built sleigh was also created by the organising committee with Niamh O’Driscoll at the helm doing a wonderful job for the town.
Niamh thanked Edward Cahill and Fiachra O’Brien for getting the lights up on time and checking everything was in good working order.
The ground crew, Eddie Cummins, Dominic Canning and Marty Gahan were thanked as were Marie Conran and Mary Broaders, Elaine Cushen, Cathy Maguire, Louise Dunphy and Andrea Wenner; Eoin Bolger, John Cushen as well as Matthew Dunne, Tony Dempsey and Vera Byrne Kelly.