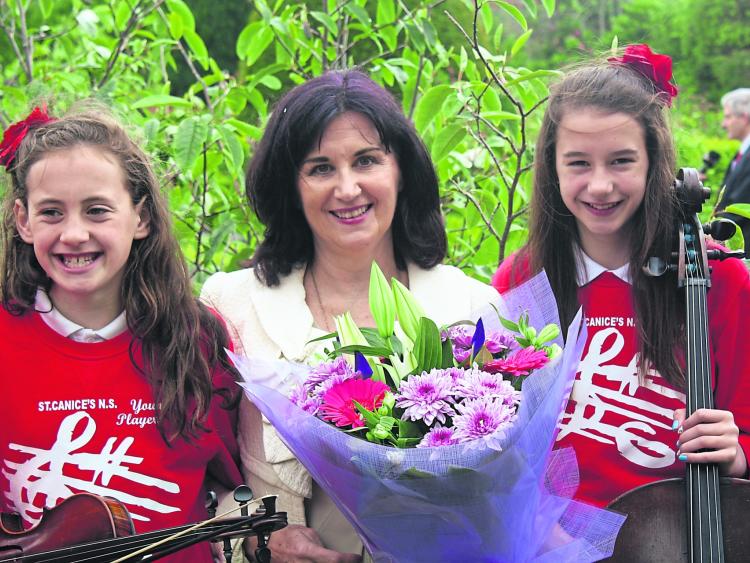 The late Regina O'Leary with two of her former pupils, Sophia O'Shea and her niece, Georgina

March 17 will mark a year since the passing of a truly inspiring and important member of our community.

Regina O’Leary, known as Gina to anyone that knew her well, was born and raised in Kilkenny city and continued to live and work there throughout her life.
As a dedicated primary school teacher she founded a music programme in St Canice’s National School over 30 years ago.
The programme is widely recognised as the most successful in the country and has served as a model for many other schools across Ireland.
It was Regina’s energy, passion and commitment that enabled her to enrich the lives of so many of Kilkenny’s children and indeed, adults too as she believed that everybody had the right to a musical education no matter what their background was.
Her life was cut all too short at the age of 57 after a hard fought battle with breast cancer and her death has left a large void in our musical community.
Following Regina’s passing her family wanted to do something appropriately special to celebrate her life.
“What would Mum do?” was the question her children Ruth, David and Mark asked each other.
There could only ever be one answer - that was to organise a concert in her memory.
Regina organised countless concerts and performances in Kilkenny for over 30 years which showcased thousands of instrumentalists and singers from the city and surrounding areas.
So it felt only fitting to hold one in her honour. The concert will also mark the launch of “Shine Bright - The Regina O’Leary Foundation” which will be a charity set up to support young musicians from Kilkenny to give them access to specialist training from top classical musicians from Ireland and further afield.
Some of Ireland’s stars of the classical music scene are performing on the evening alongside Regina’s family, friends and pupils. One of the guest artists appearing on stage on St Patrick’s Day is West End star Sarah O’Connor.
Sarah has appeared as Eponine in Les Misérables, as Imelda Quirke in The Commitments, as well as having leading roles in Evita and Mammia Mia, all on the West End.
Among the hugely successful and in-demand classical musicians appearing are Fiachra Garvey,
Kilkenny and internationally renowned violinists Patrick Rafter, David O’Leary and Maria Ryan, double bassists from The Royal Philharmonic Orchestra Benjamin Cunningham and Mark O’Leary, Lucy Nolan and Peggy Nolan from The Eblana Trio, principal double bass from The Ulster Orchestra Billy Cole and violist Beth McNinch.
The concert will also feature some wonderful ensembles such as Loreto Secondary School past and present students choir.
She would be thrilled to known that a string orchestra comprised of past pupils and teachers from the award winning St Canice’s NS Music Programme will play on the night in memory to a woman who placed the musical education and enlightmenement at the tip of the curriculum.
Carrying on the wonderful work of her mother, Ruth Morrissey will conduct the St Canice’s National School Senior Orchestra.
Another special treat will come in the form of Arís under the direction of Veronica McCarron.
The willingness of all these extraordinary musicians to give up their time to perform in this concert is testament to the affect that Regina had on so many people.
The concert takes place on March 17th at 7pm and tickets are available from The Watergate Theatre box office and website for €30 each. It promises to be a very special evening not to be missed.