A ‘Romantic Trio’ on show at Mermaid Gallery in Inistioge 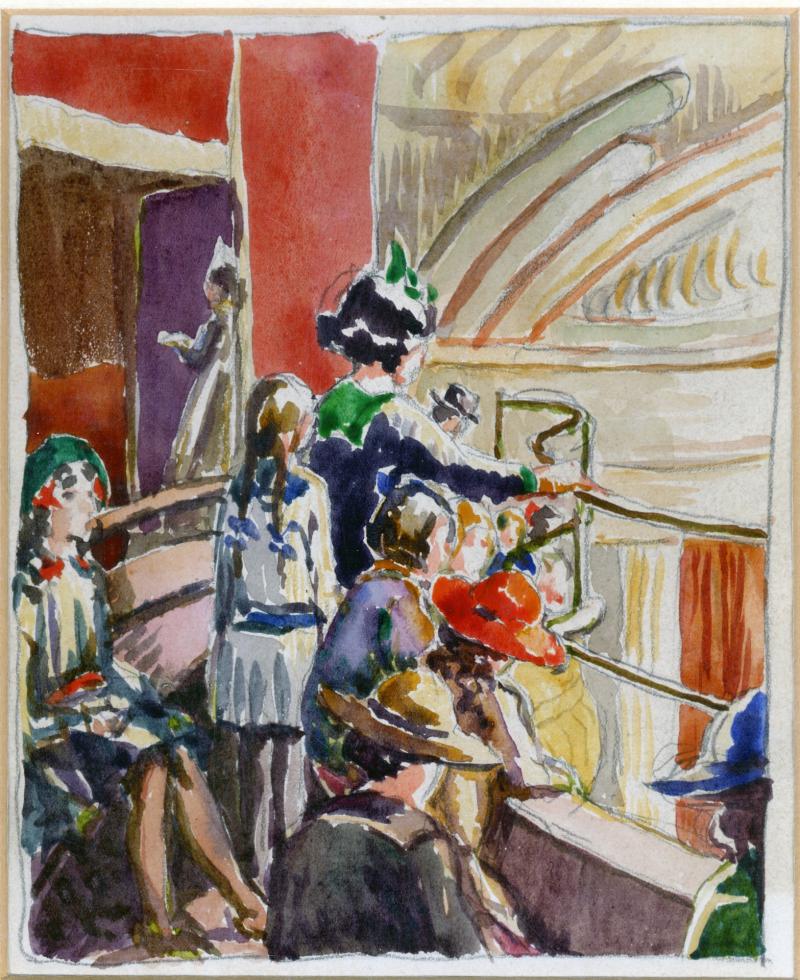 Drawings and watercolours by Mainie Jellett (1897-1944), ceramics by Caroline Couchman, and oils and prints by Amelia Peart, feature in an all female exhibition at Inistioge’s Mermaid Gallery, which was officially opened recently by Mrs Tina Kavanagh of Borris, who has had a life-long interest in the visual arts.
After a few brief words which highlighted the quality of the works on display, set in the domestic setting of a family dining-room, cut the imaginary ribbon and declared the exhibition open, before an assembled group of over 80 people which included two government ministers : Eoghan Murphy (Minister for Housing Planning and Local Government) and Mr. John Paul Phelan (Minister of State).
The latter as most of us know grew up in the adjoining district of Tullogher, while the former is I gather a Dublin native, who earlier in the day made an official visit to Kilkenny city.
But back to the Mermaid’s exhibition which bore the title of A Romantic Trilogy, A Valentines Exhibition of Paintings, Drawings, Prints and Sculptures by these three significant Irish Female Artists.
The thought struck me that here we had three largely successive generations of Irish women: Mainie Jellett who was born in Dublin to well-to-do upper middle class parents in 1897; Caroline Couchman, grew up in a County Carlow ‘Big House in the 1940s and has Kilkenny ancestors, whilst the last of the trio, Amelia Peart, was born in the 1970s. Her mother, Margaret Becker is a renowned print-maker who in 1998 with fellow artists founded the Leinster Print making Studio. The Mermaid Gallery currently has a number of her works: a study of a well-fed blackbird, another of a kitchen table and yet another of a country field-gate, lying ajar, possibly after the cows had left the pasture for the evening’s milking. All three are hugely atmospheric as are her daughter’s oils-on-canvas paintings and prints. One can make almost anything and everything of Amelia’s dreamy, sensitive abstract offerings in oil. Free rein can be given to the viewers’ imagination.
The combination of colours is alluringly attractive and one is struck by the thought that immense skill was required to create these deceptively ‘easy’ mood filled scenes. A faint pink, a golden yellow or even a more sinister dark blue tinged with black, comprise Amelia’s palette in the works on view. Her oils and prints sit wonderfully well in the domestic setting of a family dining room intermingled with the works of the two other artists. The work ably demonstrates her command of print making techniques which includes drypoint, etching and carborundum. It also shows that she is equally at home with brush paint and canvas.
Caroline Coachman’s ceramics are a joy to behold. A pair of gaily coloured male Chinese golden pheasants adorn the dining-table as centre pieces and for a moment one recalls the still-lives of such Netherlands artists as Van Cryp, which often feature exotic birds as well as flowers and fruit. The colours are almost jewel like and one is reminded of the fact that Caroline was a designer of jewellery for the Henry de Laszlo factory in London and that she later worked in the same medium in Dublin. Marriage brought her to Co. Kilkenny where she raised her family. Her twin passions as she says herself are ‘for Art and Wildlife’ which themes are reflected in all her creations in this exhibition. Her works are well balanced and wonderfully colourful and includes pairs of peregrines, falcons, bullfinches and woodpeckers. The latter as well as being hugely decorative are in fact table-candlesticks. Also here are works in bronze and my favourite amongst these is the study of a horse, about to raise itself from a position of repose which is based on a drawing by Leonardo da Vinci. Superb work based on the studies of a Renaissance master. The Royal Library at Windsor has a very large collection of da Vinci drawings. White egrets decorate a jardinière while another has a bluebird at its core. A humble nut dish, milky-white in colour, portrays a clutch of nuts. One of her largest and most complex pieces is a wash-basin unit complete with looking-glass which I have called ‘Neptune’s Toilette’ as it is all sea-green in colour, with fish darting about in every direction. A small mural mirror also reflects the maritime theme.

Mainie Jellett the last artist in this trio hardly needs any introduction. The majority of her works on display are from the early part of her career, prior to her departure for France. Her early teachers included Sir William Orpen and Walter Sickert. Incidentally the gallery has two drawings by the former artist. From this early period we have a delightful drawing of an evening at the theatre and also too a water-colour view of her fellow pupils in their classroom in London.
After a period of study in London, Mainie moved to Paris with her friend and fellow artist Evie Hone, where she worked under the direction of Andre L’hote and Albert Gleizes. The appearance of cubism in her art reflects their training and influence. It is difficult to believe to-day that back in 1923, when she first showed two cubist paintings at the Dublin Painters’ Exhibition, that the critics were actively hostile. The general public were puzzled, an understandable reaction.
She is credited with the introduction of modern art to Ireland. Her death in 1944 robbed the Irish art scene of a major artist. The exhibition has works from this later period too. The exhibition contains over 50v works by these three gifted woman which will continue until the end of March. The Mermaid Gallery opens daily Thursday to Sunday from 10am to 5 with Sunday 12 to 5pm.