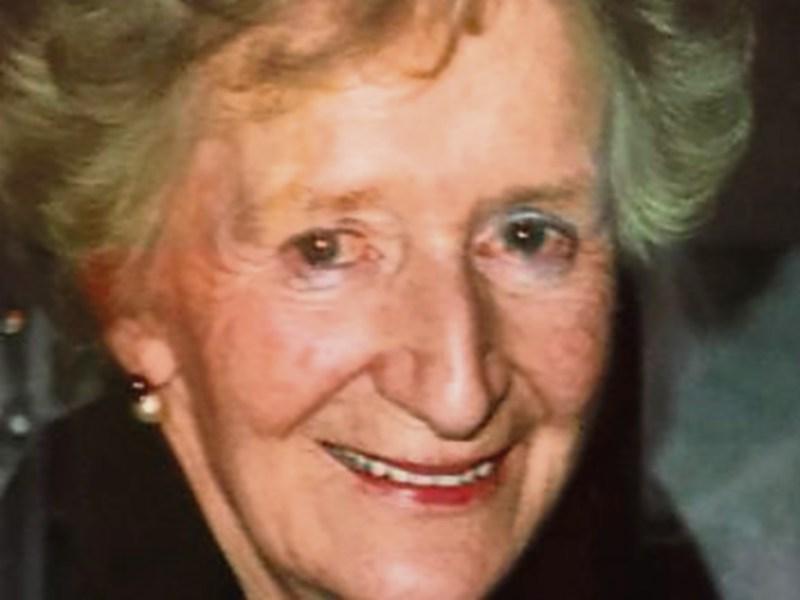 The life of Gertie Dixon, who died on Wednesday July 4 2018, spanned almost a complete century, over two thirds of which she had spent as a resident of Kilkenny City and its environs.

With her late husband Paddy, and their family of four girls and seven boys, she made their home at the bottom of Patrick Street one of the most lively and welcoming places for friends, relations and a wide range of visitors from across the world.

Gertie and Paddy were also key players in the programme of social work and Christian engagement spearheaded by Bishop Peter Birch in the 1960s and 1970s.

Gertie Dixon was born Margaret O’Donoghue on 30 March 1921, the youngest of eight children of James and Margaret O’Donoghue, who were prominent in the commercial and farming life of Edenderry, Co. Offaly. For almost a decade, she was on the administrative staff of the Edenderry Shoe Company, and in 1948 she married Padraic Dixon, a Mayo-born engineer working in the area for the newly-established Bord na Mona.

After a few years in other locations, where they began their family, they moved to Kilkenny in 1951, when Padraic (by now known more familiarly as Paddy) was appointed Assistant County Engineer to Kilkenny County Council.

The Dixons began by living in rented accommodation, first in Dean Street and then in a farmhouse in Palmerstown on the edge of the city. In 1962, they purchased No. 32 Lower Patrick Street, beside what was then the Hibernian Bank.

In the same year Dr. Peter Birch was appointed as Co-adjutor Bishop of Ossory, and as he began his radical approach to the living out of the Christian message, he soon identified Gertie and Paddy Dixon as potential collaborators.

Over the next twenty years both of them would become part of the network of people from all ranks of society who took up the challenges set by Bishop Birch’s agenda. The bishop looked to Gertie for her practical skills and extraordinary energy, and as he tried to bring help to deprived families, she could be depended on to assemble a team and make things happen in double quick time. She was even able to bring some of her flair for fashion and style into areas like the provision of clothing, laundry services and home management.

But Gertie was also part of a small circle who advised and supported the bishop in his thinking and planning, a fact acknowledged by the presence at her funeral of Sr. Stanislaus Kennedy, who headed the professional team in Kilkenny Social Services in its early years.

Paddy played a more behind-the-scenes role, advising the diocese on engineering matters in relation to church building and working on projects like the Cursillo Movement, described as ‘an encounter with Christ, self and others’, which Bishop Birch introduced from California; Paddy was part of a Kilkenny group that took the movement to Nigeria.

Throughout her life, Gertie Dixon maintained a totally positive outlook that saw only the good in people, and focused on how she could help those in need. She also had a great and simple faith, with a lifelong attachment to prayer and charitable works.

In later years she was able to indulge her interest in the wider world, visiting her far-flung clan, and enjoying with Paddy an annual two-month sojourn in Spain, where sadly he was to die suddenly in 1997 at the age of seventy-eight.

She saw her children succeed in roles and professions in both Ireland and abroad. The four girls followed their mother’s love for international travel, being located at various times in France, Switzerland, Brazil and the United States, though sadly her daughter Miriam died in a car crash on the continent in 1974.

Her seven boys all chose different areas of endeavour – veterinary science, public service, wealth management, chemical logistics, antiques, commercial photography and interior decoration – in Dublin, London, Edinburgh, New York and San Francisco. She was proud and beloved of them all, and of the forty-plus grandchildren and great grandchildren who have kept the familiar house in Patrick Street alive with youthful gaeity down to the present day.

This gracious lady of Kilkenny, who touched and brightened so many lives was buried in St. Kieran’s Cemetery after Mass celebrated by Fr. Kieran O’Shea in St. Mary’s Cathedral on July 10 2018, the day after her husband would have celebrated his 100th birthday.

May she rest in the eternal peace she so richly deserves.