Push for village to fulfill its potential in a community that values tradition, crafts, heritage and arts and makes full use of its amenities and resources 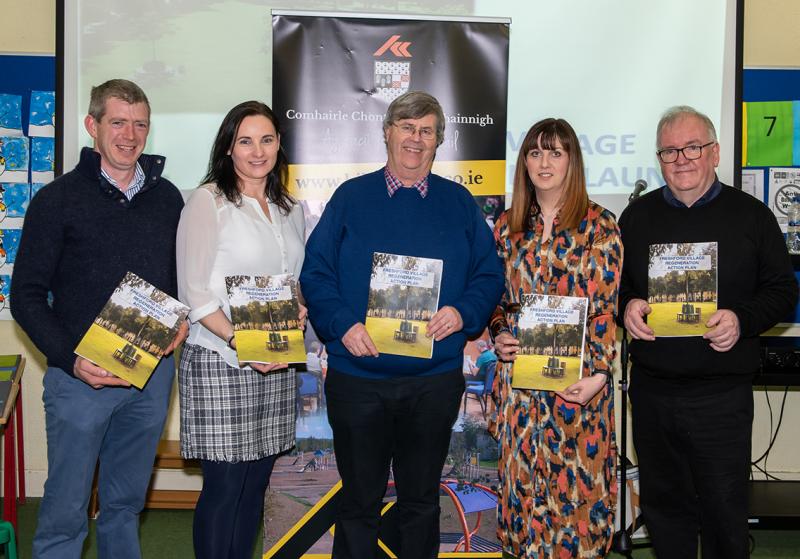 A blueprint to accelerate growth and copperfasten the future prosperity of Freshford was launched on Thursday night in front of over 100 people at St Lachtain’s National School.
The Freshford.ie group pinpointed a number of developments in the report that they would like brought to fruition including the regeneration of the Odeon Cinema which cannot go ahead without another key objective of the plan going ahead - providing a safe pathway between Bohercrussia Street and the Millennium Park that would enable better use of the park and facilitate a playground there.
The exclusive new hotel at Upper Manor Court, on the edge of the village, will open later this year providing a major boost and if the objectives in the plan can be attained it will further enhance the attractiveness of this special place.
This Action Plan is the key that will unlock Freshford’s potential and make it a friendly and attractive place, a community that values its proud tradition and crafts, its heritage and arts, its facilities, its natural amenities and its resources.
The booklet is really a development plan for the village which needs a push in the right direction to fulfill its potential.
Over the last number of months, various teams in the village worked on the preparation of the plan, facilitated by the Acorn Club Freshford and Michael Delahunty of Kilkenny County Council.
The main areas looked at were: Heritage, Tourism and Environment; Economic Development and Employment Public Infrastructure; Health, Childcare and Education and lastly, Sport and Recreation.
The Freshford Action Plan with inclusion at its core, is the road map that will forever change Freshford and help to secure its viability, vitality and economic future over the next decade.
Kelly Looby, chairperson of Freshford.ie explained the background to the project at the launch and thanked everyone for their hard work over 14 months.
Michael Delahunty, now retired from Kilkenny County Council, was delighted to facilitate the formation of Freshford.ie and help the organisation to define its shared vision, mission and values along with providing a blueprint for the preparation of the report.
He promised to make himself available to the organisation going forward.
Noel Cleere, Chairperson of The Acorn Club Freshford said now that the feasibility study phase had ended, negotiations for the commencement of Phase 1 (The Millennium Walkway and Bridge over the Nuenna) would soon begin.
Co-operation
“This Phase would be driven by three local organisations (Acorn Club, Freshford Heritage, Freshford Playground Group) which clearly demonstrates a new mature level of cooperation, unity and common purpose in the village,” he said. “The audience were thrilled with the potential the project offered.
Consultant Ciaran Lynch spoke of the possibility that the old Girls National School/current Parish Hall may be suitable to be repurposed for community activities and services.
Kilkenny LEADER Partnership in conjunction with Freshford.ie and with the support of Monsignor Kieron Kennedy and Freshford Parish are conducting a feasibility study to assess the needs of the village and the suitability of the facility to house them.
Mr Lynch encouraged all present to complete the Freshford Community Survey whose results would play a key role in the overall plan.
Gerry O’Reilly
A special tribute was dedicated to the memory of the late Gerry O’Reilly who, as part of the Acorn Club and as a Freshford.ie facilitator, played a significant role in the formation of Freshford.ie and ultimately in the preparation and publication of the Freshford Action Plan.
Gerry’s love for and his lifetime commitment to the community were warmly remembered.
Chairperson, Kelly Looby extended sincere thanks and appreciation to all those who attended the launch and to Kilkenny County Council, Monsignor Kieron Kennedy, all the clubs individuals and organisations that make up the Freshford.ie team for their support in the creation and publication of the action plan.
Kelly also extended her sincere appreciation to the catering girls, the stewards and everyone who supplied the food and refreshments.
Thanks were also extended to Cllr Malcolm Noonan for coming to the launch. He regretfully had to leave early to fulfill a previous commitment in Kilkenny.
Special thanks were extended to Brendan Tynan (principal), the teachers, staff and Broad of Management of St Lachtain’s National School along with Freshford Squash Club for providing the team with their facilities free of charge and at short notice at times.
Action plan booklets were then distributed among the audience. The evening was a great success and positive reviews continue to pour in. The plan will be available in all local outlets soon.
Reception
Everyone arriving into the hall on the night were treated to a wonderful reception with food and refreshments to suit all palates.
The soup and scones provided by the Parish Hall development team were truly welcome on that cold evening!